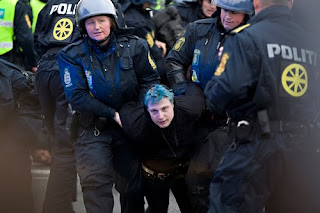 Down in Bama, typically before you go on a hunting episode in December, you start to think about the mess you are getting into.

First, there's the 30-degree temperature usually. It's wet....raining....maybe even snowing. You have to dress for what is going to occur over the next twelve hours.

Then you have the food episode. You probably won't be near any place to eat....so you bring along some Army MRE dinners, some candy bars, or a box of poptarts. You put a beer or two into truck to sip as things kinda slow down. And you might even have a bag of beef jerky.

Then you go to the issue of toilet paper. You have to go in some might bad places....and just do your business....as best as you can.

The truth is s that a Bama guy prepares for the mess he's about to get into.

So this week....especially on Saturday.....the climate conference in Copenhagen kept itself in fifth gear....roaring down the street. Typically....protesters come out of the woodwork....and try to turn a quiet conference into a big huge protest of sorts.

Up until six to eight years ago....cops just came out and did a two-star job of managing a mess like this. The protesters always came out ahead and caused a big mess. But at some point....the Brits sat down and started to study how protests run and how you can "manage" a mess like this.

This weekend.....the protesters in Copenhagen are furious. The Danish cops....managed the mess quiet well on Saturday. There were 968 folks arrested....quietly, and without a terrible amount of effort.

In fact, the cops got smart....and some folks are upset that protesters were held for hours....in freezing conditions....without medical attention, water, toilets, or food.

It would appear that the cops went into a slow routine on releasing the prisoners....because they knew they'd move to come back to being part of the climate protest.

The sad truth is that bunch of Bama hunters are better prepared for freezing December action for twelve hours....than a bunch of wussy protesters in Denmark. The Bama guy would have toilet paper in his suit.....beef jerky.....a can or two of beer in his backpack....and a pack of smokes to keep him going for twelve hours. These protesters might want to take some time off and hang out with some Bama guys......to get smart on survival tactics.
at Sunday, December 13, 2009 No comments:

On the Winds of Gitmo

Based on commentary of some Department of Justice letter leaked to the press....it appears absolutely certain now that the Gitmo folks are going to Illinois.

The letter didn't lay out alot....just an initial announcement of sorts. My guess is that someone would have said something around the 22nd of December....to avoid real media coverage during the Christmas period. It's a great time to announce negative news.

For the crowd sitting at Gitmo presently....I suspect that they are going to be highly negative over this change to Illinois. You can plus-up visits by lawyers and civil rights players....but basically....you end up in a Illinois prison. Given a choice....I just might prefer Gitmo in Cuba....than any prison in Illinois.

What I'm waiting for....is Comedy Central to pick up the whole Gitmo episode....and play it like Hogan's Heroes. The incompetent American commander is played by some Col Klink-character. The chief of the guards....Sargent Shultz. Add in the background of an Illinois prison....and I think this would be a five-star show.
at Sunday, December 13, 2009 No comments: