Something on My Mind 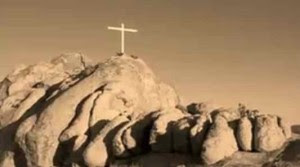 For a fair amount of time...I've been following the Mojave Cross episode. Out in California, on a national property, federal property to be factual here....stands a cross. It was placed there roughly 75 years ago to give a simple bit of respect over World War I vet's and those who never returned.

At some point....folks came to get upset about the cross on federal property, and wanted it removed. It wasn't right...at least in their minds.

This case went to the Supreme Court and it was finally decided that it'd be there long enough...that it wasn't necessary to remove it. Case closed. I suspect that the justices really didn't want to have a say in this because it was fairly stupid to bring up a case like this in the first place.

Folks were still upset. So in the last month...the cross was stolen. Someone went there in the night...probably three to four folks because of the effort and weight involved...and took it. A reward was posted. Locals are a bit upset about this behavior involved. They don't think it was a local.

So, this twisted story took another turn yesterday. Folks woke up and a new cross was there on the site.

It was up briefly....until federal officials appeared and removed it. Amusingly enough...the Justice Department is involved and they ordered it removed because its not the actual real cross...and the Supreme Court ruling in their mind...only covers that cross (naturally).
I've sat and pondered this whole story.
For someone to have this frame of mind to get upset about the cross in the first place...there's something wrong.
For someone to gather a friend or two and remove the cross from the hilltop....there's something wrong.
For the Justice Department to have this much interest in a episode like this....there's something wrong.
After a long pondering....I think what this region of the Mojave Desert needs.....is 10,000 crosses....concreted a good four feet in the ground. In fact, you can plant 100,000 crosses....all the better.
The guys out there who are really into this matter....need some good physical work to get their mind back in order. And I suspect the Justice Department involved....might need an introduction of quantity versus stupidity rules. If you put enough ball bearings in a guys pocket....he will eventually fall to the ground.

The “Something on My Mind” is that the Justice Department doesn’t include even one individual who has a mind to use or have something on.