It's nifty living in the DC region.  You start to grasp things that are a bit different from Bama or a normal state area.

For those of you who didn't know....this area (Capital Virginia, DC, and Capital Maryland)....have state governments which are fairly broke.  For years, they operated with fancy budgets, built fantastic empires, and paid nice bonuses each and every year.  Last year, the dam broke...and these local government offices are plain broke.

So a new chapter was written....tax officials in this region are now taking extraordinary measures to collect millions in delinquent payments.  Lots of folks are simply broke and can't pay their property taxes, their vehicle taxes, or even their personal taxes.

I was reading the Washington Examiner this morning....they quoted that $40 million in the local area is owed just overdue real estate taxes. 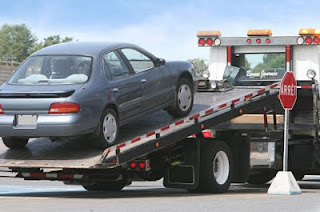 The boys are now taking on new ideas to get income.  They give you a notice....then they drive up to your house.  They hook the cable up to your car, and legally grab it.  For the first couple of months....that worked and people would show up to pay something on their taxes.  But now?  The tax guys admit that folks don't care....and they won't show up to get the car back.

One of the counties in the local area will refuse to re-register your car if your taxes aren't paid up.  So in effect, you could be in a position where you can't drive to work..... and you are simply stuck with public transportation as your only way to keep working.

The longer that this current economy continues in this trend....the deeper this mess will get.  Imagine all of 2011 running at the same pace.  State tax collectors will likely find themselves eventually stuck with a bunch of 15-year old cars and no real market to sell them.  At the other end....are government services folks (library managers, traffic cops, and parks management) wondering how things will run in the long-term.
at Thursday, October 21, 2010