My Neck of the Woods

Two items of interest which won't be in the national news.  Thus the life of a poor Bama guy living in DC.

First, we had a second escalator episode with the METRO folks.  The first one....if you remember....last weekend....involved a escalator which came to a halt going up and then started going down (the brakes failed).  Going at three times the normal speed....which caused a couple of folks to get wounded.

Well....a second escalator this week went into the exact same situation.  It wounded a couple of folks as it threw them off at the bottom as well.

The METRO folks kind of met in a hurry and declared that all 560-odd escalators across their mighty empire of Maryland, Virginia and DC need to be inspected immediately.  I'm guessing some lawyers are checking out the max they could get on escalator injuries and wounds.

Yesterday, I kind of noted about half the escalators that I came across....are broke and you just have to walk the 150 feet up the broke escalator.  The independent company hired to check out their practices (from a complaint several months ago)....came out this week and said that the METRO folks weren't obeying their own written regulations or performing maintenance like they were supposed to.

For a Bama guy....it's a rare thing to see escalators to fail and whip out to triple speed in reverse.....so I'm waiting for a chance to experience this myself.

Now, onto the second topic.  Yesterday, big article in the local Washington Post by some gal and her husband.  It's a woeful tale.  They'd found the perfect house to buy.  It had six acres of property here in the region (Maryland).  Had a pool.  They didn't talk of the price but I suspect it was in the $700k range with the amount of property involved.

These kindly folks went off to the mortgage company.  The couple were professionals and had a quarter of the down-payment in their hands.  I got the impression that both were making over $100k each....and one might have been making $150k, although they didn't want to spell out that part of the story.  The mortgage company?  They refused. 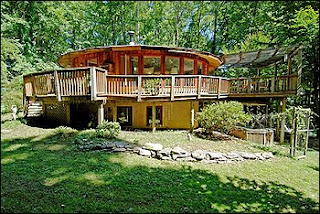 You see....this was a round house....not the typical regular square house.  Now I gazed at the house and it's kinda intersting.  It can't be more than 1500 square feet.  It's got a five-star deck, and the lawn area with landscaping looks mighty fine by Bama standards (although mowing on the hill might take the wind out of a fellow).

The mortgage company said if they defaulted....round houses just don't sell.  Statistically, I don't believe they can prove that point.....maybe I'm wrong....but I think I'm right on this.

So the couple went onto a second mortgage company, and they refused as well....same excuse.

The couple is a bit upset and they would really like to buy this dream house.....but I'm guessing that won't happen.

It's an interesting thing.  Here, there's probably still banks begging to lend out money for double-wide and triple-wide trailers, and even some fixer-upper houses.....even houseboats....but the idea of a round-house?  Nope....banks just won't lend for that.

I'm guessing the couple who own the round-house currently are weeping over this mess.  They own a house that can't be sold for at least a decade (until the bankers get dopey again).  The only solution?  Put four fake walls on the bottom of the structure and pretend it's a real square house.  Once the idiot banker signs the paperwork...remove the fake walls and go back to the round situation.
at Sunday, November 07, 2010