Bring on the Dogs 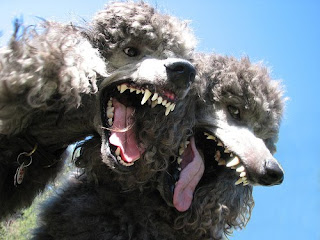 It was a puzzling episode, Ben Nelson, senator from Nebraska and a Democrat....in fierce issues with his Medicare deal in the universal health care package....has asked South Carolina's attorney general to "call off the dogs"....with the state official's threat to challenge the constitutionality of the Medicare package deal.

I pondered this for while....why any Nebraska dude would use the phrase (call off the dogs)...and frankly, it's hard to understand why he'd be bothered over this special deal if it was all legit when he discussed it with Harry Reid. It would appear that he's bothered by the threat on the deal....and how this might get dragged up to the Supreme Court. I'm guessing the Supreme Court will quickly toss the entire deal....without much thinking over the issues. Just a humble guess.

Then being from Bama....I pondered what kind of dogs those fellas from South Carolina have....that would bother Nebraska folks. I eventually came to conclude that these are fierce poodles.

The curious thing about Ben in the last day or two....is that he now insists that Senator Harry Reid....put in special language within the universal health bill...which was merely a "marker"....exempting Nebraskas from its share of Medicaid expansion...and this merely part of a bigger plan in the legislative strategy to press for an “opt-out” of Medicaid expansion for all states.

Several media outlets have spoken of Ben's words here. It's curious that since day one...Harry Reid hasn't mentioned this part. It's curious that Ben Nelson would wait an entire week...just to let everyone know that this was just part of a bigger deal. Why would anyone wait....to clear the air on this?

At some point in the days of Rome....it became obvious to some that some senators had advanced to a point in life where they couldn't grasp the full discussion at hand and couldn't carry out their duties...and the Rome Senate simply took action to "retire" them. I'm thinking that Ben Nelson is way over his head with the US Senate and probably past his prime in grasping various implications of what he votes for.

Over the past couple of weeks...there have been several folks who used a GPS system out in the boonies and really got into deep snow and had to be rescued.

Each blamed the GPS for their problem.

I sat and pondered over this. I've had a GPS for two years now...and will swear by it. But you know....you really need to use it and understand what it gives you. If you say to take the shortest route possible...it will do that, but you can't calculate that this route is safe or makes sense unless you pull out a map and start to analyze where it's asking you to go.

I once accidentally set my GPS to the shortest route possible...and ended up adding 1.5 hours onto a trip because it was looking at mileage only in savings. I quickly learned to use the default setting and never mess with this optional area.

In the cases demonstrated in the news...almost all of these folks got a brand new GPS and didn't fully grasp how to use it. So...it's their issue...not the GPS device.

I hate to suggest it...but you almost need to make people come to some 2-hour class...just to understand a GPS and the threats that it might pose.
at Saturday, January 02, 2010 No comments:

The order came this week from the President. The US Post Office will apparently play this magnificent role in distributing medical aid in the event of a biological attack. This was an executive order...so they can't really refuse it.

The best we can say is that various government agencies, local law enforcement and the US Post Office are supposed to work on a model of sorts. Then the distribution of medical countermeasures would occur. Naturally, you need a biological attack first....in case you were wondering.

The quote from the order: "This policy would seek to: (1) mitigate illness and prevent death; (2) sustain critical infrastructure; and (3) complement and supplement State, local, territorial, and tribal government medical countermeasure distribution capacity."

I sat there....not wanting to insult my dad's old occupation (rural carrier for the United States postal folks)...but seriously...this is the actual plan and the guys you expect to deliver essentials?

The theme would be this huge regional post office which could save 300,000 people in this area....but the incompetence bred over 100 years...has made this a questionable act. The mail carriers argue over union rules. The manager is doped up on pain-killers twenty-four hours a day and is in the midst of a trans-gender operation. Back-office Willy (played by Ben Stiller) is their only possible hero, but he's got girlfriend problems with a Argentine dance hostess.

So DC postal headquarters sends a special team to this regional post office...made up of crackerjack office freaks and no real management skills. All of the delivery vehicles fail (they switched to bio-diesel for some reason) and a sudden and massive delivery of Wal-Mart boxes flood the distribution center.

I'm willing to share my script with the right producer ($2,000 and a pallet of Pabst would be sufficient).

I stopped at the point to seriously ponder this. How would the various government agencies, law enforcement, and the Post Office folks ever meet? These are three groups which would never meet in any room, for any reason. You could even call for a meeting in New Orleans with free booze and six weeks of five-star hotel support....and they still wouldn't meet.

This all looks good on paper....but my guess is...when the crap finally hits the fan....you will see the President call up FEDEX and ask if they can deliver...and the CEO of FEDEX starts to weep and say: "Yes, sir....we can deliver until hell freezes over". And the President gives FEDEX a $50 billion contract to save America in a crisis. Honestly....it can only end in such a classic moment.
at Saturday, January 02, 2010 No comments:

Apophis and the Threat

There is an interesting story which came out about a week ago...discussing this asteroid Apophis.

For a fair amount of time....folks have known Apophis is heading toward the Earth's direction. Some odds started out at 1 in 36,000 that it would come near the Earth to be a threat....then it went to 1 in 400,000 and higher. These numbers get tossed around in science publications and the media. Everyone is all happy that these scientists are that smart and can pretty much say this is not a threat.

This week however....some Russian scientists came up and said that an effort is necessary to absolutely ensure the asteroid will not hit the Earth.

Some folks are scratching their head over this. Why worry if the odds are 1 in 400,000 of hitting the Earth. We can agree....it would be a catastrophic collision if it did hit.

Basically, the Russians want a couple of hundred million.....mostly from everyone to work on this asteroid killing device. They even used the quote: "We are talking about people's lives."

I pondered on this. Apophis is about 1,150 feet in diameter. If it did hit the Earth, it's believed to be able to create an area of destruction of the size of France (which is fairly big). There is some argument....just destroy the asteroid or just move it....which either would be fine with me.

So what's going on?

There are two scenarios here. First, the one where the governments are lying and it's fairly close to hitting the Earth....like 1 in 6 chances or so (my numbers). Would NASA lie? Well....they've made up stories on global warming without any issues.....so what would a bit more lying cause?

The second scenario is that the Russians have finally grasped the method of getting money from everyone by making them all worry about false conditions....like global warming. So they want to get in on the big money deals. By making up a big worry here.....you suddenly trigger governments into some false sense of doing something when nothing is required. Kinda like climate change and global warming.

So the question is.....should we worry about something that might occur in 2036? If it was to occur and the truth came out tomorrow....then the stock market would fall a 1,000 points in one day. You'd have hundreds of thousands of mentally ill folks committing suicide.....all in one day. You'd have massive government fraud suddenly go turbo.....and nothing would be saved for any event.

It's hard to judge this situation. Maybe the Russians are lying. Maybe NASA is lying. Maybe this or maybe that. Seems like a fine movie for some guy to make.
at Saturday, January 02, 2010 No comments:

Not Even a Game Anymore

I came to a point about ten years ago where I just stopped watching NBA basketball. It was a league filled with wannabe stars who were pretending to be in the same league as Walt Fraser, Larry Bird, and Freddy Brown.

Christmas eve night....yet another reason why I can't stand immature behavior of the players. There were two guys on the same team....wrapping up after a game....and they drew pistols on each other in the locker room. This was apparently due to some gambling debt between them. I won't mention names...but one was an NBA all-star....which in this wannabe-league...doesn't mean much.

Apparently...having pistols in such a building is a violation of sorts in this town. The cops are checking the situation out and the DA is involved. Some charge will be invented and I'm pretty sure both will get probation of some type...and then the NBA management staff will get involved.

At one point within the NBA....you had to exit out of college at the end of four years and a degree...to make the NBA. Then they got rid of that rule because a bunch of guys were ready to leave after a year or two. So then they even went and made it where a kid could finish high school and go straight to the league. Somewhere in the midst of this mess...they lost half of the maturity that you got with college grads. And they really don't care...it's merely a money-making game and nothing else now.

So this is how I lost my appreciation of NBA basketball...and how it'll never return.
at Saturday, January 02, 2010 No comments: