The Geography of a Terror Trial

I sat and pondered over this for a good hour or two....and came to five choices:

1. Club Gitmo. Face it....we've got the facility built. There's a airport and harbor there. We have a couple thousand Marines ready to take down any threat. It's a US installation with water, electricity, septic tanks, beer, and plenty of fast food. Local issues? None. Possible threats? None. Extra cost? Zero.

2. Rent a cruise boat and anchor it off the coast of New York by twelve miles. Surround it with four US Navy vessels and put three hundred Marines onboard. The cost? Probably around $3 a month for food, booze, and clean sheets. Security? Never an issue. Threats? Well....other than backed-up sewage and refueling every ten days, that's about it.

3. Death Valley. First, it's a national park....so there's no rental cost. How many Islamic characters might show and make a threat? I just can't see it happening. Facilities? Well....we toss up a dozen military shelters, a big shade for folks......and a ice cooler. Folks around Death Valley getting upset? I kinda doubt it. In fact, other than a bunch of reporters freaking out over the heat....I don't much of a problem.

4. Northern Alaska. Let the military set up a base of operations in the some mountainous area. Bring in a dozen temp buildings and get people squared away to accept remote conditions. If some Islamic characters show up....they might be surprised about the reaction of local Alaskans and how many weapons they all have.

5. Finally, there are a couple of Atolls out in the Pacific that the US owns....lock, stock and barrel. Put up a couple of temporary buildings and a support vessel of some type....and start the case. I wouldn't worry about Islamic characters appearing out of thin air. As for protection, let the US marines put up some protective details and just let the case go as quickly as possible.

The truth of the matter is that nobody in the US wants this case in their backyard. That's how bad this whole thing has become.
at Sunday, January 31, 2010 1 comment:

The saga of the terrorist trial in New York City continues.

The trial appears to be headed to Newburgh, NY now. It's a town about sixty miles north of New York City. So downtown Manhattan is now safe. As for Newburgh? Well.....I just sat and watched an interview the the Orange County commissioner (Newburgh's area).....and basically, those folks aren't happy at all.

The commissioner's threat? He says he can shut down roads throughout the county, and he might have another dozen powers that the Federal guys never anticipated as being a threat. I'm guessing various lawyers are stepping in and making suggestions here. The power to turn off electricity? I don't know.....but I'm guessing that the county commission just might have that power. The ability to turn off water and sewage? Same thing.

I'm guessing as the next week unfolds....Newburgh is going to show itself to have more powers than the Federal government realized. What's left then? If you want any terrorist case held in New York state....which appears to be the agenda.....then you are left to a Army or Air Force base. No county can truly threaten its local military base....without a massive reaction. If a commander deems some local town or county is threatening him, his mission or his people....he orders a ban on that district. That means no purchases, no beer sold, and no tax revenue. A six-month long case.....could bankrupt a local town if a commander put up a ban.

The other alternative? Go to Gitmo, and run the case there. Over the past week, I've heard several political figures from both parties starting to suggest this. I don't think the President wants to admit defeat yet....but it'll be curious how he overcomes the mighty powers of a little town in New York state.

One part of the President's agenda unveiled this week....centered around $8 billion going to bullet-train construction.

No one is saying for sure where the $8 billion will go....but the smart guys are already betting on California. There are at least a dozen plans sitting out there.....almost all with zero funding. You see....selling bullet-trains....just ain't that easy.

This is an interesting history and business lesson. The French, the Japanese, the Chinese, and the Germans to some degree.....have bullet-trains. All of these....required massive government funding to make them functional. To be kinda honest.....none of them today....truly pay for themselves, and so other "funding" ends up coming out of somewhere....to make the whole thing continue on.

The key feature of a bullet-train....is that you go from point "A" to point "B". One train station to another train station. The speed? Typically over 200 mph. The luxury? What would be a eight hour trip by car....occurs in less than two hours.

First, you have a special track requirement and you can only go from point "A" to point "B". Say in this case, LA to San Fransisco. If you want to go anywhere else...it's the vanilla track and 75 mph. So you spend mega-millions, to make this special track occur.

Then, we come to riders. Typically....it's not the lower-class workers who ride such a train. Remember....this is a $100 ticket typically....or more. So it's a decision that a middle-class or upper-class family is making.

Then, we come to time. If the amount of time equals airline travel....is there any advantage of a bullet-train over an airline? No. There really isn't any real advantage....unless maybe you count the station downtown in San Fransisco as your real final destination and your 4-star hotel a block away makes the perfect place to stay.

Historically, there are lots of plan's sitting on the shelf because no one can find real funding for this idea. The plan of getting a bullet-train from LA to Vegas? Of all the plans out there, this is the only one with financial payback possibility....the rest are built on imaginary profits without incentive.

The German effort? Well....they built their bullet-train track from the Frankfurt airport (one of the major hubs of Europe), to Koln (about 100 miles to the north). The sell here was the business side of operations sitting in Koln and quick easy access to the Frankfurt airport. The ticket? Well over $80 one-way. Who rides? It's about seventy-percent business related traffic. The mom's and pop's usually just drive down with their car or take the regular train which is a quarter of the train price. There are other plans on the shelf, and some will be built....but truthfully.....the Frankfurt train isn't a greatly profitable deal and I would question if they make any real profit to pay off the construction.

So this $8 billion is more or less a pay-off to someone. My guess is that political folks in California will make a fair 'profit' off this deal and some of their friends are in the construction business. It'll take three or four years to build this and it'll go well over the $8 billion mark.....requiring the US government to fund another $5 or $7 billion to finish. The profit? Don't be asking silly questions like that. It'll never show a real profit.

What this really does....at some point about six years into the future....is cast a giant shadow over future construction in America of a bullet-train system. People simply don't travel by train any longer in America. It's one thing to travel forty miles by some Metro-like system.....but the idea that you would travel 400 miles by train? No.....and speed doesn't influence that decision. In six years.....the numbers will be added up and we will realize that bullet-trains are a farce and the airline industry will breathe a sigh of relief. 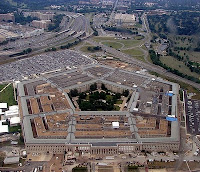 At my age....I've probably attended around fourteen hundred (1,400) meetings in my life. Meetings are long and drawn out. Ninety percent accomplish little to nothing. You would beg to get out of some of these. When a meeting runs past one hour.....I tend to start rubbing my knuckles and daydreaming.

So you are scratching your head, and wondering about this meeting?

Well, it's the Pentagon building facility meeting. Yep.....it's the big guy of the Pentagon that runs all of the engineer business and projects related to fixing or keeping the building open.

The guy running it....a comedian of sorts. I would wish that some reality show would come up and just walk with this guy for eight hours a day....and put it on TV each night.

I was utterly fascinated.

You see, the Pentagon is about sixty years old. It's not a perfect work of art. It's been rebuilt dozens upon dozens of times. 9-11 shook the building at its roots.....but truthfully, you can't harm this building.

So on a daily basis.....there are all kinds of things going on....toilet spillages, power outages, broken escalators, broken fryers over at Popeye's Chicken, and water fountains that need to be fixed.

So for an hour, I was entertained. The meeting went from topic to topic....with history handed out every two minutes on this problem and what happened in 1988....and how this problem led to this fix....which led to another problem later.

The odds of me returning? Well....my new guy coming into the office is supposed to attend (he arrives next week). But I'm thinking (probably selflessly) that I ought to be attending this meeting.

So for an hour each week.....you might see me gleefully smiling over a silly meeting but in my mind, it's best damn meeting that a guy could ever attend. And yeah, I'll be there.