A No Value Story 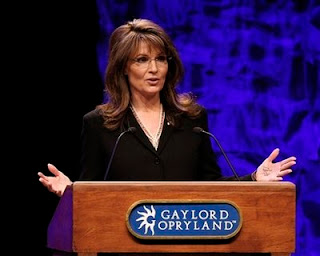 It's a big story. The camera guy this past weekend at the Tea Fest in Nashville...got the image of Sarah Palin with something written on her left had.

I sat there. At one point in my life....I used to write on my hand. It became a once-a-day habit....then two comments a day. I worked with a guy who came up and had a seven-digit phone number and a female co-worker's name....which my associate's wife saw and got all hyper about. It took a week to get that explained and accepted.

After that event....I sat and looked over this stupid habit and then started carrying a yellow sticky pad in my hand at all times.....then I graduated over to a spiral notebook. I left the written-hand notes and moved to the professional stage of life.

Over the past five years, I've come to notice this habit. Generally, an individual who does the hand-notes....is a person is pushed on time and handed facts, telephone numbers, and figures which they need to remember and they can't keep up with all the vast knowledge handed to them on a minute-by-minute basis.

It's bad when you check into a upscale hotel now....and they hand you a stupid plastic card with holes cut into it and tell you this is the key for room 606. Then you notice there's nothing....on the card, the receipt they give you, or anything else.....that says 606. So a guy immediately grabs a pen and writes 606 on their hand.

It's bad when you have a car problem and talk to Rick at the maintenance desk and he mentions that he can fit you in at lunch with Javier. You are standing there with a cellphone and trying to remember Rick and Javier's name....because you know as you arrive....the dimwit Judy is sitting there at the maintenance desk and you keep trying to remember the two names but they escape you and Judy refuses to help you remember. So you get into the habit of writing guy's names on your hand because of idiot helpdesk people like Judy. If you had written Rick or Javier on your hand, it might have helped.

It's bad when you go with someone to the airport and park the car in the short-term parking area, level 4, parking spot 433....and two hours later, you are at the parking ticket machine.....ready to get to your car.....but you can't remember where it's located. If you had written ST-4-443 on your hand, it might have helped.

The media has chosen to pick on Sarah Palin. But the funny thing is that if you walked into any government complex or major business in America....you've got ten percent of the folks with the same hand comments on their palm. They are attempting to make a point....but you prefer to laugh when they bring this up.

My guess on what she wrote? She's at the Opreyland hotel complex.....a fairly big and grand establishment, so I'm guessing it's her room number and she wrote it to remember later as she finished and needed to locate it later. Does it matter? No. And that's the real story about this media story today. It's a story of no value.

A Laugh for A Moment 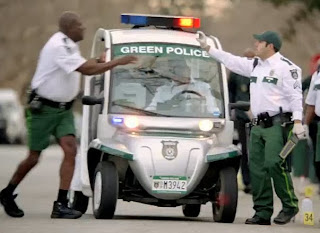 At some point during the Super Bowl...there came the Audi "Green Police" commercial. I found myself laughing and amused by the entire episode.

It reminded me greatly of Germans and their tendency to get past the normal idea of running a program and reaching a point where you police every single detail.

When people arrive on Thursday before the garbage guy and start to shift through your garbage by the road....to look for unsorted plastic or paper that ought to be in the paper can....then you will feel some hostility. When they find batteries in the regular garbage and hand you a $40 fine, then you will start to scratch your head and wonder how you got started in this mess in the first place.

So it was a good moment of reflection, and sure....have a laugh. But around 2030....when things like this start to happen and you start to reflect up on life....you will remember this commercial.
at Monday, February 08, 2010 No comments:

Sometimes...you note some announcements that make you scratch your head and start a turbo episode of pondering.

This morning....I came to read the newest from the administration. President Obama will host some type of TV forum...with Republicans and Democrats...on health care reform. It's currently scheduled for the 25th of February.

This meeting of the minds...is supposed to "reach across the aisle", not start over as some folks might think. According to comments from the President....this is to air Republican ideas which exist and are out there.

I sat and pondered over this.

The President has basically agreed that nothing from the 2,000 page current bill can survive. He isn't admitting this in some grand public fashion...but it's basically dead and nothing can be saved. Reality has come to the White House....finally.

So the best tactic to perform now...with a anchor dragging the Democratic package...is to hook the Republicans to the anchor in some fashion. He has to make them saddle up and come up to admit what things they would agree to. Around Christmas, the Republicans did come out with a package of sorts...much smaller and certainly less than 2,000 pages. It was geared to lessen the current cost and provide tax incentives for folks to make their own decisions. There is NO public option within that package...just if you were wondering.

If you lined up the top fifty far left Democrats...there's little to nothing about this Republican package that they can agree to. They've said that in public and they've got various special interest groups poking them to keep saying this statement.

But here we have this TV forum...where the cameras are focused on them and the President standing there. These fifty far left guys are going to have to smile and nod their head on some things and at least pretend they are somewhat agreeable.

Face it...this televised meeting is scripted and there are a army of guys sitting there currently writing the script for each senator and representative to memorize and repeat.

My guess is that a simple 300-page document will be ironed out of this televised meeting and passed within four weeks of the TV meeting. The special interest groups will be furious. The folks expecting a public option will be hostile and angry. The folks expecting massive overall will be upset. At least one hundred Democratic senators and congressmen are going back to their district to explain how they failed on their promise.

My suggestion? This is likely to be a two-hour episode on TV with this open discussion. It'll be a Thursday night. I'd start to review the TV guide and see if WWE wrestling, Land of the Zombies, or Best of Hee Haw comes on...maybe you should consider watching some of those fine shows and just skip the health care debate.

Oh, and if they don't come to any agreement with this staged event...I'd invite Judge Judy or Doctor Phil to Meeting II...and if a Meeting III is required, we ought to go to Glenn Beck or Donald Trump. Another option is to allow water pistols for all the participants or let them wrestle until the last guy is left standing (that's my Royal Rumble suggestion).
at Monday, February 08, 2010 No comments:

Well....we've been dismissed from work on Monday. Buses and trains are stalled and will not be running. The main roads are 75 percent cleared, but there thousands of small streets which haven't been touched and city crews in Maryland, Virginia and DC and admit it might be Tuesday before they can get to the majority.

As for food? Well....most grocery stores are still kinda bare on the shelves and waiting for the delivery vehicles. They might come out tomorrow for delivery but that is questionable.

Then we have Tuesday evening where five inches of snow is predicted now. So I expect Wednesday to be another closed day for work.

I've never been in this kind of situation where snow has kept things shut down for four or five days.

Cabin fever? Yes, I am starting to feel a slight tingle with this and I'm tired of the apartment. I've watched four hours of the history channel today and a full hour of CNN news. Frankly, just standing in a barn and sniffing some fresh manure....might be a pleasurable experience at this point.