The No Prom Year

The best we can say....some 18-year old Lesbian gal from some no-name town in Mississippi...came up and wanted to take her girlfriend to the prom. The same gal also hinted she wanted to wear a tux.....not the normal evening gown that most folks would think of for a girl at a prom. Things went back and forth....and the school finally decided that they didn't need a headache.....so they dumped the prom (for everyone).

I won't repeat her name or mention the school or even the local town. None really deserve to get more mention than what's already in the news.

The thing in my mind is that she could have kept her mouth shut.....worn some weird looking grown that was half-gown and half-Tux......and just shown up with a girl-friend of hers.....and everything would have gone as planned.

The minute you get a huge significant plan up, and start advertising it.....you invite criticism. The best plan is to go with a bare minimum situation and just kinda toss rocks when you hit turbo.

The kids at the school upset over this 'gameplan'? After you read through local press there....it's safe to say at least half of the kids graduating are furious. It was a tradition and some had been planning on this evening for the past 100 days. I can understand the hostility here and the fact we are dealing with 18-year old kids.....just adds to the flame.

Do I blame the lesbian teenager? No.....she could have easily done this in California and been totally accepted. The problem is that this is rural Mississippi.....and things are accepted at the rate that some people are used to. She could have ran into the same situation in North Carolina, Kentucky, and Louisiana. There are probably twenty-five states where the plan would have been met with frustration.

So summer will come and I'm guessing this gal will pack up and leave....going to a metropolitan urban area.....where she can disappear into the thick of the gay community.....like the other rural gays who packed up and left. Remembered? Maybe for five years.....but after a while.....it's just be a short laugh.....the year of no prom with the Tux-gal. 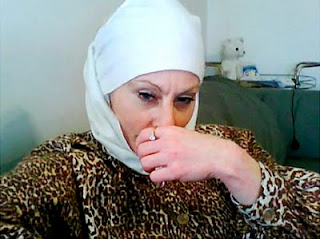 The headline around the nation today....over this "Jihad Jane" character, "Analysts Puzzled" or "Mystery Over Jihad Jane".

The episode revolves around this woman...46 year old Colleen Renee LaRose from the boonies near Philadelphia. She basically gets into this deal where she's going off to Europe to kill some Swedish cartoon guy...who drew a anti-Islam cartoon.

So it's a true-blue American born gal....who got into some radical Islamic group and was going to kill a guy in Europe.

I sat and pondered a number of things which aren't really dealt well with the media.

Colleen....for those who might be curious....dropped out of school at 16. No one talks about her grades or such....but I'm willing to wager that she was a marginal student in school and her intelligence level was that of a 12-year old kid at that point. She married at 16. Now comes this fascinating part.....she married a 31-year old guy...."Buddy" Barnum.

You can sit there and think over this....a 16-year old girl....marrying a 32-year old guy. Yeah.....there's something to this story. This was back in 1980. "Buddy" is today 62-years old and kinda hints that there wasn't much to remember of that marriage.

Colleen ended up with episodes of drunkenness and disorderly conduct while out in Texas.

When she moved to the Pennsylvania area....she ended up with some local guy. His description after she disappeared and the cops came around with the stories of her getting into radical Islam? "She's no rocket scientist". He hints very strongly that she didn't have the mental capacity to grasp alot of things.

What amazed me was that she actually had limited intelligence and was just planning this whole thing....without ever having traveled to Europe or grasping how you get from point "A" to point "B".

Finally....I looked at the picture provided by the media of Colleen. Here she is....dressed in some lusty leopard jacket.....like some trailer trash hottie....with a modest burka on. There's something wrong here. She thinks she's Muslim.....but she's not.

For these analysts who don't get it.....go and talk up any American political figure with a marginally intelligent 15-year old kid, and watch how quick you can convince them to vote for the guy.