My Day in Crystal City

Crystal City is a "burb" of Virginia....kinda in Arlington but near Alexandra at the same time.
The government sent me over there for a all-day training class. It was my first time in Crystal City....and I was kinda surprised.
It is the Rodeo Drive of DC metro-region. Every big name defense company has a office there. There are a dozen big-name hotels. And there's at least sixty restaurants along Crystal City Drive.
I came to realize something about this side of the river and the over side (DC). In DC.....except around the capital area.....you could be shot at any time of day, but especially at night. Its just not safe to walk around unless you are in a group, and after 11PM....it's just plain dangerous.
But then you come to Arlington, Alexandra, and Crystal City. Virginia cops, city cops, and private guards throughout these areas....just won't allow crime to build up. You don't have drive-by shootings in this part of the region.
It's hard to imagine an area this unsafe....and a mile away....it's ten times safer. It makes no sense.
I sat there eating an ice cream at lunch....and considering the safety issue. I didn't have a single threat within a mile of me....and it was obvious. Everyone felt the same way. Three miles over....across the river....it's an entirely different story. Something is wrong here.
at Thursday, May 06, 2010 No comments: 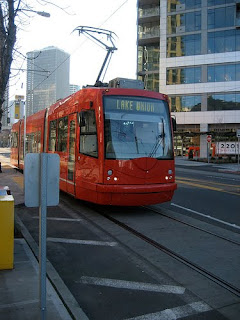 We have a billion dollar problem in DC. They've had this great streetcar idea that has been going on, and on, and on. They went out and even bought the first of the streetcars via a Czech company, and they've been sitting in storage for a minimum of twelve months.
The problem is that DC has a law on the books about no overhead electrical static lines. Sometime about a hundred years ago....they passed the law to ensure proper views around DC. So far, no political force (especially from the Democrat city council)....has found a method to counter the law.
Lots of money is tied up into development and engineering....so they can't just forget about this.
So there's thinking of a method to add a fuel type engine (maybe natural gas) and have a small portion of the DC track for the trolley car....wired for electrical, and the rest for natural gas.
The Czechs aren't saying anything.....any sale is ok with them and they would readily modify the engine for a sum of money. DC is happy to have any new train line.....and the sum of money would just have to come from the federal government....one way or another.
Meanwhile, over here in Arlington....by my Columbia Pike area.....there's another plan of sorts....with no one-hundred year old law affecting it.....to bring the trolley in.
Most Pike folks are scratching their head and wondering how the $180 million price tag will be explained. But you have to remember....lots of folks hold Pike real estate and betting on a massive change over the next decade.
at Thursday, May 06, 2010 No comments:

As of yesterday, immigration reform is now the number one agenda of the administration and thus the house and senate...at least the President says this.

Cap and trade is now practically dead...with the oil business in the Gulf. The bank revision business is going to be watered down a fair bit. And there's not much the administration can do about jobs....so this makes perfect sense.

Does it help in the November elections? Yes, in about fifteen states...it matters. This guarantees about three Democratic senators to keep their jobs...and gives away at least two Democratic senators entirely. The idea will be to get Latinos...legal and illegal...into registration offices and get them to vote. That fixes a major issue in the mind of the President.

Passage in the House and Senate? Thats a funny thing. In southern California, New Mexico, and Arizona....things are rather heated over this topic and the locals really don't want to keep the border in a open status. Any reform...will be some method of really shutting down the border...and that won't sit well with most Latinos.

I sat and pondered over this. It's a funny thing...when you say illegal immigrant...it's automatically a Latino. The vast majority of illegal immigrants in America? Latinos. Yes, there are alot of Chinese and various Arab folks...but the Latinos probably run around seventy percent or more.

The curious thing is that hundreds of thousands of various other ethnic groups are sitting in Nigeria, Thailand, and Albania....and they aren't getting their shot of being blessed as a illegal immigrant turning into a legal immigrant. Yes, this game is being rigged for Latinos only...if you stand back and look at this.

The best idea I've heard in the past six months over this entire topic...is to restart the concept of Ellis Island immigration. You enter via a port, do your papers there, and walk straight into the nation as a person on a three-year period of naturalization.

My vision? You register to immigrate in...you get a pass...then you fly into one of five different airports (and only those five). You go through a process line of folks and then you get stamped. It may take twelve hours...but it's the simple method of allowing entry like this.

If I were an Albanian sitting there for fifteen years to get into the US legally....I'd be terribly upset with the President. My relatives in the US? They ought to be terribly upset. Anybody of a minority other than Latinos...trying to play this game fairly...ought to be upset with the President's game which gives special favors only to Latinos out of this entire deal...just for a vote.

The border? Well...I'd forget about deploying thousands of military troops and just put a real authentic border fencing system. Complaints from the neighbors? Well...smile and just wave when they say anything negative. You don't have to be upset with them being angry. It's your backyard...not theirs.

So the summer promises to be long and hot....and a number of folks are going to ask stupid questions by late August over why Albanians aren't special enough to be even-par with Latinos. And frankly, the President can't answer that.
at Thursday, May 06, 2010 No comments:

Yesterday, in a interview with Iranian President Mahmoud Ahmadinejad (alias Ammi-Dang-dingo)...the question was posed. Where was Osama bin Laden? It was strongly hinted by the ABC news host that Iran was holding him. Ahmadinejad responded that bin Laden was actually hiding out in Washington, DC....across the river from me.

Rather than discount this...I sat and pondered over the idea.

First, DC would be the obvious place where a Arab-looking guy could hang out on the street corner...in Nike tennis shoes....and a National's baseball hat. He could go smoke a joint each morning with the boys....spend lunch around the Washington Monument...and then chill with a few beers in the afternoon over at Lafayette Park.

He wouldn't need a car, because he'd just have a Metro card and take the bus or subway everywhere. He could dress like an Arab some days or just dress like a local...no one would recognize him in either case.

The odds of this suggestion? I would put it at 50-50. The thing is....the US spent alot of time on foreign countries....and if you were bin Laden...you'd come to the conclusion that hiding in the backyard of the US makes perfect sense. You ditch your ID....get hooked up with some liberal arts graduate gal who works for the State Department and just play it cool in DC.

This week...in California news....the state legislative committee pushed a bill that would put a two-year moratorium on the use of metal bats in high school baseball. Purpose? A safety review.

Some folks are saying that metal alloy and aluminum bats make baseballs travel faster, thus triggering some really serious injuries. On the other side of the fence are folks who say wooden bats can be dangerous (although they are careful to hint about speed of the ball coming off the wood bat).

Opponents of the moratorium said wooden bats also are dangerous.

Yes, there have been serious traumatic brain injuries from steel bats...but you can cite a number of the same injuries from wooden bats as well.

I sat and pondered over this. I predict that President Obama will call up a commission to review this and prepare a non-partisan effort (it's always a failure but you have to say it)...to include commission members: Johnny Bench, Tony Perez, Joe Morgan, Pete Rose, and Bobby Tolan. Yes, they are all former Reds and wood enthusiasts. Yes, it's probably an arranged deal. Yes, it's probably a anti-steel bat conspiracy. And yes, the wood industry probably paid for the President in some fashion to say all of this.
at Thursday, May 06, 2010 No comments:

It won't really be printed much in Bama papers or even in national papers...but nationally known Baptist minister...George Alan Rekers...is facing a comical accusation by the media today.

Someone figured out that Doctor Rekers had hired up a male prostitute as a travel assistant while on a ten-day trip to London and Madrid last month. Naturally...this is after a stay in a hospital for a unknown ailment.

The companion? Well....the best that I can say in public is that this was a 20 year-old Puerto Rican guy who works out of Rentboy.com and his tag on the website indicates that he is "sensual", "wild", and "up for anything". He also hints of other particulars in his personality....“I’m a college guy, masculine, educated, really easy-going.” Oh, and he lists vanilla, leather, shaving and spanking as his fetishes.

I'm guessing the Baptist church where Doctor Rekers preaches....is sitting there and kinda wondering what exactly the boss was doing in Spain. A guy like this can probably outlast the opposition in the church...if he just starts preaching about "casting the first stone". But some folks might come out and just ask how "demons" got into the minister's mind, and this rock argument just won't work well.

As for other Baptist ministers contemplating a European vacation and Rentboy activities? Well....maybe they'd be better off just looking for some Thai ladyboy in Bangkok and just avoid dragging some escort around with you.
at Thursday, May 06, 2010 No comments: