Home and Your Heart

One of my first jobs when I joined the Air Force at 18...was concrete work. We did repairs to streets and roads on base. We also repaired sidewalks.

A team of three guys could go through an entire neighborhood in housing and easily tear out 200 feet of sidewalk in a week, and replace it. The cost? Well...to be honest, we never thought much about that. Our labor was free...as far as the Air Force saw it. The concrete? Maybe $700 worth of materials by the end of the week. You have to count in boards, nails, and such as part of the cost.

I sat there this morning and saw this story out of LA.

They've gotten to such a low point on money in LA....that they'd like to reduce the city's budget deficit by stopping the repair sidewalks and driveways in the city.

So they went back and researched where this all started. Strangely enough...they learned that they started along in 1974. Someone started a city ordance that made the city responsible for sidewalk repairs.

Strange thing...it started with a federal grant. I sat there and scratched my head. LA was this major city in 1974. LA had growth and capital in 1974. So they didn't even have a sidewalks program then? Yep.

So the city council is now suggesting....that money is so tight...that they won't continue this practice.

I sat and pondered over this $1.2 billion requirement. This distance...4,600 miles...would stretch from Miami to Seattle...four foot wide...and then a bit more. And it'd take $1.2 billion to replace it?

I kinda feel sorry for folks in LA. It's a miserable situation to be in...you do your best and like the local town you live in...but the sidewalks are falling apart and they really can't afford to fix them? Then you start to wonder about what else they have...which they can't fix. Maybe the sewers? Maybe your water infrastructure? Maybe the stop lights?

After a while, you pull out an Atlas and start to think about other places. Maybe you might move your finger over across the big Atlast page...all the way to Bama...and then start to scratch your head. Bama? A new home? Hmmm.
at Monday, May 10, 2010 No comments: 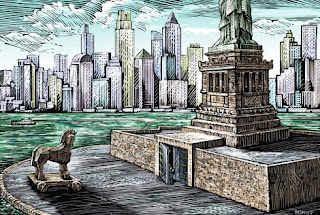 There is an outstanding article over at the Financial Times today. I won't repeat alot of the discussion, but it has to do with the spiral of Greece, and how the California looks very much like it.
The heat of this current discussion over Greece and its economic woes....centers not so much over how they got there (they kept two sets of books....and for a gov't to admit that....it's pretty bad).....but over how they recover.
It is a nation built on entitlements, millionaires who figured out how to escape taxes, and political figures who paid out voting favors with concrete, asphalt, and infrastructure.
California has done pretty much the same thing....except add in a school structure of overpaid teachers, state employees retiring easily with $80k a year in pension, and companies refusing to pay hefty taxes by relocating to nearby states.
at Monday, May 10, 2010 No comments: