Out in Central Falls, Rhode Island...about six weeks ago...the principal had come up and fired every single teacher within the school.
Eighty-seven teachers and support folks.
Today, the school hired them back for the next school year.
What's the story? Well....Central Falls High School is a failure....which they don't even argue about. It's a massive number of kids who basically give up between the ninth and twelfth grade. The tests? They were failing left and right. They were recognized within the state as the worst school and most folks were thinking they were amongst the worst in the nation.
The principal got all wrapped up in the threats by parents, the county school board, and the state board....so she asked for more after-school study hours by the teachers as part of the overall package to fix things. No, it wasn't going to be paid for. The failures were such that the school needed every single teacher to work on reestablishing kids on the right track.
The teacher's union said 'no'. No extra money....no extra hours. The come-back? Fired.
Over the past six weeks....seven hundred resumes came in. They had a chance to rebuild the teaching structure of the school from scratch.
Today....the teaching authority came out and offered all the 'fired' teachers back their contracts for 2010-2011. Yep, every single teacher of this incompetent school...is back. They did finally agree that they would donate some hours to help the 'poor kids'. So, the teachers are happy...school management is happy....and the kids are happy.
Fixed? No. There's virtually zero chance that grades will improve over the next year. The hours after school? Why would a kid even volunteer to do such a thing? Why can't the teacher teach properly over a simple school day and get the points across? You've already got kids standing there....fifteen years old....and probably an entire year behind in school. By next summer...they will likely be two years behind.
If I were a teacher with Central Falls....I'd probably sit there and wonder how exactly I screwed up and then wonder how many kids I had screwed up. Yeah....I'd be embarrassed.
Evidentially...these teachers aren't embarrassed. That says alot.
at Monday, May 17, 2010 No comments:

In the Old Days

I spent twenty-two years in the Air Force. Typically, if you said the word "exercise"....it meant filling sandbags, putting on chemical warfare gear (with the mask), and spraying soapy water over pretend-to-be chemically affected trucks. It was nasty business at times....rain, snow, and even in 110-degree temperature.
So today, I had to participate in an exercise with my military organization. I will refrain from mentioning it's name....although most of you know I'm a Pentagon guy now. Well...the main phase of this exercise....is inserting my ID card into my keyboard and identifying where I am. Yep, that was it. Just to say "here", and then go back to work.
Yeah, they did call it Exercise Eagle something....just to make it sound swell. Deep down....I kinda felt happy about this....avoiding all the normal things like shovels and sandbags.
Toward the end of my military career....I was assigned to Bitburg Air Base. About two months after I arrived....the exercise guy got all excited. The wing commander had agreed to a massive 72-hour exercise....with complete use of the shelters and we were supposed to actually camp-out in the shelters and play like chemical warfare. The cops were going to be given this attack on base and people were going to live in a co-ed environment for this 72-hour period....and just go from bunker to bunker to survive.
A week later....the exercise guy was told of the base closure announcement....and this entire 5-star exercise was cancelled. I've often wondered what would have happened with this kind of exercise, and if anything remarkable would have been learned.
at Monday, May 17, 2010 No comments:

Just to Motivate You 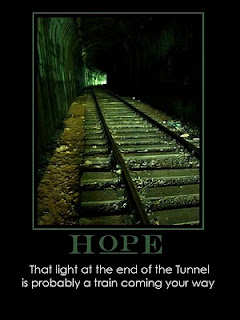 Just a motivational poster that I figured you might need.
at Monday, May 17, 2010 No comments:

Just a Bit of Poke Face

To be very honest, I hate Lady Gaga's image, but love the song "Poker Face". There are various parodies done over the song, and this is one of my favorites.