There are several news groups putting big stories over 13-year old Jordan Romero today. This is the kid who climbed Mount Everest. He has a web site and he's been talking to just about every news commenter possible to say that kids need to go out and achieve things in life. He wants himself to be the example here.
I paused looking over this kid....and I remembered this other kid....Jessica Dubroff.
This was the seven-year old kid....who was working in 1996 on being the youngest to fly across the United States.
In April of 1996....Jessica Dubroff took off and at some point in this highly advertised flight....the plane crashed....both she and the instructor onboard died.
It's a funny thing what happened over the next two weeks. Alot of people sat there and asked why did some idiot allow a seven-year old kid to attempt this feat? Why did her parents allow it?
After two weeks....virtually all of the networks collapsed on this story. The public really didn't want to hear anymore....they were pretty sick over the entire attempt and the result.
This Jordan Romero kid?
Well....by next summer....there will be some 11-year old kid who will attempt the climb on Mount Everest. Maybe he'll make it....if he's lucky.
Then some 10-year old kid will attempt it.....and maybe he'll make it.
At some point....some kid is going to die. And a bunch of folks will ask how did we get into this stupid act of kid challenge? And the answer? Well.....we made a big deal about Jordan Romero.
Just my two cents.
at Thursday, May 27, 2010 No comments:

Ok, to make this short and simple.....a Census worker came out and admitted that they'd been hired, then fired, then hired, then fired. There's a couple of other guys who've said virtually the same thing. No one is quiet sure to make out of this....except they think we aren't talking about dozens....but thousands.
So imagine this scenario. You have a group of forty Census folks. On Monday, you hire them and inprocess them (an hour of paperwork). After two weeks....on Friday....you let them go (outprocess them). Then the following Monday, you rehire them. Over and over. For two months.
Your hiring numbers? Well....you hired 160 new folks....at least you report that to the government office that does statistics. But the truth is that you really only hired forty.
Imagine now....that a hundred offices do the same trick.....so you have 16,000 new hires over two months. But the truth is.....you really only hired 4,000 folks.
Then you go National. We won't even discuss the numbers anymore.
Man, your employment numbers for April, May, June, and July look damn good. But it's just not true.
I sat and pondered over this. Why limit this to the Census folks? Why not use the post office, firemen, and cops in the same game?
We could hire forty million government employees each month.....and keep repeating this every single month. By the end of the year, we'd be the greatest hiring nation on the face of the Earth.
The only problem? We'd still have fifteen percent unemployment, and folks scratching their heads over why the numbers look so good.....but why is everyone unemployed?
This is kinda like wiping your butt with only one sheet of toilet paper and refolding each time to do the second, third, and fourth wipe. At some point, something makes no sense in this process other than telling your wife that you accomplished something unique today and her asking what that funny smell is.
at Thursday, May 27, 2010 No comments:

"We are in charge, but BP is responsible."

It's a White House quote today....and we aren't quiet sure who really said it. It's supposed to reassure folks, but I'm guessing that lasts about three minutes before you open a beer and try to forget the quote.

BP hass likely got every single lobbyist in a corner and trying to get the payoffs here lined up. It's a campaign year....so if you enough folks...then they just don't say much.

Who's actually in charge? I wouldn't worry about it. If anyone were in charge...they'd actually be in Louisiana and doing things daily related to the mess. That's not happening...so we are pretty much running on automatic.
at Thursday, May 27, 2010 No comments:

Sometimes....VP Joe Biden will say something stupid and something brilliant at the same time. This is a plus-minus thing....which you have to appreciate.

Yesterday...Joe came out to mingle at a bar-b-q at Walter Reed Hospital with wounded GI's. Personally....if you offered a free beer and a plate of ribs...I doubt the guy would ever turn down the deal.

So some GI brought up the Connecticut problem with the wannabe Vietnam vet Blumenthal....who is running for senator there.

Joe quickly spoke up: "I didn't serve in Vietnam. I don't want to make a Blumenthal mistake here. Our attorney general from Connecticut, God love him." Later...Joe wanted to add a cherry on his previous comment....and said...."I have a bad habit of saying exactly what I think."

I'm thinking Joe had a good afternoon....a couple of beers....shook some hands....and probably met a couple hundred folks.
at Thursday, May 27, 2010 No comments:

A moment of oil discussion. If you kinda notice the Gulf of Mexico problem....the odds now of drilling being prevented or downsized in the Gulf? Better than fifty percent. Comments yesterday that Arctic drilling will be hindered or stopped by the administration? Yeah....it's pretty much a guaranteed thing now.
Wanna take a guess on gas prices by October? Start betting on fifty cents more....as a minimum. By November 2012's election....I would imagine we are discussing a $1 over what you pay today for each gallon.
at Thursday, May 27, 2010 No comments:

Empty Fifty Pound Bag of Nothing 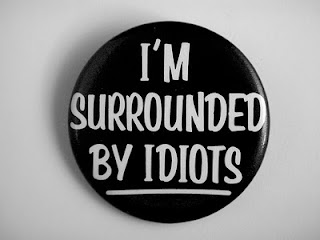 Well...I guess I spoke too soon.

Today...the State Department stood up and said the vast 1,200 National Guard troops ordered deployed to the border of the US...have nothing to do with enforcing the protection of the border or preventing illegal aliens from crossing.

Apparently, their sole purpose is to stop guns from going to Mexico and drugs coming to the US....and thats all.

How will they be able to identify people crossing the border are drug carriers and not just illegals crossing? Hmmm....that would be a curious question, but obviously it won't be answered by anyone in the administration.
How does the border patrol prioritize their business now? Drug carriers ahead of gun dealers ahead of illegals crossing? How do the National Guard guys relate to this whole mess?
Its best not to ask.
at Thursday, May 27, 2010 No comments: