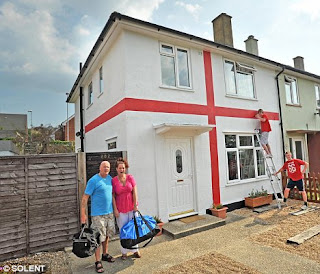 In Europe, when parents leave their teenage kids home and go on vacation, there's trouble when the parents return home. Usually damage or wild parties. But when Andy and Sara Munro came home....they found their sons had repainted the family home in the colors of the St Georges Cross. So far, they haven't said anything negative...and might let it linger a while...till after the Soccer Cup finals are done.
at Sunday, June 06, 2010 No comments:

There is a fourth verse of the Star Spangled Banner...of which we traditionally only use the second verse for national purposes.

This came to be noticed on Friday...when this guy came out in Georgia...at a Tea Party event...and did his rendition of the fourth verse.

You have to admit...it's worth listening to.

What May Come Next

In the midst of the paper that the FTC wrote to "save" journalism...is a small suggestion that most folks missed.

The suggestion? They came out to suggest that the US should allow Voice of America and Radio Free Europe/Radio Liberty to be rebroadcast within the US.

For those who've never followed VOA or RFE or Radio Liberty...it's illegal (actual laws) to run any of them toward the US public. The reason? They exist to propagandize the American way of life, American politics, and American economic ideals.

Yes, if you can imagine the danger in this...a device we use to pass US propaganda around the globe....and we actually viewed this as a threat on our own soil. This should indicate to you how politicians view any of the three "networks".

In the 1980s....I bought a short-wave radio while stationed in Europe. It was interesting listening to the BBC worldwide service, the French national news in English, and even Radio Moscow. Each carried their slant, and I quickly came to realize how interviews were arranged on Soviet radio to ensure you got the right angle of things. The fact that only good news could come out of the Soviet Union and somewhat negative news from America....was a great lesson in life.

At some point, I started to listen to the English version of Voice of America and Radio Free Europe. It reminded me of NPR in a way. They played jazz along with Johnny Cash. They covered US news always in a popular light and gave a fair amount of inspiration on economic values. Strangely enough....after about six hours of listening to them...I kinda got tired of the propaganda and turned them off.

When the FTC writes this kind of suggestion down...they are hoping that it can be sold to congress. Congress would have to devise a large bucket of tax revenue to run such a device across the nation. The FTC is suggesting a special tax on commercially run TV and radio operations....to pay for "propaganda America".

Who would listen to this? I sat and pondered over this. Out of 300 million Americans.....I would imagine that around 100,000 Americans would listen to it around twenty hours a week....at best.

C-Span already covers a large portion of what they might to cover. MSNBC, CNN & Fox News covers the other portion.

Would Voice of America managers get worried when barely 100,000 listen to their stories? Would they demand some other methods be enforced to bring a bigger audience to Voice of America? This is the curious thing.

Frankly, the idea of a government sponsored propaganda vehicle....working within the US....is a joke. We might as well start the idea of Radio Free Mexico also being offered here....along with Radio Moscow....Radio Nigeria...and even Radio Tonga. We need state-sponsored propaganda...to compete against CNN and Fox News....it only makes sense. In a mad world, of course.
at Sunday, June 06, 2010 No comments:

A Micky to Remember

There's this primary race underway in California....between Democratic Senator Barbara Boxer and Democratic nobody Mickey Kaus. Micky's pretty sure that he can't beat Boxer, but he's entertaining the voters anyway.

This week....Micky came out and said he'd drop out of the race...IF the White House would offer him a job:

(1) Head of the Immigration and Customs Enforcement. Micky admits that he wants an actual real fence on the border. I'm thinking that this would be a difficult thing to offer Micky because the President really doesn't want a fence.

(2) A membership on the National Labor Relations Board. Micky says he'd stop "big labor" from avoiding secret ballots in union organizational pushes. This is something that would make the President very unhappy about.

(3) A position within the Department of Education... solely to write "a scathing report" on California teachers' unions. This would make the President very unhappy.

So I'm thinking between now and Tuesday....there's zero chance of some idiot...even Bill Clinton....coming out to offer Micky a job. However, the Republicans should remember this guy and help him out later.
at Sunday, June 06, 2010 No comments: 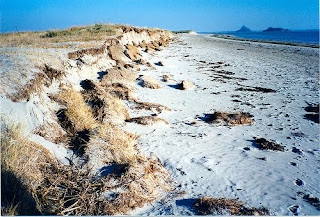 The 6th of June is a day that I always kinda circle and remember in some fashion.
Last year....I wrote what I considered my best blog ever....over the events of the 6th of June: Waiting.
I always remember the day in the historical view of things. You can't change history. You can't really forget the day. You can't draw comparison to anything in relationship to the day. It is....what it is.
The Normandy beach is a kind of sacred land. A thousand years may pass....and it'll still be sacred.
at Sunday, June 06, 2010 No comments: