It's probably not mentioned much....unlike the Toyota recall...but today...big boy General Motors asked for 1.5 million vehicles to be recalled.

There's around $150 million involved in this episode...if you were curious.

The deal? Well...some guy thought it would be swell...if the wiper fluid "dispenser" device, squirted heated cleaning fluid on the windshield.

When I read this...I sat there for two minutes....thinking...why the hell would anyone want hot wishy-washy fluid on a windshield? The only idea I could see is that in December or January...in New Jersey or Montana....it might be handy...but it's an extra piece to eventually break.

Well...in this case....it was a piece that could trigger a fire apparently.

The curious part to this story...is that GM actually wanted to repair or fix the issue...but the one company that made the item...went bankrupt. So they couldn't move on with a new & improved heater-fluid dispenser. The funny thing is that they aren't doing anything other than disconnecting the heater, and then paying you the owner a $100 check.
at Wednesday, June 09, 2010 No comments:

The Way They Vote 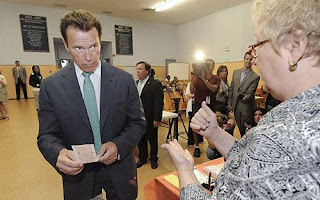 So as the California primary occurred today, Governor Schwarzenegger came out to vote.

Apparently, they ran the ballot through the machine...and it came back "null"...and they checked. It was rejected. He'd actually voted for two candidates for Republican senator.

The poll lady was nice about this....and asked the governor to fill out another form. I'm guessing she explained...only one vote per line...and Arnold eventually caught onto this idea. He probably came out of the building shocked...one vote...one candidate? A new prospective on democracy in America perhaps.
at Wednesday, June 09, 2010 No comments:

What is Beck Accomplishing

Since January.....I've probably sat through over forty hours of Glenn Beck.....ten minutes here....thirty minutes there. I always sit through 'history-Friday'....because it is actually interesting to catch real chat and discussion over the 1700s period.
So what is Beck accomplishing? Should the White House and Democrats be worried? Fear anyone?
Here's the deal....he's citing books and getting people to buy dull and boring history books via Amazon and other major dealers. The viewers are reading and absorbing things that high school teachers skipped, and most college professors just barely mentioned.
These people aren't getting just a lecture......they are getting the footnotes, and then going back to dig into the real topic of discussion.
Ever wondered why the British feared Ben Franklin or Thomas Jefferson? You might be wondering about things like this.
They are preparing themselves for 'mortal-combat'....using their mind. Imagine a million folks just off the street.....who actually are capable of arguing with Today's Matt Lauer and having no fear of taking him on with discussions over the Constitution, economics, or politics.
Imagine these million folks moving out across neighborhoods, and asking stupid questions of their relatives and neighbors....then carving out answers, then citing Jefferson quotes, or the wisdom of Calvin Coolidge.
Quietly, there's this potential for people to stand up and actually argue points....and they might convince another million....or two million....or three million folks to think about things.
So Beck's logic in the long run? He just might swing a couple of million votes just by making folks smarter. And no one in the media could have ever imagined such a trick.
at Wednesday, June 09, 2010 No comments: