Proposition 14 passed in California during this primary vote of last week.

What the media kept saying is that it would create this fantastic new concept...Democrat versus Democrat, Republican versus Republican, or independent versus anybody.

I looked at this for sixty seconds...and started laughing. It really means that it's up to the parties to round up votes...any vote....from Latinos to prison folks, from folks from Texas just visiting....to folks registered in five counties in California. The party with the most votes....wins. It's stupid and crazy....but it's what they asked for....or did they?

This campaign was pushed by Schwarzenegger. I'm guessing he thought this would improve things in the state. My guess is that the Republicans in the state are finished as a party.
at Thursday, June 10, 2010 No comments: 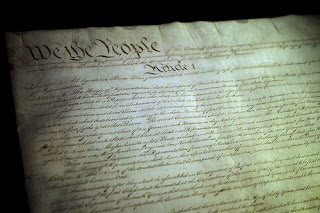 “This book is a product of its time and does not reflect the same values as it would if it were written today.”
It's a curious quote and writing on the cover page of a book written by a small publishing company. They only sell copies of the US Constitution. You can see where this is going.
Wilder Publications is the name of the company.
It's a disclaimer.
What they are suggesting....is that if you wrote something or had an idea about something from one hundred years ago....doesn't matter over what....then it just might offend folks.
Then they kinda suggest that kids ought to discuss the subject matter with their parents....like the Constitution.
I can imagine Johnny Junior standing there....asking Dad about the Constitution while Dad is sipping his cold beer on the porch. Dad's tired and just barely listening to the topic of conversation. Dad thinks for a minute and then proudly pulls out his 1972 copy of the Constitution, and says he doesn't have a disclaimer with his copy....then proudly and with a tear in his eye....offers it to Johnny Junior.
The kid shares this special moment....gets all broke up....hugs dad....and reads Dad's copy.
Then Johnny Junior throws out all his Hustler collection, Dancing with the Stars videos, pictures of Dixie Chicks, and Obama "change" posters....and registers as a Republican the next day.
Yeah....that's how I see this in the end.
Hmmmm....now if they could put the same disclaimer on the Bible....and suggest that it's values don't work today. That would make things interesting.
at Thursday, June 10, 2010 No comments:

This is an example of how politics really works.

In South Carolina...they had a primary. The Democrats ran two candidates: (1) a guy who was known around the state and had $180k to spend on the election, and (2) a guy who less than $5k, black, a virtual unknown, and never campaigned or made a single speech. Normally, you could easily predict the winner...except in South Carolina.

The winner in the primary? The unknown guy.

Adding to this amusing episode....the unknown Democrat actually was a former US Army guy...who'd been kinda kicked out....on accusations & an arrest for showing obscene photos of himself to a college student (we aren't sure if the student was male or female).

This is so amusing....that South Carolina Democratic Party Chair Carol Fowler got upset after the win...and asked Alvin Greene to just quit. In Carol's mind...this just wasn't right that the unknown and convicted guy...was the winner. But Alvin says "no". He just won't quit. He won with 60 percent and is the people's candidate. Alvin also says (a great Karl Rove-type quote: "We need to be about the issues. We need to be pro-South Carolina, not anti-Greene."

"Real" Democrats around the state are kinda shocked at how things went and can't explain how unauthorized ad's for Alvin occurred (he didn't pay for them)....and how the public support swarmed around the guy.

Some things to add up on this? A guy who never ran for any office before...wins a state-level primary election. The guy runs the whole race with no staffers. As far as anyone can tell...he ran the entire campaign by himself.

The $10k he needed for registering? Well...he was broke to start with...so it's kinda a mystery where that money came from (maybe some fellow Democrats loaned it to him).

What could happen now? The state Democratic party could discard the guy by some special internal voting apparatus (it does exist for cases like this), and pretend he doesn't exist. Alvin could then develop his own political party (the "Party of One") and probably get more invisible money and his personal campaign staff (himself only) to take on the established Democratic party in the state.

My guess is that Alvin (who is black) and this Democratic party guy (white) would then divide the state's Democratic votes. Demint would easily win in such a scenario and the Democratic white guy would barely get maybe twenty percent of the vote at best. Alvin would collect fifteen to twenty percent...thus making the race more of a comical affair.

Yep, only a Republican could have come up with a scenario like this. Like Karl Rove for example.

What happens to Alvin in the end? I'm pretty sure they will keep Alvin around....and in two years...run him for congress. The "Party of One" concept might actually catch on...if folks don't grasp what it really means.
Karl Rove at work? Hmmm....well....Karl would never stoop to such levels....in my humble opinion. He'd actually stoop alot lower than this.
at Thursday, June 10, 2010 No comments: