The Kid and the Sailboat

Last week....this sixteen year old gal with the sailboat was the big story of the week. This kid (Abby Sunderland) became this lost teenage girl in the Indian Ocean....and a huge amount of effort was put into this search and rescue.

Eventually they found her, and folks began to ask stupid questions....like why a father would allow a kid to do something like this?

Well...today....the NY Post came out and said that her father is flat broke, and had engineered a reality show contract...."Adventures in Sunderland."

The father, Laurence Sunderland, is apparently a sailing instructor out in LA (California)....and pretty much waiting for this massive pay-off deal.

I sat and watched Fox News last night...and they kept looking at the timing of this event....when storms typically flair up in the Indian Ocean and South Pacific....and this was really the wrong time to engineer such a cruise. However, if they waited...she would turn 17 and thus make this a worthless effort.

I have a pretty disgusting view of this matter, if this is all true. You sit there and pep up some naive sixteen year old daughter...to bring a fortune upon the family's door step...and risk her life for the money? It doesn't make any sense.

If I was the daughter...and came back to figure this all out...I might just stop at the front door...and just walk away. You can't trust a father who puts you into harm's way...for money. It's that simple.
at Monday, June 14, 2010 1 comment: 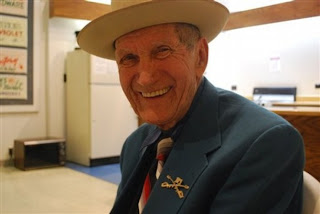 My brother will occasionally point out five-star news items from the local papers. These are typically not items carried in national newspapers or with the big-boy networks.

So there's this story from this week.
We have a local guy from just across the state line (in Tennessee)....who is mostly known for nothing much in the local area. He's 91 years old. If you asked anybody who knows him....he's just a friendly guy from the area....worked hard his entire life.....and a WW II vet.
There is another story about Bob Hamsley.....but it's 66 years ago.
You see Bob arrived on the shores of France....to combat the Nazis. Bob's a guy with a homegrown attitude....of doing what you can for folks.....and fixing wrongs.

On the sixth of August....1944....Bob came to arrive in Plelo, France. It's best to say anybody from Plelo....was living on borrowed time. Their names were written down to be terminated. It's the kind of situation that most of us today cannot imagine.
Bob was an officer in the Third Army....and controlled five armed tanks. He was supposed to save bridges and help the US forces advance.
When Bob arrived in Plelo....the Nazis had everyone kinda lined up and were in some preparation for an execution. In simple terms....machine guns were lined up and prepared to kill a mass group of people.
Bob rolled his tanks into the town and made probably enough noise to make the Nazis think dozens of American tanks were about to arrive. The Nazis retreated and left the town.
So, folks around Plelo were kinda in shock and awe at the mighty Americans and their "vast" fighting force. People lived....only because Bob and his crew weren't hesitant to face down any threat.
Here's the odd thing....they remembered Bob. They remembered his entire tank team. They went out and erected a statue of Bob. Then they named a couple of streets after Bob and the crew. Then they even named a athletic stadium after him.
Several decades passed between Bob's visit in 1944 and when he finally went back. It would appear that Bob never knew about alot of this 'attention' and name usage. He's been a couple of times over the past fifteen years and enjoys the attention now.
If you walked around Bob's neck of the woods....he kinda kept quiet and didn't make a big deal about his actions. I think he saw it as simply something that he was going to do that day, and little else.....a piece of destiny perhaps.
Other than an article and a couple of days in France to sip wine and enjoy the French countryside....that's about all that Bob's getting out of this deal. And you know....I think he's mostly happy and satisfied about this moment. It's his little piece of a big deal.
at Monday, June 14, 2010 No comments:

The Sun Setting on Larry King

It was not truly a shocker...at least to me.

Today, CNN announced that Piers Morgan is set to replace Larry King in the fall. You probably know Piers....from the UK. He's the Britain's Got Talent judge and spent a number of years as a newspaper editor.

Larry? Well....Over the past three years...his rating have been falling and CNN is getting to a point of redesigning their entire evening lineup. I suspect Larry knew about this approaching replacement deal back in February and probably wasn't going to get excited about it.

The question here...does CNN recover from the Fox News supremacy now? Can Piers do something that brings viewers back?

What happens with Larry? I'm guessing two or three books over the next three years...and that's about it.

For those who don't remember how it was on CNN before Larry...I do. CNN had a four-star gal who carried top notch interviews....and simply decided that she'd had enough. So they hired Larry...and simply hoped that his format would eventually catch on. The first year was not that great (not marginal, but not matching the previous host)....and then eventually...folks accepted Larry. It is an end to a era.
at Monday, June 14, 2010 No comments:

The Brits Have It

I read a fair amount of British newspapers...and a story popped out this morning. Over in the British Isles....there's this new trend.

It's a booklet thats given out as part of the national health program (figure around $16 that it would cost....if you had to actually pay for it)....detailing senior citizen benefits of sexual activity and how to go out and get some.
Naturally, it covers Viagra....which the health system will cover free of charge...and the need for safe sex.
And yes, it does cover the various acts that some folks may have forgotten about or missed during their earlier years. "Explicit" would probably be the word used by most folks who come upon the booklet.
Don't worry....our program will end up with booklets like this after 2013 as well....if you were wondering.
at Monday, June 14, 2010 No comments:

There's an interesting story over at the NY Times. Basically....lots of people have health issues today, and they are prescribed various drugs to save them. The basic problem is that folks are forgetful and simply skip taking their drug on schedule.
So some smart guys sat down and decided to create a method that works....but probably is unethical.
The heart of this new method? Financial incentives. The name of the game? Well in Philadelphia....it's called lotto. You can win $10 or $100 each day they take a certain prescribed drug. The company behind the drug....fronts the money from profits. How to make this work? Well....they use a computerized pillbox to record if they took the medicine and whether they won that day.

It would appear that the game is rigged so everyone wins something.....and the average might be around $300 every six months.
My view over games like this? It is unethical....paying people to take their drugs on time.
Will it spread? Yeah....I'm willing to bet within five years that it'll be in most states and pharmacy operations will even make it more interesting with $1000 per win.....maybe even a car once a year for some lucky "player".
at Monday, June 14, 2010 No comments:

Richer Than Rich But Cursed 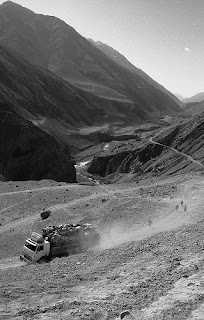 For most folks, it's big news. For Aghans.....it's five-star once-in-a-lifetime news. There's a minimum of $1 trillion in mineral deposits sitting there in Afghanistan.
Iron, copper, cobalt, gold, niobium and lithium (the stuff they use for batteries).
The Pentagon, along with some really smart folks....have spent four years analyzing data and going over the whole country. They indicate these assets are spread over the whole country.
So what happens now? I'm guessing thirty different international mining companies are likely sending guys in to discuss matters. But you need one key element in this deal.....a safe atmosphere from which to work. The Taliban has to be pushed out and the country made safe.
Corruption from this mineral situation? Yeah....you can count on this....with warlords and local governors deeply involved in this mess.
What happens in twenty years? It will eventually turn safe enough to mine. The money will flow into the country.....and I think it'll turn into another Nigeria....where citizens rarely see any changes other than better roads and airports. This is the sad part about the discovery....it ought to bring the country together and stabilize things for the next two centuries.....but it won't.
at Monday, June 14, 2010 No comments:

Email ThisBlogThis!Share to TwitterShare to FacebookShare to Pinterest
Labels: afghanistan

The Problem with Insomnia

There's an interesting comment about a medical research project over at the British Independent today.
The discovery? Insomnia creates more potential for paranoid thinking.
I wasn't really surprised by this report.
The doctor in charge of this effort.....Dr Daniel Freeman.....surveyed over 8,000 people and reached this conclusion. Basically....if you sleep well....you don't think that people are deliberately trying to harm you. If you have insomnia....you might have serious issues.
So, now you start to look around your inner circle and worry about those folks who complain about bad sleep or no sleep.
We used to be a simple society. You got up....did a full days work....came home.....and slept. Your stress level stayed about the same. You didn't have paranoid issues flair up. Today? Well....we are noticing these little things more and more.
at Monday, June 14, 2010 No comments:

Today....we had a South Carolina politician who came out to suggest that the Democratic winner of Senate primary...Alvin Greene....may be intellectually incapable of participating in the general election race.

I read through some of the pieces written on the story. State Representative Todd Rutherford decided that he had to go out and personally interview Alvin....just to make things right. This discussion led onto a long indepth conversation. By the end....Todd came to say that Alvin wasn't "bright".

Then Todd rattled off this comment...."About two questions into a conversation with him, it would become apparent that he is not probably fit to answer the questions befitting a Senate candidate."

To be kinda honest here....there are forty Senators sitting in Washington now....who are not capable of answering questions. I'll even be more honest...it's pretty much split up the middle...between both Democrats and Republicans.

Noted any great speeches by West Virginia's Robert Byrd over the past five years? Or even the last decade?

How about a competent speech by New Jersey's Frank Lautenberg?

How about believability in anything that Lindsey Graham of South Carolina says? After about three interviews....you question just about everything this guy says.

I think Alvin might do just fine....considering that alot of fine gentlemen in DC are crazy, incompetent, or just insane.
at Monday, June 14, 2010 No comments: