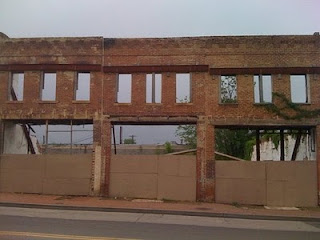 My organization had a bar-b-q today....which naturally, can't occur at the Pentagon (fire rules, you know).
So this was to be held over at Bolling AFB....which is just across the river from the Pentagon. It's in DC....but it's an area of DC that you probably don't really want to travel through.
Adding to this episode....remember....I don't have a car and I do all my travel via METRO. So I made this decision to travel from the Pentagon....via METRO....to Bolling. It's simple....go via the subway to the middle of DC, then take the green line over to Anacostia. Then, there's this bus from there to the front gate.
Well.....things came unhinged at the Anacostia Metro station. I stepped out with my co-worker (a black New York City gal)....and realized that this is a part of DC that you don't normally go to. I was the only white guy amongst the 300 folks that I could see. We quickly made our way to the W4 bus and thought we'd be near the front gate in ten minutes. We were wrong.
About sixteen minutes into this trip....I realized we missed the gate. To be honest...there are no signs on this street at all.
So we got off and got on a return bus....and began asking about where to get off. The passenger I asked....had this blank look. She was a local and lived in the neighborhood her entire life....yet knew nothing about the base. My co-worker talked to the bus driver.....and he gave us this blank look. Both appeared to be weed-smokers...just my humble opinion.
So we went back to the METRO station and met some more interesting characters....and spent forty-five minutes waiting for a return chance.
It was at this point that I had this image burned into my mind of Anacostia. I could not imagine myself standing there at sundown. This wasn't a crack haven or some drive-by shooters hangout in Memphis. It's just an area where a guy like me simply didn't fit. I felt fortunate to be standing there with my black female co-worker....and I can only imagine what the local folks had in their mind of my appearance.
Then....by the some form of luck....a military shuttle bus pulls up. We realized the potential and quickly got onboard. Twenty minutes later....we entered Bolling.
If you've never been to Bolling AFB in your life....it is a rare and unique place. It's barely half-a-mile wide and at the end....there's a park facing the bay....which faces out to the Pentagon, Ronald Reagan Airport, the Capital and Arlington. It's the best view of any place in the region.
The funny thing is that you've got this really screwed-up location of Anacostia sitting there....and five hundred feet over....is this five-star landscaped Air Force Base.
At the end of the day....luckily....another associate from the office was driving home and dropped me off....so I missed the chance to see Anacostia again.
at Friday, July 30, 2010 No comments: