There's an interesting site that I would recommend to read. Sarcastically done of course, there's this suggestion of taking our world famous "cash-for-clunkers" program and and use the concept for a "dollars-for-dumps" program.
To start with...folks in the past couple of months have become shocked over the current pricing scheme for used cars of the $1000 to $3000 value area. You used to be able to find a car lot in every town where...if you only had $1,200....you could go and actually buy yourself a car. Lots of folks needed that type of situation.
So today...with so many clunkers gone from the market....you can't find any $1,200 cars. In fact, you are beginning to see a very small market in existence.....and you have to start thinking about $4k cars instead.
Being from Bama, I can appreciate this type of sales situation. We are rich in small town carlots where you'd find a 10-year old car for $5k and it'd fit your pocket situation.
So our cash-for-clunkers program destroyed the market for $1k cars, and pretty much makes you have to find $3k to get a slightly better car.
This 'dollars-for-dumps' idea works in the same fashion. You get the President to come up with a trillion dollars....probably just sitting around anyway....and start buying cheap houses all over the country (especially in California)....and then you tear down the property.
We could even hire local unemployed folks to help tear down the homes.
So months would pass, and then you'd wake up one day to realize that home prices were rising five percent a year. And suddenly you couldn't find a $200k house anymore....you'd have to come up with $300k instead.
Then America would be saved from this terrible housing market crash that we are suffering through currently.
Yes, I realize that we'd have to send the President back to Norway for another Nobel Prize because this makes perfect economic sense to those guys......but we'd actually destroy enough houses to change the whole market.
Neat, huh?
I think these guys have a pretty good idea.
I was thinking along these same lines for the beef industry as well...."cash-for-beef"....and just have the government buy up 2 million head of cattle and just bury them in some nuclear site out west...and drive beef prices up to $40 a pound. Or this other idea of mine...."cash-for-beer"....and just have the government buy up all the beer distribution points in America....and drive beer up to $8 a bottle.
at Sunday, August 29, 2010 No comments:

A Day in DC

I spent the morning at the Tea Party event...the Beck rally....at the Lincoln Memorial.

The METRO was a mess...already by 7:30. I entered at the Pentagon and there were over 250 folks in each car....way more than rush-hour. Most of us got off at the Cemetery and walked across the bridge. 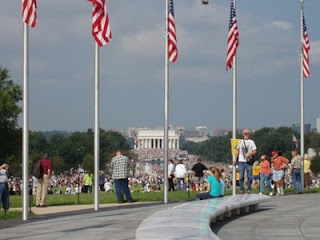 Booze? None...not a single drop around. 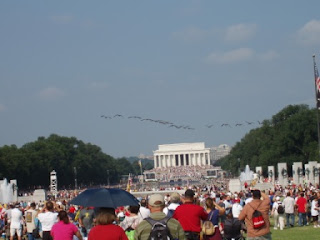 1. About half the folks were over 45 years old.

3. Everyone was extremely orderly.

4. Lots of cops around...as if they were expecting trouble...but they mostly just there watching.

5. I talked to a guy who'd taken the 4AM train from NY City down...from Brooklyn. By himself...he just wanted the experience.

6. Talked to another group....drove two days from Oklahoma and were parking at the Arlington Cemetery. The next car over from them...had Alaska plates. 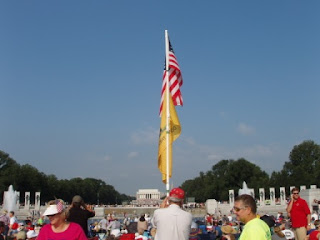 7. When leaving toward the Washington monument around 1140, I could still see at least 15,000 more folks walking in from the nearby METEO station. They were late but they were still coming in. 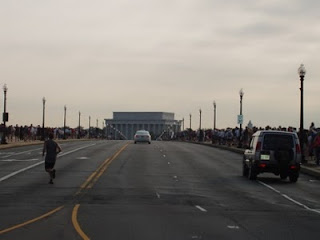 9. All of these folks were charged up and will be for weeks and months. They will likely pester their relatives, neighbors and friends....and this event likely translates into another three million votes in November...just my humble opinion.

10. Finally, it was amazing to note that the place wasn't being trashed. Everyone was putting garbage in the right places. Lots of rallys come and go....with a huge amount of trash left when they leave...but I walked a full circle and noted folks were trying hard to keep the place clean.

It was an unusual experience. I'm not into the Tea Party...although I believe they might have a huge impact on the November election. Anger? No...I didn't see any today...just alot of enthusiasm for something different.
at Sunday, August 29, 2010 No comments: