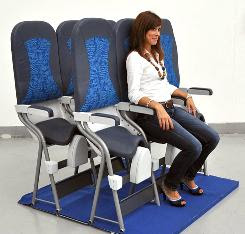 I tried to imagine this seat in an airplane. It's a new seat...which a company wants to sell to various international and US airlines. They describe it as basically like a saddle deal...if you were riding a horse.

To some degree...you'd sit at an angle. And your legs would point downward. Naturally....there'd be less leg room to some degree, and more seats....so you could sell more at a cheaper rate.

I'm waiting for the airline that just hands you a soda and you stand as you take off....and just try to get by for an hour in this standing position. Sooner or later....it'll come.
As for this seat? I'm wondering what engineer came up with the saddle look, and what university they went to. I've got a funny feeling that you start to feel funny in this position after 15 minutes, and you have to stand for most of the trip.
at Saturday, September 11, 2010 No comments:

Nothing to Fool Around With

The smoke has cleared out in San Bruno, California....after a massive gas explosion. The best that folks can say...is that for weeks...they smelled gas, and they tried to report it. Then on Thursday morning...it just plain exploded, in a massive fireball.

When I was stationed in Louisiana, I lived in the barracks. One day, I returned from work...changed clothing, and went off to classes. I was gone for six hours (I went and ate dinner after classes). When I finally got back to the barracks...it was pitch dark...which I thought was strange.

I tried to enter. The door at the end of the building was locked (it never is locked).

So I went up the fire escape. Second floor door was locked. Then some guy yelled from the ground..."come back down".

He proceed to explain to me that a gas leak has occurred around 5PM, and some guy had walked into his room....showered, and then tried to dry his hair as he was lighting a cigarette. This flash fire occurred and luckily...the guy was only fairly burned. They rushed folks out, and then civil engineering determined the building was unsafe...and gave everyone fifteen minutes to grab some clothing and leave the building.

I asked this guy telling me the story if I could enter....and he pulled out a key. I had ten minutes to pack up one bag and get out.

The amusing thing was lack of power and lights in the building. I used his flashlight and grabbed enough clothing to get by for three days.

I ended up in the base officer's quarters (a fairly nice place), and stayed there almost five nights.

When they finally allowed us to return...it was obvious that they'd dug a fair bit around the building and replaced every single pipe within 100 feet of the barracks. We were told to open our windows for 24 hours (in mid July)....and just let it air out.

The plain truth about natural gas...is that there is an element of danger. I've seen pictures in Germany of houses blown up because of gas leaks. It's not exactly 100 percent safe. All you need is one small leak...and a lack of attention for several days...and you've got the potential for a massive explosion.
at Saturday, September 11, 2010 No comments: 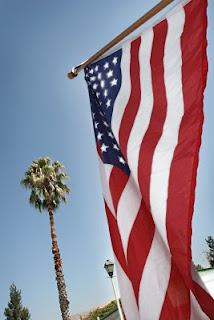 It's been nine years. It was late in the afternoon in Germany when I was told events were unfolding in New York City and the Pentagon. We asked if extended hours were needed and no one was sure of nothing at that point. I left and went home....and proceeded to watch four hours of CNN coverage over the event.

For me, the ability to time four hijackings was fairly amazing. You basically had to get four groups of terrorists past some basic security and all had to successfully do their job. In the end....three were successful, and the fourth crashed way short of their target.

I waited for a phonecall to say what the deal was for the next day, and nothing came. So at 7AM, I drove in. The line started about three miles from the base. It was almost 10AM before I finally got to the gate. Every single car was being searched before being allowed on base.

When I finally got to the office, there were three guys there. The boss had deemed them essential and everyone else was supposed to stay home. Apparently, I never got this message. So I drove home and waited. The next day was the same. The third day was the same.

When we finally were allowed back on base....it took almost three hours to get onto base. The next day, I left at 6AM and it took two hours.

The atmosphere over the next month was something you'd never seen practiced in exercises. Various parking lots were closed off. What did remain was filled by 7AM. You would have to park almost a mile from your office, and then never move the entire day.

So we stayed at this heightened sense of alert for weeks and weeks. I sat one day and asked one of the plans officers how anyone could justify the highest alert for a unlimited time. He kinda admitted that you weren't supposed to stay on maximum alert for more than 72 hours (it was even written down). It was well established that your entire mission and capability were degraded (in some cases, by fifty percent). But his summary was that no one wanted to sign off on going down one simple step...not any general from Stuttgart, or from Ramstein.

So when we did finally go down one step in security....you barely saw more than ten things dissolve on base. A great deal of the security remained in place. I would have to admit that for an entire year....this massive security apparatus remained in bulk form.

Since 9-11, billions have been spent on increased security. The whole Homeland Security structure came out of the event. The TSA mess at airports came out of this. Approximately twenty-five percent of your airline prices today....came from this. There are fantastic sums of money spent....to preserve the peace....because the threat still remains. And we will spend hundreds of billions more over the next two decades...to stay "safe".

In two decades, there will still be a few of us who remember arriving at the airport an hour before the flight....walking through without any real security....and entering our plane.

So it's an odd day for me. There's not much to really say since the day. Brave people died unnecessarily. Every threat still remains. A bunch of folks had to die for some idiot's fantasy world. Money is flushed down a radical Islamic toilet to protect us. Politicians want to show up at memorials every 9-11. And we wonder if life will ever go back to normal.
at Saturday, September 11, 2010 No comments: