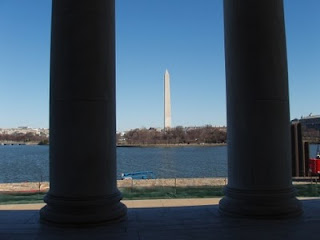 When I arrived in DC back in January, I finally made my first trip out to the National Mall area....to see the Washington Monument. It's an odd layout. Here is the monument, in the midst of fifty acres....with nothing else around it.
Fifty acres of nothing....just grass.
For me, it was an odd situation. I thought there would be some fountains or gardens spread around it. Maybe a couple of statues. Perhaps something from period of the 1800s. But there was nothing.
Yesterday, I came to read my Sunday copy of the Washington Post and here was an article of interest. There's a group who believes the Washington Monument, with its fifty acres of open space....needs fixing.
They've got a web site, wamocompetition.org.
What they are aiming at...is a national poll of ideas to fill up the fifty acres. No, they don't want any crazy ideas. They actually want this area of 28 football fields to be something of significance. So you can suggest some ideas and don't have to be that fancy in your concept.
I thought about this for a while. I'd personally like some water fountains and something from each of the men who signed the Declaration of Independence. I'd like to throw in some trees where you could sit in the shade and actually admire the Monument.
So if you have any ideas....feel free to toss them over. Maybe in twenty years...something might actually stand there....other than grass.
at Monday, September 13, 2010 No comments:

It's not much of a story. Some teenage British kid...seventeen years old....sent an email to the White House, while he was intoxicated. He had been watching some update program over 9-11, and got upset...then rattled this e-mail where he referred to the President as a "Pr*ck".

The White House intercepted the e-mail. Apparently, the President doesn't get a chance to read all of these messages. They sent the Secret Service the message, and then the British cops took over at that point. The British cops visited the kid and then took his picture, and then banned him for life from visiting the US.

I paused over this commentary and the reaction by the US State Department. So, you get banned from visiting the US, if you refer to the President as a "Pr*ck"? Really? This is the enormous power of the State Department? I looked around...thinking I could find this "Pr*ck"-rule....but so far, it's not coming up in my Google searches.

Was there some law passed by Congress and the Senate to protect the mortal being of the President...and simply worded something else besides the "Pr*ck"-rule? Maybe there was some rule added in the 2,700-page universal health-care bill? So far, I'm having no luck.

They asked the kid how he felt. He said his parents were a bit upset....but frankly, he didn't care much. I get the feeling that the last thing on his mind...is to visit the US, and there just might be two or three million Brits willing to utter "Pr*ck" a time or two.

In fact, I'm going to make this prediction that the next time that the President comes to Britain....it'll be a fairly large British crowd there to welcome here at the airport...and starting yelling something to get his attention. The US media will try to figure out how to bleep the noise, but I'm guessing eventually someone will get the clip to YouTube...and the "Pr*ck" audio will become this comical event.

So, my advice here....if you got something to say...just verbally say it...and avoid this e-mail business. Folks take e-mail more personal than just a verbal insult that you might hurl at them. Don't ask me why...it's just this modern world that we live in.
at Monday, September 13, 2010 No comments: