The Wicked Old Witch of Delaware 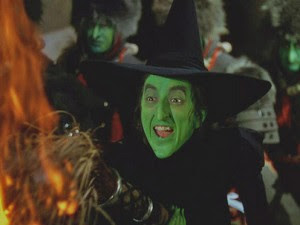 Over the last couple of days....several media folks have suddenly wanted to talk up on the Republican candidate for Senator in Delaware, Christine O'Donnell. The story goes that Christine was into witchcraft, and that she may represent a whacko type group (such as the Tea Movement).
For the record, Christine got into the Wican religion in her youth.....and hasn't been around this stuff in twenty years.
I paused over this mention of witchcraft. I pondered for a while.
I'm kinda wondering if Harry Reid is a bit fearful now of having a real witch in the Senate? Is he worried? You have to remember....she's a witch....and not one of those voo-doo gals who do the little doll and jab it with needles.
Would the other Democrats in the Senate be worried over possible witchcraft being used against them? Are they afraid of what she might conjure up in terms of spells? You know...witches could fix up love spells....to make guys get all dopey and stupid. This could even affect John McCain, and perhaps turn him into a lovable big teddy-bear.
Is there a chance now that we've finally triggered fear in the heart of all liberals.....by bringing in a witch? I watched CNN mention this and they desperately wanted me to worry about this. I saw the same on ABC, MSNBC, and even Fox News. They've basically worked hard to convince me that folks are now worried about this witchcraft business.
So what we are saying here....is that the wicked old witch of Delaware may actually exist and we've got to do everything possible to make sure that OZ stays pure and safe? Keep the witch there in Delaware, and preserve the innocence and purity of the Senate?
At some point, a guy from Bama starts to ponder over this for a while.....and starts to think that a bunch of folks with journalism degrees are mostly working themselves into a situation where they can write movie screenplays rather than real news stories.
at Monday, September 20, 2010 No comments:

I had a chance to watch Jimmy Carter last night on 60 Minutes. I held the view in the early 80's that Jimmy Carter probably had no real executive background. I viewed his "act" as mostly like a uncle who lived in the neighborhood who repaired mowers. He always had sixteen of them disassembled and sitting on the bench....telling you the various problems with each....wanting to fix them and wishing he could add another sixteen other mowers....but never having the full know-how or the parts to do the job right.
The Sixty Minutes crew gave him time to tell his stories and woes....and by the end....I still viewed the Carter years as mostly a comical period when you wanted leadership and you got something less.
Jimmy wanted you to know that he passed a huge amount of legislation....far more than Clinton, Bush, Reagan and just about everyone. CBS never challenged that. It is kinda true, but as you dig into the business of the 95th Congress which carried him through the first two years of the administration....you realize that he had a Democratic majority in the House, and a 60-member Democratic Senate. This was filibuster-proof. Jimmy didn't care to mention that part of the deal.
Generally, for every three positive things that he got passed....he also got two stupid things into the mix as well. Most historians will agree that the handling of the Panama Canal came to be a mess by the end. There are dozens of other pieces of legislation that came the same way.
At some point in this conversation on Sixty Minutes....Jimmy then expressed this hostility of full control over the legislation business....but then having folks demand something in return to get their support. You could tell he was gritting his teeth.
Here he was with full power in both the House and Senate.....and folks were demanding a favor to support his agenda. Jimmy had no background in understanding DC or how things worked. He'd never gotten into any negotiation in his entire life. And he started to stumble.
By 1979, the filibuster-proof Senate came to disappear. Now, there had to be more discussion. More negotiation, more favors, more hostility to be mentioned in the press.
By the end of this 60 Minutes piece....I kept thinking this has a curious look similar to the current situation with congress and the filibuster-proof Senate episode. You can see several issues with the current administration and how they fit into the Carter-model.
By the end of four years with the Carter administration.....most folks didn't have this positive feel for a national president. They had this image of some guy who was less. Toss in the Iranian hostage episode....and it was a guaranteed loss.
The tipping point of the 60 Minutes piece? Jimmy wanted everyone to know that he had an opinion and he would just state it anytime he felt like it. He sent the letter to the UN Council to counter President Bush on the Iraq action, and he felt his judgement and letter were appropriate under that situation. I'm guessing he won't feel bad if he reads my blog because I'll offer the same type of judgement.
at Monday, September 20, 2010 No comments:

There's a couple of comments from the Sunday political comedies where the administration and elites of the Democratic party intend to create a new strategy.....saying that the Republican party is about to be taken over by the Tea movement. I read over five or six of these commentaries and eventually started laughing.
It's like these writers were all given notes by someone to say basically the same thing.
I'd like to ask a few questions but I doubt that the press or media will answer them.
Aren't the statistics showing showing Democrats joining the Tea movement.....and likely make up a minimum of fifteen percent of the effort now? And isn't there fairly significant Democratic participation in the south?
If this were anywhere near being true....what about the environmentalists who've taken over a significant portion of the Democratic National Party? What about the union guys who've taken over a segment of the Democratic National Party?
So, there's ground rules where a political party can't evolve? And the Tea movement is breaking one of those ground rules?
The chief worry of the Democratic Party? They worry about the changing of the other party?
Lets get this right, America votes and elects a president whose big campaign slogan is "change", and it's "change" that is only limited to the Democratic Party?
It's comical in a way....around fifty days until the election, and the best strategy that you can create is a discussion over the other party instead of talking about the things you've accomplished or the things you want to do. In a typical news setting....real journalists would notice this and ask why, but we live in a odd world where journalism died in the 1980s.
at Monday, September 20, 2010 No comments: