A Study on Ineffectiveness?

Around three months ago, Mr Gates....our big Pentagon boss....got around to asking some big questions on his staff, and found that a number of folks didn't know who did what.  In fact, there were contractors hired but the staff under Mr Gates just didn't have a grasp of who did what or why.  So he challenged them, and basically brought DISA into this discussion.  At some point, they made a decision and it got explained today.

I kinda felt proud of this announcement.  It's like K-Mart admitting issues and asking Wal-Mart to take over operations.

Well....that lasted about a minute, until I got to the bottom of the article.

One former senior Senate defense aide questions moving any NII functions to the Defense Information Systems Agency, asking: "Why would you move parts of the most ineffectual office in OSD into DISA, which is the most inefficient organization in all of DoD?

Yeah, well, it's a fairly harsh accusation....DISA being inefficient and such.  Yeah, well....it's hard for me after nine months to argue against this comment.

To put this in a good prospective?  I sat and pondered over this, and came back to a Bama-like situation.  Working around this organization is kinda like being invited over to bale some hay and haul it for some local guy.  The problem occurs when we (DISA) arrive at the field of hay.

First, six guys will wander over to the baler and ask for the certificate paperwork that it's in working order.

Second, two guys around the barn will begin asking for a plan on how each bale will be laid out in the barn.

Third, one guy will halt the operation until a safety review is done.

Fourth, two guys will refuse access to the one jug of ice-water on a 95 degree afternoon because it's not marked "pure water".

Fifth and final, eight guys will refuse to move any bales until a consolidated plan is written and agreed upon by forty-four different parties (some live out of state and just couldn't make it that day).

Yeah, so I kinda understand this 'slam' on my organization.  Course, this would make a great masters degree evaluation as you take one ineffective group and layer them over another ineffective group.  Can we improve the ineffectiveness by fifty percent?  Can we lose some of our ineffectiveness?  It's a dynamic thing....which you'd best just forget and hope that things can only get better.
at Tuesday, September 28, 2010 No comments:

There's this big deal being made in the press over FBI agents cheating on a test.  I finally sat down and read through the details today.

Basically, congress determined that no one was sure that the FBI knew or understood the 2008 Domestic Investigations and Operations Guide (lots of nifty FBI details that concerned operations after 9-11).  So they demanded the FBI agents go and read the manual and then take a test.

The comical thing about this....was that it could be a open-book test.

So now, there are accusations about a number of guys who copied notes....advised other folks on what was on the open-book test, and twenty-two FBI guys are accused of cheating.

I sat there for ten minutes.....trying to contemplate how an open-book test could ever involve cheating.  The Air Force introduced me to open-book tests years ago.  They would hand you the regulation, and then ask you to read the five-page reg, then take a twelve-question test.  I sat there the first time, and asked the guy if he was sure about this open-book thing....and he just grinned.

Later with the University of Maryland, I had two or three of these tests.

It's hard for me to envision open-book tests and how legit they might be.  Then I have to imagine some folks who actually would accuse me or someone of cheating on a open-book test?  We've got serious issues here, but it started with the idiot who felt a test was necessary and then grinning over the idea of just making it a open-book test.  Too bad doctors never get opportunities like this....or nuclear scientists....or engineers...but at least the FBI thats supposed to protect us....gets to score this way.
at Tuesday, September 28, 2010 No comments:

The Sense of a Dime-Turn

Up until yesterday, James Heselden owned one of the most popular and growing companies in the world....around the famous Segway.  If it wasn't so dang expensive....probably every single farmer in America would be out and about on a Segway to check his cows and mend fences. 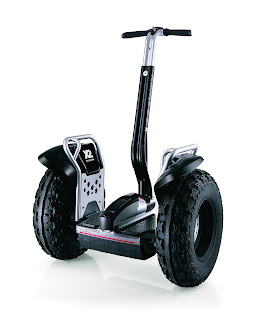 Yesterday, James took one of his two-wheel scooters....the off-road version....on a pretty dynamic trip, and ended up going off a cliff on his property.  Based on comments in the British news....he simply came around a corner and likely failed to apply brakes early enough....and then just rambled off down the side of the cliff, dying right there.

There are a million ways for a guy to go in the end.  You'd prefer it being in a dramatic fashion, without alot of pain or grief. You'd certainly like to add the element of adventure into the moment.  I doubt seriously that James had much of a chance to think about that last five seconds.  He probably kept thinking that it'd stop on a dime....and with a bit of loose dirt....he guessed wrong.

Will it change the perception of the Segway?  No.  I think if the price ever gets low enough....there's hundreds of thousands of farmers who'd jump up and buy one for practical purposes.  And over the course of that next year....probably 300 of those farmers would also go right off some cliff or hillside as well.

Deep into my family history....going back to the period between 1800 and 1840....one of my ancestors in his elder years had a blind mule, and ended up on the side of some cliff.  Something spooked the mule....maybe even a bee came up at the right moment....and the mule and my relative went off into the great beyond.  Folks make mistakes like this...misjudging distance and just how things can or can't turn on a dime.
at Tuesday, September 28, 2010 No comments: