From the science world today....an interesting thing to think about.

Some guys got around to digging up some old bones around Stonehenge, and then came to analyze these. Over the past decade, they've gotten into a number of things that bones can tell you. These two sets of Stonehenge bones....came back with a shocking tale. 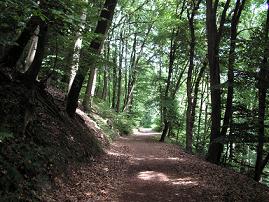 One set came from some teenager came from Germany....around 4,300 years ago. The German kid had a serious leg condition, and was likely in serious pain most of the time.

The second set? From another kid...around 3,500 years ago...probably from the Mediterranean region....with the guess being Italy, Spain or southern France.

The key things here?  Both died in their teens.  Both were brought an enormous distance over 3,000 years ago because of a significant belief in something.  Neither spoke the language of that region, which mean an absolute trust in the locals and the visitors.  Finally, this journey took a minimum of 45 days....which is a fair amount of walking.

The article went to suggest Stonehenge as a cult center....where people were told legends, and absolutely believed in them.

I sat and pondered over this.  A walk like this would be similar to a guy from Mobile traveling to Springfield, Missouri  (690-odd miles).  You had to make your way to the coast, then find someone with a vessel to take you over.  You had to have a map of some sorts...to guide to this Stonehenge location.   Then imagine all of this without roads, modern compasses, or realistic maps.  Then toss in the fact that you had to believe in something significant at Stonehenge, to make this enormous journey.

Look around today.  Do you know anyone that's willing to jump up....with a staff in one hand, a backpack of dried meat, leather-like sandals, a rough map only, no compass, then travel up to forty-five-odd days?  I don't think you can find folks with this type of enthusiasm.

Finally, you come to the thing about legends.  Over 4,000 years ago....Stonehenge was already a legend in the eyes of locals....and those living a fairly long distance away.  People put an enormous amount of trust and belief into this.  I'm thinking we've yet to fully grasp the big picture of this bunch of rocks in a cow field.
at Friday, October 01, 2010 No comments: