Over the weekend....this story out of west Texas came out about this couple out on Falcon Lake....between the US and Mexico border.

This guy, David Michael Harley, was reportedly shot by drug dealers or drug pirates out on the lake.  His wife...Tiffany....escaped and reported all of this.  The couple had been out on the lake on their jet skis.  David was shot in the head, and Tiffany just barely got away.

I sat and pondered over this story.  It's widely reported today.  Most everyone is talking big on Mexican drug dealers or pirates on the lake between the two countries.

Frankly, I've come to a point this afternoon where I don't believe the story.  I don't believe Mexican drug pirates shot David.  If anyone did shoot David....I'm a bit suspicious now that Tiffany did it.  The issue here is that his body hasn't been found yet.  Folks are still looking, but I have this funny feeling that you won't find the body.  I'm kinda curious how much insurance David had....and if he had a million-dollar policy.  Maybe he's dead, but I have strong doubts.

Maybe I'm wrong....but these strange stories like this.....have a funny twist to them.  So the drug pirate story doesn't work for me.  I just don't believe it.
at Monday, October 04, 2010 No comments: 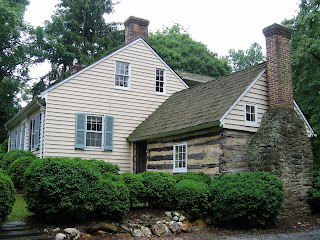 This is a story that you won't see on CNN, Fox News, or ABC.  In fact, you'd have to live in Arlington or in Maryland to hear about this....ever so briefly.

Over in Maryland, there was this house.  It had a log-cabin-like structure attached to it.  It'd been modified a bit over the past one hundred years....but it was still basically a log cabin.

There was this story attached to the cabin.  It was believed to be the original "Uncle Tom's Cabin" that was kinda the previous property of Josiah Henson, the model for the title character in Harriet Beecher Stowe's novel.  A number of folks believed in this house being "authentic".  So when it was suggested that the owner wanted to part with it.....folks got upset.  They demanded the state to buy it.

Naturally, you'd ask why the state should get involved in something like this....but the locals kinda demanded it and the political folks just fell in line.  Naturally, the price here was $1 million.

Course, you'd be scratching your head now....wondering how the heck any idiot could justify a log cabin being worth $2 million.  In the state of Bama.....even if you looked hard and found a really outstanding cabin....it'd never be worth more than $100k max.  But this historical significance business got folks all peppered up in Maryland.  So eventually, they found the $1 million.

Well.....folks came around in the past couple of weeks, and today in the news....they finally admitted that this house was built a fair bit after the Uncle Tom's cabin period.....and could not be connected to this historical period or character that they thought.  But, it's a bit too late...the deal was closed in 2006.

Oh, and the state spent another $1 million on studying the structure, and how to turn it into a museum.

What happens now?  Well....I'm guessing that some political guys will eventually figure out that some university in the region would operate some kind of fictional studies course within this log cabin, and you can rig up a visitors center to visit the fake Uncle Tom's cabin.

Course, if you did happen to have the original Lincoln cabin, or the Andrew Jackson cabin, or Davy Crocket cabin, or the Henry Clay cabin in your possession....I'm pretty sure you could get a million for that as well.  Not to encourage you to run off and do any fake cabin sales....you know.  Just my humble observations.
at Monday, October 04, 2010 No comments:

The Saturday Rally in DC

I ended up skipping the Saturday rally in DC...with the One Nation crowd.  I was thinking a massive crowd, and I really didn't want to get stuck there for hours trying to make my way back to Arlington.  Apparently, I was wrong about guessing on the crowd size.

Based on pictures and folks discussing the event....I'd make a pretty good guess that only around 80k were there as it started, with another forty thousand showing up by 1PM....but then a funny thing happened by 2PM as folks started to walk out (it wasn't supposed to end until 4PM).

The impression I got was that alot of folks rode buses for six to eight hours to get there.  I think they arrived to discovered no place nearby to eat.....and by 1PM....they were starving and tired.  Then by 2PM, they probably demanded their union group to round up the bus and get them out of town to some restaurant, and then on their way home (another six to eight hours).

That was the interesting thing about the Beck rally a few weeks ago.  I suspect that 90 percent had spent the evening at a hotel within two hours of DC, and likely spent another night at a hotel on Saturday evening, before driving home on Sunday.  They weren't tired or hungry when they arrived.

I kinda felt sorry for the union crowd who did show up on Saturday.  It was decent weather.  But you just can't hustle fifty thousand folks on a six to twelve hour bus-ride.....and expect any enthusiasm out of them.
at Monday, October 04, 2010 No comments: