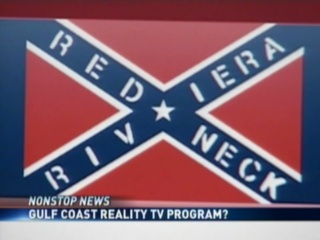 I was sitting there and reading up on Bama news today....when this five-star gem appeared.  Apparently, the good folks of Gulf Shores, our one and only resort town in Bama....had suddenly adopted a law requiring permits for filming.  To me, this started a puzzling pause.  Why would you pass something like this?

Well....word had gotten out that those nice folks who produce the near-naked gals and guys from New Jersey.....the "Jersey Shore" show....were now interested in a new show.  Reportedly, it would be called "Redneck Riviera".  Naturally, there's only place in America where this could be filmed....Gulf Shores, Bama.

Apparently, the political leadership were scared of what might come out of such a TV series and national attention.  So they went to work and required any filming within the city limits to require permission.

So, if you want to make a feature film, television show, documentary, or commercial...then you've got to pay $250 and ask for permission.  You also have to provide a "detailed description of the final product."

The chances of Gulf Shores getting this now?  Zero.

I'm guessing they just gave up $20 million in profits for 2011....if they'd just kept their mouth shut.  The kindly folks over at Destin, Florida will likely (in my humble opinion) now get the series.

Bama folks tend to get all worried when TV folks show up and start talking production.  It's like something personal to them.  Once you feature their town in any kind of light that might not be really positive....it's a negative.  Course, after you watch two episodes of Jersey Shore.....and you start thinking about this.....we'd probably all say we don't want any Bama gals dressed in tube tops acting like trailer park sluts on national TV....you know.
at Thursday, October 07, 2010 No comments:

I tried to imagine this.   There are currently 199 L.A. County workers who make at least $250,000k a year.  The LA Times reported this yesterday.

I grew up in Bama.  My county would be best described as lower-middle class.  It's mostly farmers and folks who make $35k a year.  County workers?  Half of them still make in the $25k to $35k a year range.  I would imagine the county DA probably does pull in $80k a year.  There's probably around five or six guys who might be making in the $70k to $80k range.

It's hard to imagine having almost two hundred county employees who pull in $250k or more a year.  Just the sheer pension anchor would make you almost shed a tear.  How would you guarantee life to sustain itself beyond another decade within the state?

This is the Titanic.  It's hit the iceberg, and you are free to sit and watch it sail around in circles for five years....waiting for some rescue vessel to pull up and 'help' them.  I'm pretty sure it won't be a pretty thing in the end.
at Thursday, October 07, 2010 No comments:

The Lack of Trust 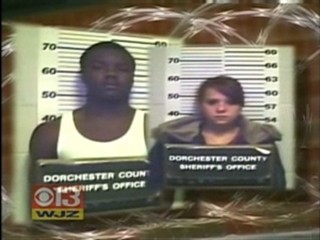 So, this is a story that makes you just scratch your head.  It happened in my neck of the woods and was finally reported yesterday.  I doubt it makes the national news, and you likely won't hear it about it.

Around ten days ago, out on Quail Run Road in Northern Dorchester County, Maryland....some bullets were fired through the back sliding door of a house.

It was evening hours.  Folks were sitting there at the time, and they dove to the floor and called the cops.  No real injuries.

It was a curious thing because cops had come out the day prior.....the house had been robbed. In that case, the cops had quickly figured out the party involved...some sixteen year-old kid from the local high school.

It was a curious thing, this robber....was the boyfriend of the daughter of this family who'd been robbed.  They attend the same school.

So the cops just felt a bit of 'luck', and went right back at the sixteen year-old boy....finding out about cell phone that he'd given to the daughter....for communication privately between the two.  Yes, there were some text messages.

This daughter of the family who'd been shot at....Katelyn, had started up this message....suggesting that the boyfriend kill her parents, and everyone in the house.  She even told him the time to pursue the attack.  Naturally, it was at the time of the actual attack.

Cops arrested both.  There's not much to admit to....but apparently, she's already admitted to most of everything they've suggested.

I sat and pondered over this.  I suspect the boy will be bailed out within a couple of hours.  The girl?  Well....if this was my daughter, I'd go ahead and put the house up for sale now....and start looking to put distance between the family and the daughter.  Helping her out wouldn't be in my top 100 priorities in life now.

You can't trust her under any circumstance.  You can't bring her back to the house.  You can't offer her birthday cake.  You can't offer any sympathy.  You can't dream of her marriage to some smart guy.  You can't have hopes of her graduating from any community college or pursuing a military career.  There's not much of anything that matters with this sixteen year-old daughter now.  Trust is gone.

There's probably a book to be written over this situation one day.  Maybe even a movie to be made.  Life will go on for most everyone.....except on a separate path, that's my perception.

In an election year, folks tend to use a lot of creativity on both sides.  The difference from the past?  Video clips tied together are pushing into a bold new world.