What If They Just Stood Up?

Over the last twenty years...I've sat and watched various episodes where political debates and situations were dominated by an agenda that knocked the Republicans back a notch. They just took it and growled about it.... pursued things as best as they could. In Bama, we'd label them wussies because of this "don't mess with them" attitude.

The curious thing with this Tea Movement....is that things have kinda gone a different direction. And when some moderator or "control element" would kick in...to knock the Republicans back and they were going to take that normal stumble....the Tea Movement guys suddenly pick up the slack. I've watched a dozen episodes since July occur. This video-clip below...is the latest.

Basically....you don't ever have the Pledge of Allegiance uttered in a sitting like this...unless you get down to a small-town atmosphere. It's typically not the norm. So when someone calls for a point of order in this debate....with the League of Women Voters gal.....and she puts them down in quick fashion....then the Tea guys unglue the event very quickly.

The negative? The 2012 Presidential race promises to be an event that will shock people. I'm not exactly positive about that...and ponder upon the implications.

During election periods....there are always ballot initiatives which kinda surprise you. Here in the local region, the Maryland guys have an interesting deal up for state vote.

If it passes, Maryland would have a rule where a fee would given to folk's insurance companies of $300 and $800 per ambulance ride. Never mind the fact that most cities and counties already fund the guys....this would be extra money in the pot.  Some folks think that the city and county management folks would lessen their money given, but this isn't a promised deal.

Then you have to take into account the overall rule.....this fee assessment to your insurance company might not be paid.  There's more than just a few insurance companies which don't cover this except in car accidents.

Then you consider that this is for county residents only.  This got me to reading into the rule.

If you are a uninsured (in any fashion) state resident....you don't pay.  Non-state residents?  You'd get the bill yourself.  Course, you might just walk away and the county wastes $2k in going after you for $350, that's the comical side to this story.

The part that amazes me....if you had no insurance at all....you get the free ride.  The folks with insurance....end up funding your free ride over to county general or the city emergency room.

Early voting has started throughout America.  So folks are showing up at county and city offices to vote.  This week in Texas.....reported by KHOU, there was a problem at a voting station.

Some gal showed up with her momma and wanted to vote.  Everything was in order....except the voting guy pointed at the shirt this young lady was wearing....which was a 2008 Obama for President shirt.  You couldn't vote with this shirt on.  The guy suggested just turning it inside out, or putting something over it.

Course, the lady got infuriated.  She thought this was a new rule....but they pulled out the rule and it was from 1985.  She wasn't happy.  Momma was all disabled so she needed help but the guy in charge wouldn't allow the daughter to enter the voting area...wearing the Obama t-shirt. 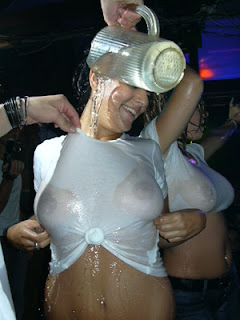 I sat and pondered over this.  Being from Bama.....if I grasp the rule correctly....you can't wear a political t-shirt, under any circumstances.  But you could dump a bucket of water on a lady's t-shirt (braless of course) and she could readily enter and vote for any idiot she wanted.  Wet t-shirt contest....in a public voting station....ok?  But no Obama or McCain or Vote for George Washington t-shirts?

Oh, and I'm sorry for you folks from Bessemer or Gadsden over my choice of pictures.  I realize you folks never partake in wet t-shirt contests, and only have read about such activities from faraway places like Knoxville, Montgomery or Huntsville.  But don't worry....you can vote like this.  Just don't wear a politically-minded shirt.
at Saturday, October 23, 2010 No comments:

How Money Burns Holes in Your Pocket

Bringing greater transparency and accountability to the workings of state capitals across the country.

If you had $1.8 million in your pocket, and were trying to think of good things that you could do in life.....would the statement above be better than helping the poor rebuild the homes in New Orleans, helping to feed the starving in Haiti, or helping people with housing troubles because of the economic times?

I was pondering over this George Soros deal to National Public Radio (NPR) involving $1.8 million, which would pay NPR to have two reporters in each US state to cover only state capital business.  This comes from George's Open Society Foundation.

It's pretty bad now when you sit there and listen to four hundred various reporters explain whats going on in DC in an average week....and you literally want to weep over the insignificance of DC, and the idiot four hundred reporters.

I spend around twelve hours a week watching various news programs.  There are three simple observations about DC politics.  First.....for every forty hours of political time invested....there's actually only one minute of real production (if I use an engineer's measurement).

Second, folks now know more political names and faces....than they know from their local church, NFL football team, or the cast from Lost.  Daily operations via the media turns the republic's political figures into soap opera actors.  Doctor Reid is having trouble with Doctor Mitchell.  Nurse Pelosi says alot of things to upset the staff in general at the hospital but can't be fired because "Days of our Political Lives" would be lost without her.  And there's some Tea Movement guys at the front desk who want part of the hospital shut down because it's empty anyway.

Third, we have to admit...we are now entertained by this...which is a sad moment of reality.

So we turn to the $1.8 million and this effort to go beyond just reporting DC politics hour-by-hour, and now bring political news from Pierre, South Dakota at the same level?  Or will we sit there each evening and catch a one-hour session of political updates from Lasing, Michigan....wondering if the state bingo law will be enforced or changed or updated?  Or will we sit and listen to NPR each evening in Bama....to get informed updates on dry versus wet county status in the state, or listen to hours of bingo discussion?

This infusion of politics in our lives.....makes us better?  It makes us more transparent?  It brings accountability into our lives?  Politics in DC has not improved a single bit in terms of accountability over the past fifty years....corruption still occurring on a daily basis....by both parties.

This is the best that George Soros can do with $1.8 million laying around?  I think George might want to just invest the money in banjo lessons and redo the landscaping to his backyard.  That might be a better investment.
at Saturday, October 23, 2010 No comments:

Analogy of a Dashiki

Alicia Shepard is the ombudsman for NPR.  She's the one who is supposed to guide the organization on journalism ethics.

Today....to offer her vast analysis over Juan Williams and his firing.....she spoke: "I can only imagine how Williams, who has chronicled and championed the Civil Rights movement, would have reacted if another prominent journalist had said: ‘But when I get on a plane, I got to tell you, if I see an African American male in Dashiki with a big Afro, I get worried. I get nervous."

I sat there for a while....pausing over this comparison.  An African-American guy in a Dashiki with a big Afro.  Nervous?  Me?  Worried?  Me?

I reviewed a moment of history over forty years in America.  How many African-American guys in a Dashiki and a Afro....ever did a mass killing?  Answer?  None.

In fact, if I were on an airplane, and some Islamic character was a threat....the one guy I could probably count on is the African-American with the Afro....whether he had the Dashiki on or not.  It'd be a race between me and him over which one could take down the Islamic dimwit faster.  Later, we'd share a beer and compliment each other on the technique of taking down a fool.

Alicia Shepard....I realize you've got a pretty good job with NPR....but I suspect that your vast analysis has kinda sunk to the bottom of the harbor with the anchor.  If this Dashiki comparison is the best you can whip up....I'd start looking for a job with the city newspaper up in Boise.  In fact, I'd like to challenge you to find a case where a Dashiki-dressed guy in America has ever gone out and killed anybody.  Come on......you've got brilliant thoughts on this topic....surely, you can support your statement.

For NPR....a suggestion here.  Your brand-name has slipped.  Your sales job is comical.  I'd almost suggest that you guys are attempting a Monty Python-moment.  Perhaps it's time to hire some Islamic guys to run your ombudsman program and do a daily show on Islamic life in America.  I'm pretty sure your consumers would enjoy the entertainment.
at Saturday, October 23, 2010 No comments: