We Thought It Was a Simple Charger 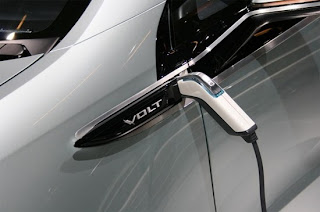 Around two months ago....the President showed up at GM's plant and got all peppy over the Volt. This is the new GM product which will run off batteries.  At the time....folks questioned the wisdom after hearing the Volt ran around $41k (not including state & local taxes).

This week, another piece of the Volt puzzle came into play as a guy had a test period with the Volt and realized further implications.  The home charger would run to almost $500 (so if you wanted a second charger for work, just double that).  The nifty about this charger....is that you don't just buy the box and plug it into the wall.  You have to pay some certified electrician roughly $1,500 to install the box for you.

This one good charge will get you 40 miles in electric range.  Naturally....you might question the $2k you have to pay....just to get it charged up.

In this test situation, the home owner then discovered that they were on a low-tier of electrical usage....so they naturally paid less than bigger homes.  The addition of this Volt-charger, apparently pushed the home owner up a notch or two....so the cost factor was a good bit more than desired.  But then a more fascinating piece of this charger came into play....this electrical hook-up was separate from the house....so it didn't count as home usage.  This was in California but you can imagine state-by-state....every single hook-up will be different.

For GM, the Volt represents a fair amount of investment.  The US government will likely be one of the big buyer's of the car (and it's charger)....and eventually the same US government will come around to admit their their electrical costs have jumped substantially.  You can imagine this massive structure of chargers for all of the federal cars in California.  All hooked up on some industrial scale system and the federal budget folks trying to figure out how to do things cheaper.  Eventually...someone in a meeting will suggest that there's this thing called gasoline and it's alot cheaper than electricity.

I don't see the Volt ever becoming a major car in sales.
at Sunday, October 24, 2010 No comments:

The Art of Screwing Up

Lots of interesting things happen in DC.  You folks in the heartland miss out on this massive soap opera that occurs daily.  Today....the DC cops got called over to the Georgetown University.

Over the past two months....there's been a number of robberies and violent crime related to this historic campus.  Things are apparently upsetting the norm, and even the campus management crowd are asking more questions than usual.

This morning?  Someone walked by a room in a freshman residence dorm.....and there was this funny chemical type smell.  They called the cops.  The cops come....then evacuate all four hundred residents.  Georgetown is this upscale, private university, that parents pay $40k a year between tuition, room & board, and pocket money for Johnny or Sally to be 'happy'.  It's not a cheap place, and they really don't want issues on campus.

The issue for the evacuation?  A meth lab.  The cops have two of the freshmen under apprehension and will likely charge them with some serious crimes.  You can figure at least five to ten years for each.  I'm guessing by 10AM....two father's were getting calls and then getting their attorneys involved in this mess.  The boys will be bailed out by tonight but their future is questionable.

As a minimum....they are finished at the college right now.  Their records will reflect the reason for the dismissal.  The ability to get into another prestigious college?  Zero.  The chance of getting into Montana State University?  Maybe a fifty percent chance.....after they've done rehab and their jail time.  I suspect that political donations to the local parties will occur and help in shaping their case in the end.  Both will likely have to pay for the clean-up and damages (figure $200k) and have to spend at least twelve months in some DC jail.  The parents will have to be happy with that deal.

As for the kids who live in the dorm?  Well....it's defined a a chemical hazard area as of this morning.  It typically takes two or three days for a clean-up team to go through and detox an area and sign off as "clean".  The kids in the dorm will have to be housed locally, or in hotels....probably through Monday night.

More dorm inspections?  Yeah, I'm guessing that a weekly inspection will occur and involve five to ten percent of all the rooms.

For the cops, this is a strange event.  Here were upscale kids.....likely getting a $1k a month for pocket money, with free room and board.  They were guaranteed a great job in life after four years.  All they had to do was drink beer, eat pizza, attend class, and get marginal grades.  Why screw this up?
at Sunday, October 24, 2010 No comments: