It's an interesting story over in Memphis...compliments of the Memphis Commercial Appeal.

Basically....some guy is in a Memphis store on Friday morning (Black Friday)....real early in fact (around 5AM)....and some folks start to comment to him that his pants are too low.  Yes, the guy's underwear was in full and absolute view....which a number of women (older women, I'm guessing) were just plain disgusted with his appearance.  Somewhere in the mess of this view...an off-duty cop went up to the guy and told him to pull his pants up...which he apparently complied (at least at that moment).

But then guy comes up to the cashier later....and the pants back down showing all his underwear....and there things went into turbo mode.  A whole bunch of profanity was then used, and the off-duty cop was watching this entire mess proceed.  So the cops got called by the store.

The cops arrive, view the situation...and arrest the droopy-pants guy.  Charges?  Indecent exposure and disorderly conduct.  I'm guessing...if convicted in the local court....he could be looking at thirty to sixty days in the local county jail.

The thing about this...is that if you get convicted and show up in county jail...over droopey-pants....the other guys in the jail are going to laugh their ass off.  You can see this guy trying to explain in a serious manner how he got there, and they just won't buy this.

And your reputation around the neighborhood now?  I'm guessing that some women are now willing to call the cops anytime they see this joker on the street with his pants pulled low.

If you got to get into trouble....it's best really do something bad, and not for some stupid pair of pants pulled eight inches down past the point where they ought to be.  If you feel that way...why even bother wearing pants?
at Sunday, November 28, 2010 No comments: 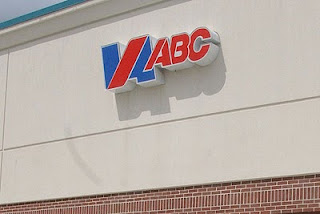 There was an interesting story in the Washington Post on Virginia yesterday.  I sat and pondered over it a while.

For those of you not familiar with Virginia....we are very careful here about selling folks alcohol.  After the dry-county business....the Virginia method is probably the next worst step.

If you want beer or wine, in Virginia, you can stop and pick up some at any local grocery.  Even drug stores will sell you beer and wine.  The alcohol content is kinda limited in this case, but eighty percent (my number) of Virginia folks are happy with this deal.

But when you come to discuss real booze.... whiskey, rum, and vodka....that's a different story.  You've got to buy those from a state-run store.  When I first got here, and asked about the nearest store to my apartment....the response was two miles.  I couldn't really complain about this distance.

For a long time, I thought that most communities all had access to these state-run alcohol stores.  But after reading the Washington Post story....I came to realize a different situation in Virginia once you get past the metropolitan area.  There are actually counties out there in the western section of Virginia....where there's not a single state-run alcohol store in the whole county.  So you'd have to drive a minimum of thirty minutes...to find a store, and it might be a county away.

There are thirteen counties in Virginia without a single sales point for real booze.  They can buy beer at Larry's Grocery or wine at Jimmy's stop-and-shop, but if you want whiskey....it's a drive to the next county.

The governor has gotten into this discussion and wants to sell the whole management of this business over to a commercial operation....where the number of stores selling throughout the state might go from 332 stores to a thousand stores....thus bringing Jack Daniels to the poor folks in those thirteen counties without quick and easy access to alcohol.

Naturally, there are forces of evil at work....trying to tramp up the governor and his plan. The Baptist General Association of Virginia....with over 1,000 churches in the state are highly concerned about this, and really don't want booze shoved down their country's throat (beer and wine are acceptable apparently).

The best quote in this effort to deride the governor's agenda....came from a Baptist minister here in the metropolitan region of Virginia: "I'm just tired of burying alcoholics."  I sat and paused over this....thinking there must be a whole bunch of alcoholics in the Baptist Church business around here....if I were to take the literal meaning of his quote.

So the war is on.  The state would likely make a bit more on tax revenue....which they'd naturally always respond that it'll pay for schools (like bingo, casino gambling, and anything that is immoral), and that makes folks typically feel good.

I'm guessing that the effort will eventually happen and folks in thirteen counties will be happy to finally have a place where they can buy Jack Daniels right around the corner from their house.  That's probably one of the ten essential things we need in life....if you think about it long enough....and sip something with just a little bit of alcohol in it.
at Sunday, November 28, 2010 No comments:

The Rest of the Story: Willie & The Pot 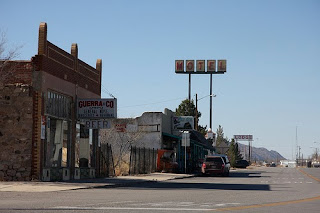 Originally, I read over the Willie Nelson arrest of this week, and just passed.  The news piece was that Willie Nelson was arrested once again, for having pot in his possession.  It's really not much of a story....Willie has been arrested before.  Willie has admitted that he considers pot not to be much of a worry in the vast world of things to worry about.  Willie will likely be arrested in the future....if anyone really cares.

But for some reason, I went back to the story and started digging what wasn't in the 8-line story splashed across the news.

Willie was on tour....by bus....and the bus had come along to this town out in Texas, by the name of Sierra Blanca.  I've driven a good bit in Texas and know of a lot of towns in Texas....but this name didn't mean much.....so I started looking into it.

It's a curious town.  It's just east of El Paso, and actually the county seat of Hudspeth county.  Population in 2000 Census was around 533, but curiously....it's reported in 2007 as being 510, and very likely decreasing in population every single month.

It's a curious place, where a legend is born.  When NY City was finally told in the late 1980's that sewage dumping out on the high seas was morally and legally wrong....they spent a fair amount of time looking for a place to dump 250 tons of sewage per week.  Someone from Sierra Blanca raised their hand and had ranch property where they'd accept the sewage.  So it was taken by train-car all the way to this town and dumped for several years until folks finally got tired of the reputation involved.  They also started to talk about the spray being used to keep the smell down....you kinda had a choice....either permanently smelling sewage or permanently smelling lysol-like scents.

So, here's Willie and his bus....traveling down the road, and there's this roadblock set up by the US Border Patrol.  I sat and read this through several newspapers.....thinking it was a screw-up.  Why would the Border Patrol ask for anything more than your ID?  For the life of me....I'm left wondering why they jumped onto the search of the vehicle and did the big discovery of six ounces of Marijuana.

The impact now?  Well....if convicted, most folks think he might have to serve 180 days in the local county jail.  I'm thinking the last thing on Earth that the county sheriff now wants....is to have Willie Nelson at your jail and having a bunch of folks show up in town to question your number one guest.  I'm also thinking that Willie is bold enough at this age.....to just smile and suggest he'd like six months in the county jail, as long as they'd accept him carrying his guitar along as part of the deal.

Road blocks by the US Border Patrol....and you don't aim at getting any illegals but just searching folk's cars?  Is that what we've come down to?

At the end of this whole episode, I came away with one new insight....we ought to have more harmonica players analyzing the news.
at Sunday, November 28, 2010 No comments:

Another Nut Bites The Dust

From the news....we have a report of another dimwit Muslim US citizen who wanted to do something to help his cause.  In this case....the guy wanted to put a car-bomb at the annual Christmas tree-lighting ceremony in Portland, Oregon.  Yes, the Christmas tree ceremony.

This guy?  Mohamed Osman Mohamud.   Pretty nifty name.  I'm guessing he's always had this legendary "got-to-do-something-big" passion in his life.  He was 19....old enough to drive, own weapons, and pay taxes, but not old enough to drink.  I'm still waiting for the day when some guy names his son Mohamed Mohamed Mohamud.

The kid was a naturalized citizen....from Somalia.  From news accounts so far....some one finally got observant of the kid and his comments.  They referred the situation to the FBI.  They checked his email....and here's his interest in going off to Pakistan to get real training on his passion of harming Americans.  The FBI rigged up a fake situation....a fake bomb....and just let the kid attempt to carry out his dream-job.

The likely charges?  I'm guessing they will be severe enough to keep the kid in jail for around ten years.  I'd be curious if they could revoke his citizenship, and just haul him back to Somalia to practice his crafts there.  No one has said anything about that possibility....so we'll have to wait on that part.

My impression is that you really have to sink to a pretty low opinion of yourself and your society...to dream up a Christmas tree ceremony to kill folks.  The odd thing here....he'd finished up high school in 2009, and had gone into the second year of college over at OSU (aiming at an engineering degree).  There's a Islamic Center at the university and the kid had been around it to a small degree.  But then the local Imam says a pretty comical thing....that the kid was doing a number of things against the religion, and living a lifestyle against Islam.

By his comment....I'm thinking the Imam had noted some personal habits by this kid which made him pretty unreliable and immature.

So tonight, the folks in Oregon can rest assured....another nut off the streets of the state and another safe Christmas tree lighting ceremony.  The worst you'd typically have for worries is a dead car battery after you'd watched the ceremony in fairly cold weather in the evening hours.  I suspect everyone is starting to look over their shoulder, and trust has gone down a notch.
at Sunday, November 28, 2010 No comments: