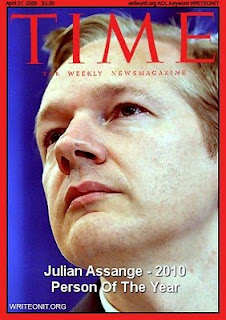 There are two things of interest today on Julian Assange....the WikiLeaks dude.

First, he got called down to the police station and the charges are being explained to him from Sweden.  Basically....he had unprotected sex with a gal....against her wishes.  Yep, no condom.  Sweden has laws about this, and he probably will have to be forced into a AIDs test, and then led to the prosecution table.  Sentence?  That hasn't been spelled out.

Second.  Rumors are that Time has decided that Julian ought to be man of the year.  Yep, condom-boy made it over Obama, Jimmy Carter, Lady GaGa, and 300 other dopey folks who probably had something more noteworthy than Julian.  I'm guessing that Julian's achievements in Time won't include his condom usage or lack there of.  Time also probably explain the molestation charges in Sweden.  And they probably own't explain his James Bond-like persona which gets him all the hot lusty babes.
at Tuesday, December 07, 2010 No comments:

Typically....if you wanted to own a 1.4 acre piece of property in the boonies of Montana....out in the vast wilderness of the state, then you'd likely pay barely $2k for that piece of property.

A few months ago, a piece of property in this described area....was marketed for $154k.  It was the former property of the Unibomber.  With no interest from the public....the real estate company in control of the property has now cut the price to $69,500.

The theme of the sale is "Own a piece of history".

If I were a betting person....I would bet on the property not being sold at $69,500.  The history of the Unibomber has come and gone.  They basically have 1.4 acres that might sell for $10k at best.  I can imagine some guy showing up from New Jersey....looking for a site to put a hunting cabin up, and doesn't have any idea who the Unibomber was but just wants a private place for a couple of sanitation advisers from Jersey to meet and discuss issues on a weekend.
at Tuesday, December 07, 2010 No comments:

I'm used to real winters (having spent fifteen years in Germany)....but the last twenty-four hours in Arlington have been a bit different.  The temperature currently is resting around 30 degrees, but there's a forty mph wind going on....so it's more like 18 degrees if you stand outside long.  You can bundle up as much as you want.....but it's simply not enough.  You can't wear a hat unless you've got it jammed down on your head.  And scarfs barely help.
at Tuesday, December 07, 2010 No comments: 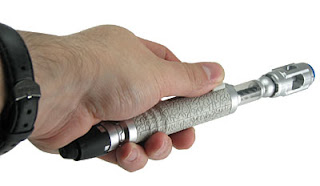 One of the chief things I like about Doctor Who...is the amount of technology suggested....which drives the rocket scientists to aim for the next generation of gadgets.

This week....the British Daily Mail announced that some smart British guys are out to develop this nifty tool.....a ultrasonic sound wave screwdriver.  Yep, the same tool that Doctor Who uses.

Course, this is a developmental project and major a decade away from actual production with some company.  But you can imagine the TV advertisement coming on for a $125 sonic screwdriver, and you rush down to Sears to buy your next toy.  You will admit to the wife and the co-workers that you really don't need it but it's such a nifty toy...you can't decline this chance.

Will people pay $125 for something like this?  I suspect they'd pay $500....just to be like Doctor Who.  Course, you'd have to have a nifty belt-holder for it so you could walk around and show the tool while in public.
at Tuesday, December 07, 2010 No comments:

I sat and watched the President do his root-canal act last night.  As he wanted to come out and speak of the agreement with the Republicans and Democrats to get the tax situation under control and forge ahead....he spent a good five minutes condemning the evil Republicans, and then spoke of he'd finally agreed with the proposal.  If he'd been a Baptist....it would have been like a construction bond for a new church being agreed upon....with Satan.

Afterwards, I watched three networks try to analyze this.  The MSNBC crowd mostly sat in a daze that he'd allowed himself to be cornered by the Republicans.  The Fox News crowd were not shocked but mostly amazed that he spent five minutes talking mostly negative then announcing how he'd agreed with them.  And the CNN crowd tried to tell a neutral story but wondering how exactly things proceed from here.  If more agreements are necessary (by CNN analysis), then the President is to be hit by his liberal supporters and lose more support from them.

From the last six Presidents....all would have come out and spoken in a positive sense over what was achieved and this was in the best interest of America.  So this first five minutes kind of surprised me.  Maybe, its the best way to keep your big supporters on the bus, but I suspect some people will note the start of the speech as some major negative turn of the Presidency.  This might be a speech worth remembering....but not for a good reason.
at Tuesday, December 07, 2010 No comments:

The WikiLeaks crowd woke to another problem today.  The Swiss postal guys....who operate a state-run banking system in addition to their post office job....dumped WikiLeaks founder Julian Assange from using their system with his fundraising efforts.

They came out and accused him of being a liar and shut off his account.  Julian apparently sent over a form as he opened the account and claimed that he had a place of residence during the account opening episode....which was simply not true at that point in time.

It's a curious thing how WikiLeaks operates.  They need hardware and data storage.  They need an IP and service provider.  It's not a garage operation anymore.  I would guess their needs are close to a million a year to run the "business".  Julian's pay?  For the most part....I don't think he gets paid, but they cover his expenses....which might drift up around $70k minimum a year.

Without an apparatus to bring money in via donations....it'll be difficult to maintain this network for an extended period of time.    I suspect alot of the supporters of the WikiLeaks mission are beginning to get lessons in business operations and are shocked how their goal is closely related to money and funding.  It's almost like a religious channel....with daily offerings tied to some donation at the end of the show to keep Reverend Jimmy boosted up enough to run for another week on the channel.
at Tuesday, December 07, 2010 No comments: