Movie Review: Shop Around the Corner 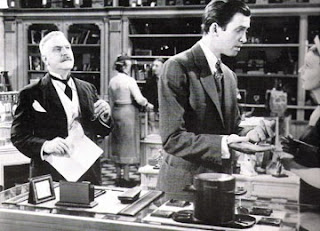 I sat and watched Shop Around the Corner today.  I'd never seen the movie before and was shocked at just how good the story was.

This is the original for You've Got Mail.

If I had to compare Tom Hanks and Jimmy Stewart....I'd probably still give Jimmy Stewart the plus-up.  He is as innocent as pure-driven snow.

My Man of the Year?

You've got this Julian Assange-character who felt that transparency was a great thing....so he grabbed a bunch of classified and published them.  And after three days....most folks kind of forgot about everything and just went back to the sports page of the paper.

You've got the President who ran through a pretty difficult year and probably is scratching his head over the successes and failures of the year.  He's actually having now to look over his shoulder at the likes of Huck and Palin....which is kind of comical but it's the kind of year that we have.

Then you've got Cam Newton who came through some unusual trail to the University of Auburn and achieved a immortal season and picked up the Heisman Trophy.  There are likely a dozen NFL teams just begging for a chance to sign Cam up.

You've got George Bush who published a book and then came around for fifty public interviews and seems to recovered completely from his eight years of war with the media.  His public standing is probably better than the Presidents current situation.

You've got the CEO guy from BP oil  who discovered that he probably shouldn't be a public speaker.

You've got Conan who got fired, and then came back on TBS.

There are dozens of picks...but my choice is Glenn Beck.  Not that I really endorse Glenn....but in a strange way....he's motivated well over five million Americans to rally up around an agenda that really isn't that clear. When the rally occurred in DC and I stood there to view the size of the crowd....I was surprised.  These were mostly folks over forty and this was likely their first big political fight in their life.  They brought their kids and took everything serious.

The Beck enthusiasm melted into the November election and likely was half of the reason for the massive twist of results across the nation.