Not That It Really Matters

If you challenged a great writer to write 1,924 pages of text....it'd be a hard and difficult thing to accomplish.  If you added the requirement that it had to be a spending bill....just to spend money....it'd typically be twice as hard.  Then you suggested that 20,000 earmarks have to be tossed onto almost 2k pages of texts....and you'd just laugh and say impossible.

But in America, we have men of legendary writing ability.  And yes, they can write 1,924 pages into a spending bill that would make even Democrats happy (although Republicans aren't apparently happy).  In fact, some Republicans are saying that they just won't agree to this much money...over $1.1 trillion....being used in a wasteful way.

The folks who into the upset mode for voting back in November....probably are sitting there and wondering how exactly any idiot would just keep toss money away after the results of the election.  My suspicion is that November 2012 is barely 23 months away now.  If I were some Democrat in a standing authority of leadership....I might want to rebuild my connection back to public.  You don't have time to waste.
at Tuesday, December 14, 2010 No comments:

Bus service in America was supposed to be totally extinct by 2015....or at least I felt that way a decade ago.  Locally, I'm now shocked at the enterprising attitude of our local bus service.  We have a operation operating in the DC area called Mega Bus.  For years, they had one destination....New York City.  They were running a bus an hour up to DC...for roughly $25 to $30.  You could ride up one morning....shop....spend the night at a hotel....and then ride back the next day.  It made sense.

I stopped over the listing for Buffalo.  Basically...a nine-hour bus ride.  Why would any idiot travel from DC to Buffalo?  That I could not understand.  Currently....you could get the ride for less than $20 as the start-up fee.  I'm guessing it'll eventually be around $50-$60 one-way.  What's in Buffalo?  Well....nothing much to brag about.

I kinda felt the same way for several of the destinations.

Buses aren't really disappearing but they are modifying themselves.  I could see a retiree group of five folks coming up and all taking a three-day trip via Mega Bus for a cheap price.  It makes sense.  Maybe this will catch on.
at Tuesday, December 14, 2010 No comments:

The first of the cases against universal health care law has gone turbo.  It's guaranteed now to advance to the Supreme Court.  The only question is how long it will take.

What amazed me the most over the entire nine months spent on this health care law....was that there were one hundred ways to build it and avoid the mandatory participation.  This would avoided the involvement of the Supreme Court and made it easier for people to accept.  None of these methods were acceptable in the end.

With the method of design in this case....I'd say that without this key piece of funding the law....enforced participation....then the odds are a failure at some point.  It almost makes you wonder if this was the belief on day one and the intended goal to start with.  You could naturally talk bad about the Supreme Court and then work to bring on a totally different court in the future.

For those who really needed the universal health care law....I wish you luck, but I think you better start looking for a plan B.  Your congress and senate failed you and they likely did it intentionally.
at Tuesday, December 14, 2010 No comments: 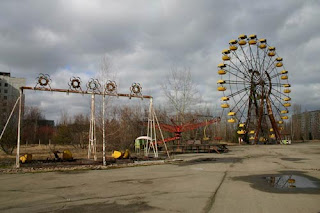 Today, the Ukraine came out and announced that they are opening up a special area in 2011....near Chernobyl.  The puropose is to let you view the sealed zone.

For those who don't remember, a short lesson in history with Chernobyl.  It was a pretty safe nuclear plant until the point where this back-up power engineer had this idea and convinced the guys in Moscow of an experiment.  The Russians are hardcore enthusiasts about bringing a plant down for maintenance on schedule. This requires a customized diesel engine which takes over the internal power functions of the plant and helps to ease to plant down to zero power.

This customized diesel engine is a huge cost item.  This back-up power engineer had this idea about using the power of the plant itself, to ease itself down to zero power....thereby eliminating the diesel generator.  He convinced the Moscow management crowd that this was ok.

So he arrives at Chernobyl and puts some defaults into places and they allow him to bring the nuke plant down.  Somewhere in the midst of this....emergency back-up processes kicked in, and the diesel generator kicked on anyway.  The experiment was a failure.

Our engineer went back and found these processes and then requested a second chance via Moscow to test his ideas.  This time....they weren't as eager but went ahead anyway.  So Joe the Engineer then pushes the throttle down....and somewhere in the middle of this mess....the plant doesn't have the power to ease itself down to the right level.  All hell breaks loose at this point.

It's safe to say that this guy has never been seen since this and no one in Moscow cares to admit that a stupid nuclear accident occurred because of an idiot back-up power engineer, and not a nuclear engineer.

I thought about this for a while and must admit that I would be curious.  I'm sure that you'd get four-star hotel treatment.  You'd probably get some great food.  And the locals are probably real friendly.  The question is....what drives a guy to go tourist at a nuke plant in the Ukraine?

After a while, it occurred to me that you'd likely have some awful charming and lusty Ukrainian gals as tourist hostess gals.  And they'd probably have plenty of cheap booze.

So this trip might actually be what a Bama guy would appreciate.  The only thing is....don't be bringing back any rocks or metal rods.  They might be radioactive.
at Tuesday, December 14, 2010 No comments: