There's a Point Where You Retire

At some point in the last week....Barbera Walters came out with her analysis of Representative John Bohener....who is set to become head of the House in a couple of weeks for the Republicans.

Her chief comment?  It was mostly along the line of: 'I think he might have an emotional problem'.

There was a point around 2001 where I watching a Larry King interview and I realized that Larry really wasn't up to the task anymore.  Larry was just going through the motions and mostly lowering himself to lesser standards.  It was OK for CNN because folks were dopey enough to accept that and watch anyway.  In the past two or three years....they've lost numbers and things are obvious.

I have to be honest here on Barbera Walters....the last decent interview I noted with Barb....came from the 1999/2000 period with Monica Lewinsky.  I might include the Al Gore interview in 2004, but it was simply a lucky shot.  The rest?  All in a level you'd expect of Larry King over the past decade....maybe three-star at best....sometimes lower.

To be honest....you might get better interviews with Matt Lauer of the Today Show, but Matt has a certain softball pitch that really helps pitiful folks come across as terrific.  Barb's interviews rarely help anybody as far as I can see and they certainly aren't worth much for the viewer.

Barbara is one of those icons who probably had some terrific moments in the 1970s and 1980s.  We could say the same of Larry King.  You'd hope that the network would eventually realize this and look for fresh new prospectives.
at Wednesday, December 15, 2010 No comments: 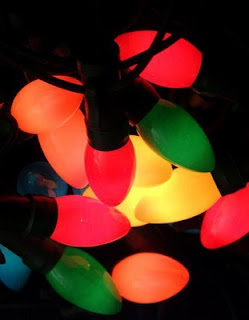 This morning....I kinda got off ten minutes late, and noted on the way into the Pentagon that cop cars were pretty active.  Everyone was kind of excited.

I didn't ask any questions and just entered the building.

What apparently occurred around 7AM was some guy looking over into a trash can and noting some blinking lights.  Naturally, he got all excited and told the cops.  In the twinkle of an instant, with Santa's anxiety on their shoulders, the cops felt it might be a suspicious package.  So the whole Pentagon METRO station was shut down.

A bomb team was brought in and they spent almost an hour on the look and see over this blinking light situation in the garbage can.

Finally, they decided that this was a batter-operated blinking Christmas ornament, and gave the thumbs up.

This all-clear was given around 8:44 AM.

This is the sad situation of life around DC today.  Every single thing is a suspicious object and it's making life miserable for folks.

The train was stopped from passing the METRO site for at least thirty minutes.  And when they let it pass....they refused to let it stop at the Pentagon for another thirty minutes.  So a bunch of guys got off and had to figure alternate means of getting over to the Pentagon.  I'd estimate that over 10k folks were affected by this Christmas light episode.

I was introduced to teleworking this year.  Actually, they made me take a class so I could properly telework if necessary.  Course, I don't have a government-procured laptop, so teleworking would be mostly impossible....unless I used one the dozen-odd teleworking centers around the DC area.  Some of these are as far off as Woodbridge (20 miles to the south) and Spotslyvania (40 miles to the south).  There are a couple of these within Arlington and Alexandra...making for an alternate location.

Interesting news in that GSA came out yesterday and announced the telework locations contract will be ending in March of 2011.  So if you wanted to make use of them....you've got roughly three months left that you could do this.

I sat and often wondered why you'd want to go over to some other site rather than operating your laptop at home.  You could sit and drink your own roasted coffee....have breakfast while you work....and perform all the various actions necessary with your job.  In the summer months....you could sit on your patio and probably write some of the best summaries of your life.  I thought these telework centers were mostly bogus.  The most you might get out of this was to hang out with other folks and meet characters that you might not ever meet.

The cost savings? GSA hasn't offered the amount they pay for these centers.  I'm thinking it's a minimum of $1 million per year for each center...maybe even $3 million.
at Wednesday, December 15, 2010 No comments: 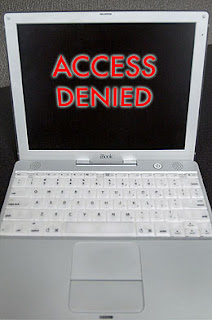 This is a sad woeful tale in a way.  Today, the Air Force finally took the step of blocking news sites that prominently feature the WikiLeaks database of US classified data.  This list of sites will include the New York Times, the British Guardian, France's Le Monde and German magazine Der Spiegel.  Altogether....twenty-five sites.

So if you were an Air Force guy browsing the internet....at your office or shop....and were to go over to one of the twenty-five sites....this screen would pop up and say "ACCESS DENIED. Internet Usage is Logged and Monitored."

The key feature to this is that if classified ever appears on your military-provided CPU, then it must undergo a wipe.  From my organization....security episodes automatically incur a $10k cost factor.  That means my boss has to ante $10k out of the organizational funds for one simple case involving a security episode.  Don't ask why it's a nice round number like $10k or why so much for the analysis or wipe involved.

I sat and paused over this.

The first publishing of secret data started on 25 July 2010....roughly six months ago.  For any Air Force CPU that had cruised to it prior to this magic moment today....you get a free ticket.  You basically have some classified on your office CPU but the 'magic Gods' of Air Force communications can't grasp that fact.

Then you have this funny fact that only the Air Force did this....not the Marines, Army, Navy or Coast Guard.   Will they follow in line with this?  It's hard to say.  Typically, they would.  The fact that this was not a consolidated effort....makes you wonder.

There is this phrase that you use for classified material....declassifying.  Typically, there is a board or an appointed individual who goes forward and reads through a thousand-odd messages and signs a document to say that these are now unclassified.  A decade ago, there were still documents from WW II and the Korean War that were classified.  Most of those have been reviewed and found to be unworthily of keeping secret.  If you asked one of these experts....most would agree that the secretness value goes downhill after a decade.  Most people laugh over the idea that some things from the 1960s are still worth keeping as a secret.  For me, this declassifying job is probably the one job I really wouldn't want because you end up stamping each document as satisfying a list of requirements.  You could spend an entire hour reading a one-page document and asking yourself ten questions.

When will the 100k-plus documents be declassified?  It won't happen anytime soon (my assumption).  In fact, it could be five to ten years before some President might appoint a commission to accomplish this.

A comedy?  Yes.  A bunch of Air Force folks are sitting there and wondering what the New York Times has that threatens national security.  The comm guys are trying to explain this in a manner that everyone can understand.  People are standing there and asking if there were issues back in July, and the kid from the comm squadron just grins and says yes.  And everyone stands there laughing over the amount of effort and man-hours to protect secrets which aren't secrets anymore.  Some people will even get medals for their efforts in protecting secrets that aren't secrets anymore.

So as you go to sleep tonight....rest assured.  Someone is protecting your nation's secrets and non-secrets.
at Wednesday, December 15, 2010 No comments:

A question was made to the soccer chief of the world.....FIFA President Sepp Blatter...over the gay problem in picking Qatar for the 2022 World Cup.

Qatar....if you didn't know....is really fairly anti-gay, and no, they aren't going to be changing their attitude over the next ten years.

Blatter paused over the question, and kinda suggested that the best approach would be to avoid all sexual activities during your stay in Qatar for the games (a decade away).

The curious thing about this whole topic...is that the US military is based in Qatar, and in the months ahead....will likely toss the "don't ask-don't tell" policy....which means gays in military uniform will arrive and perform illegal acts within the country.  No one has asked the Pentagon yet about their situation with Qatar and if they had any comments.  My guess is that some Marine general is prepared to suggest avoiding sex to help make the peace in Qater, which will upset a bunch of folks.

It would be nice if you could find a nice place, with no issues, for world cup games....but after you toss out Tonga, it's pretty much a limited number of nice places.

My guess is that a bunch of gay guys will run out on the field of the first world cup game and attempt to have sex.  The Qatar guys will be upset and demand that they just stop this foolishness, and the media will film the acts world-wide to 188 countries.
at Wednesday, December 15, 2010 No comments: