There's been alot of commentary over New York City, Philadelphia and various airports in the region that left thousands stranded.  A number of folks are pretty hostile and upset with New York City management and think some folks in the snow removal business ought to be fired.

I sat and pondered over this....then went to Moscow news.  Same type of story....thousands stranded and the airports around Moscow are in terrible woes.

Yesterday, Putin (the only absolute leader on the face of the Earth)....finally came out and told the city and airport management folks to stop the whining and get to work.

Then Putin directed that no one in city or airport leadership ought to be planning on New Year's vacations unless this mess if 'fixed'.

There is a lesson in life that I learned long ago....when you have a mess on your hands....don't waste time blaming or explaining how you got that position.  The first and only thing on your mind ought to be to fix the problem and use every resource to do that.  At the end.....you write up a lessons learned package and make sure everyone contributes.  For every minute that you waste on explaining yourself....you could have done the same minute working on the repair plan.  In this case, Putin is right.  Get to the problem and make folks happy.
at Thursday, December 30, 2010 No comments: 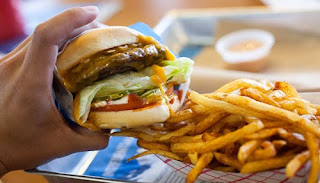 We have a local burger franchise (actually from Colorado)....that only features organic and grass-fed burgers.

These guys are the ones looking for a catch to get you into their operation.  So after the healthy but fat burger....they have a total of 106 different drink options.

I tried to imagine a place with so many choices of soda.  You don't normally go to a burger shop because of the sodas....but the mere idea that you could have 106 choices....might make you weep as you enter the door and try to pick just one soda.

This Elevation Burger operation hasn't been around that long but it is building new franchises six states.  I'm guessing it's an unusual place that would fit for the business crowd....if the prices are right.

As for organic burgers....strictly advice from a guy from Bama....it's still loaded with fat.  If it makes you feel better that the cow only ate natural grass and never had any hormone treatment...ok.  But if you go to most cattle farmers in Bama....they'd admit they don't feed their cows anything but grass, hay, and some corn.  None of them would ever waste money on hormones or such.  The cow might get some dusting treatment, but that's the worst you could expect.  So you aren't getting much for your feelings over being organic.
at Thursday, December 30, 2010 No comments: