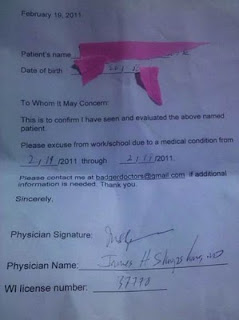 As this mess has unfolded in Wisconsin over the past week....I've come to mostly amused.  It is a comic opera of sorts.

From Friday and Saturday....a twist occurred.....with doctors appearing in the crowd of protesters (mostly teachers) and handing out excused medical letters.  Basically, it's a form letter and says that the doctor has examined the patient and given them that work day (or the next work day)....off.

Typically, you have to show up at doctor's office and have an actual exam.....and maybe in half the cases....the doctor will sign something to suggest that you should be excused.  Flu, fever or cramping are enough to do this.

In serving twenty-two years with the Air Force.....I was able to get a grand total of two excuses (for three days total) off.  It wasn't exactly easy to get such excuses while in the military.  When I retired....we got no sick leave as a contractor.....so you didn't ever ask for such excuses (they were worthless).  Over the past year as a actual government worker....I have yet to have any excuse necessary (in some ways, I should thank God for decent health).

The problem with these dimwit doctors in Wisconsin at the rallys.....is that they were videotaped handing out the excuses.  There was no exam.  The doctors were signing one after another.  No fee was collected (I'm guessing his or her hospital will be curious about how these were paid for).

A number of folks now have these excuses and will use them in the coming week.  I suspect someone will approach the state medical board and request an investigation.  The last thing that a medical board would want to do....is get into political affairs....but they would be required to open a case.  I would speculate that they will call the doctor in and they will ask a dozen questions.

Discipline in this matter?  The board might just give a verbal warning and get off the hook.  Some folks might take the amusing step of moving to a court environment and challenging each single case where the excuses were presented.

In the end....a bunch of lawyers will be involved and charge fees to the state or to the teachers or to the doctors....to clear up the mess.  The lawyers are the only winners when something like this occurs.

Today?  Well....its a fresh day and I would speculate more fun and amusement in Wisconsin.  What we need....is a fantastic three-foot blizzard to dump enough snow to keep folks at home.  But I kinda doubt we'd be that lucky.
at Sunday, February 20, 2011