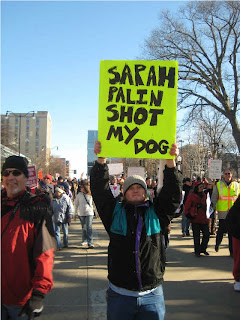 To be honest....I've been at a total of three demonstrations in my entire life....and they were kinda by accident or as an observer.

I watched the video from Madison, Wisconsin, and I've gone through the fifty odd pictures that have been posted across the internet of the demonstrations.  Then I sat and pondered upon what I saw.

Frankly, there needs to be a training camp or classroom environment set up to train folks on how to demonstrate.  If you go into a demonstration, and your message or sign is stupid.....folks take note of that and you lose points.  In the case here....the sign conveys Sarah Palin is running around and shooting dogs, which MSNBC has yet to report (they've reported her shooting bears and small varmints but not dogs).  So folks read the sign and kinda associate your participation as a joke. 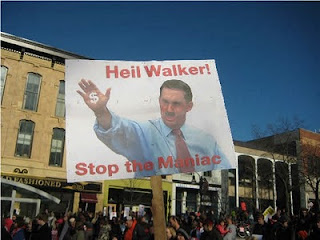 Then we come to the Hitler folks.  For most of you who relentlessly keep bringing up Hitler and the Nazis.....it worked in the 1940s and 1950s....but time has passed and to be honest....it doesn't sell anymore.  If you asked a dozen kids around age fifteen....most can't even associate Hitler with Germany, and three of them might say that Hitler came from Texas originally.

Even if you thought Hitler-mania would work....you need to just Hitler's face and not some other joker from Milwaukee or Madison. 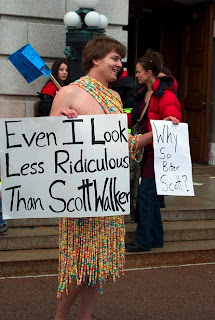 The stupid slogan business?  Well....if it sounds stupid when you say it ten times....it probably is stupid.  And folks see this on TV....talk to the neighbor, and they all have a laugh.  You didn't accomplish much of anything.

Then we come to the kids that you have out and participating in the demonstration with you.  If the kid is under fifteen....you can bet that he or she is mostly miserable and begging to leave after 60 minutes.  It may look great for the camera but most folks shake their head because Johnny barely knows the multiplication tables and you've got him jabbering away about pensions and unfairness.

Conversations with reporters?  If you do a bit of weed before coming out to the demonstration and start acting dopey....stay away from the reporters.  If they ask a funny question and you are all pepped up on some 4-star weed.....then you say some silly stuff and everyone has a laugh.  Again, your message isn't selling...it's just sinking.  Dump the weed for the day and try to act straight and coherent when the MSNBC reporter comes around to you.

Using signs with profanity?  Don't worry...MSNBC will not use your sign in any report....neither will ABC, CBS, NBC, or CNN.  Oh, but don't worry....Fox News will use it and you look like some dimwit with twelve key phrases that all start with "F**k" at the beginning of each.  Your message tends to sink because the profanity wasn't necessary.

Finally, your friends, neighbors and boss watch episodes like this on the twenty-four a day news channels. If you look stupid....don't you think that Grandma will call you tonight and ask if you were doped up when at the parade?  If you say some extremely controversial things....don't you think the boss will remember these?  If your neighbor listens to your lightning-strike commentary and identifies you as a nut.....that ID won't go away for years.

So, if there ever was a case to have a training camp, this demonstration in Madison probably showed that to be true.  Just some humble advice from a guy who just watches and observes things....and not much of a radical on anything.
at Sunday, February 20, 2011