I sat and found this today...American Idol being run in Kazachstan....and actually...this kid is pretty good. 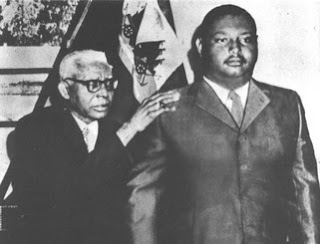 In the history of dictators...none have ever returned after being kicked out....until today.

It's been over twenty years since "Baby Doc" got on the plane with his entourage and suitcases of money....and left because of pressure from western governments.  "Baby Doc" ended up in France and the cash that he brought along....was mostly gone within three or four years.  His entourage ended up breaking up and drifting off.  His wife left him.  "Baby Doc" ended up as a taxi driver for a number of years.

Haiti has a legendary connection to the Duvalier family.  "Papa Doc" was considered one of the most ruthless dictators of the past century.  His son "Baby Doc"....never really had a chance to take off and give anyone much of an impression.  He might have been a four-star dictator....he might have been some wannabe dictator with style and grace.  He might have even been a reformist dictator (we've yet to see one of them).

My guess is that Haiti has descended down to a point where anything constructive....even bringing in a dictator....would be a positive move.  A huge crowd to greet the guy?  It'll be curious.  Anybody over the age of thirty probably remembers "Baby Doc" and probably would support the guy....because of the ongoing circumstances in the country.

My fascination with this?  Here was a guy who just packed up and left his home with an entourage, cash, and a trophy wife.  He lost all three.  He became a taxi-driver on the streets of France and just survived from week to week.  You have to imagine that behind the scenes over the past year or two....a couple of political figures finally got around to the idea that bringing "Baby Doc" back....was the best situation for everyone in Haiti.  And you can only imagine "Baby Doc" sitting there in a dark French cafe....sipping French-roasted coffee and suddenly being approached by a couple of Haitian guys in suits.  It's a made-for-TV movie....if you ask me.
at Monday, January 17, 2011 1 comment: