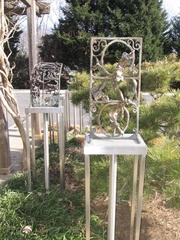 As most of you know....I live in the Arlington area....with DC and Maryland just a stone-throw's away.  There's always a five-star moment each week....that drives home the screwed up nature of DC.

This week....the folks over in Maryland have this Dennis & Phillip Ratner Museum.  Apparently, they'd paid out $90k for these bronze statues and had them on display out in the garden area of the Museum.  Some guy came up over the weekend, and stole them.

The thief then showed up at Montgomery Scrap....and sold the bronze pieces for $150.  The more that the boss looked at the bronze pieces....the more that he thought they were unique.  So he finally called the cops.  So the cops come up....gaze over their theft records....and then admit...it was art.  Stolen art.

The Museum says this art is "damaged beyond repair".  I looked at the picture (before the theft) and kinda wonder if you couldn't take broken art, and make it twice as valuable by damaging it a bit.  So maybe it was now worth $180k as a artistic piece of broken art?  I'm guessing that being from Bama.....limits me in this area, and I'd be best not to discuss this.

I kinda looked at the picture, and eventually decided that those pieces mostly looked like bar stools....made out of bronze.  What bothers me here....is that the bronze material likely ran around $500, and the artist then pocketed around $89.5k total for this act of putting everything together.  I could walk around Bama and find a hundred guys who could have put the pieces together over a weekend and been willing to accept $1000 for the work....but they'd rather you not tell anyone that they were into artist bronze work.

We've got a problem here with too much money in our hands, and then labeling things as "art".....when any kid could make things like this.

This week, they led off with a Governor Palin story....that her husband Todd finally got caught cheating.

After reading the entire piece twice....I came to realize that all of their information came from an e-mail source only (thepalinmorals@hotmail.com). The only piece of the story that the Enquirer has been able to confirm....is that yes, a lady was arrested in Alaska in 2010 on the charge of maintaining a house of prostitution. Her name: Shailey Tripp. That's it...they haven't confirmed much of anything else.

I could go along with this story if Todd had computer problems and thought that Shailey could fix his laptop, but I'm thinking Todd is smart enough to find a real technology repair shop....and not a Computer-Repair Shop/Lusty Massage Therapy shop.

I have to be honest....I'm not much of a Governor Palin fan and I'd normally be looking for more entertaining stories.  The problem in this case is that the Enquirer is drowning itself with 1-star stories without content or fact.  If I had to pick a magazine with a limited future....it's these guys.

At one point....they had fantastic weekly stories over Micheal Jackson, Anne Nichol Smith, and Bill Clinton.  Things over the past decade have kinda gone sour, and I think the team at the Enquirer is mostly looking for just about anything.  They might even be willing to accept a story or two over Senator Harry Reid.  It's sad to see how far they've fallen.
at Thursday, January 20, 2011 1 comment: