A New and Improved Hank Kimball 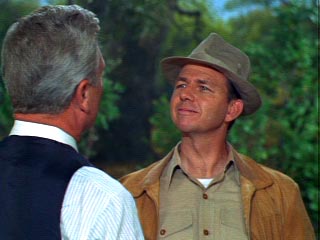 This week....an interesting article came out concerning the U.S. Department of Agriculture (USDA).  Those kindly folks have decided that farmers just don't understand enough about global warming or the "carbon markets"....so they are creating a program where specialists will be hired, and told to go out and educate the American farmer.

For those who haven't followed the news over the past year....most of the 'carbon trade markets' have shut down because of a lack of business, or in the cases within Europe....the cops came around and started arresting for folks within the system for illegal use of the program (and hints that the mafia also got into the carbon business as well).  So there's this question in my mind over why you'd even talk about the 'markets' when they are mostly all shut down.

It's a odd thing....the USDA....walking around and talking of how these specialists will come to influence farmers.  I grew up in rural Bama and know first hand of how farmers tend to question anything new.  These folks aren't exactly idiots.  If you can't feel or touch something....it's non-existent in their mind.  The idea of some smart environmental guy driving up into a rural community and talking folks into some belief of carbon credits or global warming....just won't appeal to many folks.  Added to this....a number of farmers have a year or two of college....so they know statistics and have a fair understanding of science.

I sat there a while and finally pondered upon this.  The typical government agent to all farmers....is Hank Kimball (the dude from Green Acres).  Frankly, you got the impression that whatever Hank said....if you did the opposite, you were fairly successful in what you were doing.

Hank Kimball was the government's answer to dumb farmers.  Across America....the USDA put out thousands of Hank Kimballs.  Most quietly sat in their county office and would go out to speak at high school classes or arrange a demonstration of a fertilizer product for the locals.  Most felt lucky to just be employed after four years at some state university and realizing that their education was mostly worthless unless they got into a big fertilizer company or became a design engineer for John Deere.

I can imagine Hank Kimball standing there and trying to explain carbon credits and global warming.  After a while, the farmer is going to ask three tough questions which Hank can't answer.  Hank will start to grin, and the farmer will grin....and then everybody will realize that Hank is an idiot.  He'll be accepted around the area, but no one will take his fancy science talk serious from that point on.

It's interesting how we've come full circle....back to the days of Hank Kimball and his lack of influence on the American farmer.
at Friday, January 21, 2011 No comments:

Just An Observation Over Pensions

Imagine that you were a state employee of California for thirty years.  You've retired in the past three years, with a annual retirement pension of $125k per year.  Yes, shockingly enough....you moved up every three to five years and kept getting three percent yearly pay raises.  Added to this...are the health benefits....worth another $12k a year.

The state is covering this $137k a year in cost for you.  In fact....there are ten thousand of you folks in California who pull in $100k or more a year on your state-job pension.  Cities, counties, and the state.....are all suffering greatly because they never understood the implications of another $3k raise here, a $5k raise there, and an eventual salary of $160k for a guy who manages forty-odd folks at some county office.

This week, there was an article with the New York Times.  Apparently....folks in the administration and around Congress are quietly working on this new bankruptcy concept that states could declare, and then trim off all of this pension cost in a matter of days.  No one is quiet sure of the end product yet, but it would appear that by summer of 2011...this will be pushed through the congress with both Republican and Democratic participation.

So we shuffle back to you, the retired pension guy in California....58 years old....and collecting your total package of $137k a year.  The odds are....your pension will be cut by 35-percent (my humble guess).  The states probably would like to cut the pension by half but I'm thinking that folks are worried about more mortgage defaults if Joe the retired state worker has only half of what he planned to have in retirement.  Cutting Joe by one-third might be safe and at least ensure the state economy isn't screwed over too much.

As for your feelings as a retired state worker in this situation.  I'm guessing you will be hostile and angry.  You worked your entire life and knew precisely what you'd make at retirement.  You bought a home and make $3k a month payments on it.  You own a nice BMW.  You take vacations to Alaska each summer.  You spend $3k for Christmas presents each year.  You probably enjoy a 5-star retirement situation.  And it's sinking fast based on this upcoming change.

Two decades ago....you could have predicted all of this and warned people....but it didn't matter.  Everyone thought that it'd just keep going.

So in the months ahead....as you watch a dozen states declare bankruptcy....listen to the folks cry and weep over the interviews as they tell you of the missing $35k in pension they suffer from.  Most folks in the south will scratch their head because they don't even take home more than $18k a year from the state pension.  They can't imagine how any fool ever got $100k a year.
at Friday, January 21, 2011 No comments:

Around eighteen months ago....over in central Georgia....Clay County came up with a major problem with it's school system in the county.  The folks who hand out a national accreditation to county school systems had announced a very unique situation.  The Southern Association of Colleges and Schools (SACS) had come to evaluate the county's schools...and put them on a one-year warning episode.  They were actually going to remove their accreditation.

Typically....at the high school level....most folks never even think about this.  But in today's atmosphere, if you were to graduate from a school system without an accreditation....you can pretty much forget about attending any college system in the US.

Clay County's school board suddenly got tossed into a blender....and it became apparent that half of the problems that the county suffered....were direct causes from the school board.  Some folks left, and some folks were forced into a position where they had to get along....in order to get things accomplished.

The Atlanta school situation is starting to appear in the same fashion....chaos within the school board.  At the heart of the matter....is the head of the school board.... Khaatim Sherrer El.

Khaatim is kinda interesting.  This is a guy who is 29 years old and head of a public school board.  He's actually been on the board for six years....meaning he made when it was 23 years old.  His big comment on public affairs?  "Youth activism was always his thing."

Based on a number of newspaper comments out of Atlanta....Khaatim has major connections to a number of political figures in the Atlanta area.

I sat there pondering over this.  I seriously doubt there is a school board in America....other than the Atlanta district....which has a head of the board who is under the age of forty.  The odds of some guy who was 29 years old being able to keep a educational board and dozens of school administrators focused on the problems at hand?  Maybe one guy out of a hundred.

The outcome of this threat from SACS?  Clay County ended up getting awful serious in a hurry....ironing out their communication issues and stopping the bickering at the board level.  In this case....the 29-year old guy has to come to grips with leadership and authority....which I'm guessing several political friends are now suggesting to him to back out or leave the board.

And if SACS dumps the Atlanta schools?  You can imagine this massive jump of the brighter kids in the district as they bolt and parents dump their kids off in the counties next door.  You need the accreditation....otherwise, it's all a waste.

Even in Bama....you can't imagine a scenario like this....where the locals would find the wisdom of voting for 23 year old guy to the board, and then six years later putting him in charge.
at Friday, January 21, 2011 No comments: