Just two or three miles over from my place...is the Iwo Jima Memorial.  It's managed by the National Park Service.  To be honest....they just finished up a $2 million renovation project.  My last trip over there, around October....I came to admit it's probably one of the best and more maintained memorials around the DC area.

In the last couple of weeks....this Iwo Jima foundation has suddenly appeared on the scene....a private group that more or less appeared out of thin air....and they have an agenda to fix the Iwo Jima Memorial which has major issues (at least in their mind).  Strangely enough....most of their 'fixes' revolve mostly around adding a visitor center and bathrooms.

They had an interview with the DC chief of the National Park Service, and he was kinda peeved.  He walked the film crew around the whole place....and he could only note one possible defect on the memorial.  He didn't really want to get into the topic of the visitor center or the bathrooms.

The problem with adding more structure to the grounds there (there's ample space)....is that you start to incur cost.  A nice visitor's center would likely cost around $500k a year to keep someone there and to heat & cool the place.  That also would include the cleaning and general maintenance of the visitor center (air conditioning has to be included too).

As for the bathrooms?  It's a funny thing.  There are none there.   I stood there for about two hours and watched tour bus after tour bus pull up.  I was the only person there who'd walked (from the cemetery) over to the memorial.  All the buses had bathrooms.  It's hard for me to see a reason for the bathrooms except that bus bathrooms are so damn small in nature and most of these WW II vets probably hate using them.

You get the impression from reporting that this memorial foundation is some organization designed to take in a fair amount of money....pay some management folks at the top.....and build onto the structure of the memorial with things that are questionable.  A meeting is slated in the next day or two between the park service and this foundation.  I suspect that fix or two will be agreed upon, and maybe the bathrooms.  Currently, with decreasing national funds for the park service....I don't see this visitor center ever being built.
at Wednesday, January 26, 2011 No comments: 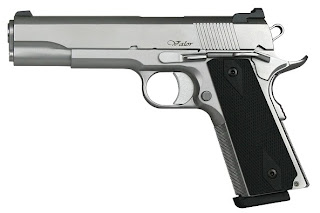 You can often tell when state business has slowed down enough....that state legislators get to a point where they start to discuss the topic of a state flower, a state chainsaw, a state pick-up, or a state poem.

This week, Utah got around to discussing the idea of a state gun.  You would have thought that Bama or Georgia would have been first, but Utah claims that title.

This topic of discussion has upset some folks.  The idea of discussing weapons in this fashion stirs up the anti-gun crowd who think it's inappropriate to think about such things.  I'm more of the mind that you need to limit the legislative crowd to a mere 60 days a year....to prevent episodes like this.

At some point, you'd start to have discussions over the state spoon, the state eraser, the state peanut butter....maybe even the state wrench.  These guys need to be sent home at a point like this....to clean the garage, landscape a bit, or to wash the dog.
at Wednesday, January 26, 2011 No comments: