A Moment on Egypt 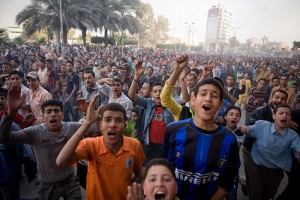 If you watch MSNBC, CNN, or Fox News this weekend....it's about ninety percent Egypt.  Frankly, in a way....I appreciate this because I've become dang tired of political analysis and a minute-by-minute analysis of the Tea Party, Sarah Palin, the President, gun control, and the economy.  We kinda need some diversion, and Egypt's little mess fits nicely.

The trigger to this?  Well....going back to the 1970s....Egypt was heading toward potential issues with various groups who had an agenda.  So folks stood up and said that they wanted stability.  The band-aid created?  Stability.....1000 percent stability.  The business arena grew.  The tourism climate grew.  The banking community grew.  Exports grew.  Hotel construction grew.

You'd think that lots of folks would be happy....but the blunt truth is that the economy grew but the little guy on the street rarely saw any of that growth come back to him.  Then you toss on the various political groups who fell into a pit and could not been seen or heard on a national level....especially if you were pro-Islamic in nature.

So a moment has occurred where all the right and wrong reasons were in a line and tossed the government into chaos.

The end result?  Mubarak's dream of getting his son in a position to assume the Presidency is now cancelled.  The Vice President installed....who ought to make the military happy....is likely facing an up-hill battle and will likely stay six months max.  The elections talked about....will bring in a pro-Islamic government.  Business in Egypt?  I would imagine a forty percent decline over the next eighteen months.

Tourism?  The biggest hit.  You might actually see a ninety percent cut on this, and it was the 'baby' that brought in foreign currency and actually put money into the middle-class who provided services related to the tourists.

Years ago, I bumped into a German who had been on a cruise of the Nile.  He'd gotten off at the right port and walked around some small shops that specialized in leather.  Then he stumbled on a place that had 4-star leather saddles.  It was the variety and style that would run around $2500 in Germany.  The Egyptian there was pricing his around $500.  The German smiled and offered a deal....ten saddles at $450 each, and the Egyptian had to pay for him and saddles to get back via taxi to the cruise boat.  The deal was made and the German ended up at the Frankfurt airport paying a customs fee of $400 each.  The funny thing is that he ended up selling the saddles and financing all of his next three trips via the profits from the saddles.

Egypt has various dynamics that entice people to make deals and spend days and weeks on vacation there.  The sad thing now is that it might all be screwed up....if people aren't careful.
at Sunday, January 30, 2011 No comments: