A Moment in Time in Cullman

Today....Cullman slipped into the world of alcohol....forever damned if you ask of the the local Baptist ministers.  A license package was taken over to the city hall in Cullman today.  The paperwork was actually finalized around 1:40PM for the local Catoma Mart (over at the intersection of Eva Road and Alabama Hwy. 157).

Precisely thirty-five minutes later....a beer distributor drove up and unloaded stock at the Catoma Mart.  There weren't any drums or bugles....or a marching band.....or deacons from the local church to urge patrons to avoid sin by drinking.  In fact, we really don't know who the first guy in Cullman was at the Catoma Mart to buy a six-pack of beer.

The sad part about this.....it might have been some out-of-towner who just stopped to top off his tank and just saw beer up on the counter and bought a six-pack....never knowing that a mere hour before, it was a dry city.

My guess is that around 5PM.....a group of guys began to show up and bought various six-packs....and then drove home to watch the local news and sip cold Budweiser.  They'd done it before but this time....it would have felt legal and ethically ok.

Somewhere in the history books....for Cullman....the Catoma Mart will be legendary.
at Tuesday, February 15, 2011 No comments:

Email ThisBlogThis!Share to TwitterShare to FacebookShare to Pinterest
Labels: cullman

Local Corruption and $ in the Bra

Living in the DC region....means that you have to read up on corruption almost daily.  Today...we had another update on the former Prince George's county chief executive (Maryland)....Jack Johnson.  Jack was leaving his office toward the end of last year....but the FBI came to realize that he'd taken thousands in bribes....so they rigged up a bust.

The curious part came out today....as the FBI was at the front door of the house and Jack's wife Leslie was calling up her husband to get instructions about the money they had in the house.  You can imagine the scene....FBI at the door....Leslie talking to Jack on the phone....and the FBI guy listening into a tapped line.  So this was the conversation:

The curious thing about this scene is that Leslie had a $100k check in her hand which she was supposed to flush down the toilet.  She had started out stuffing money in her bra....and apparently got to a point where there just wasn't going to be anymore money to put into the bra....when this call occurred.  Jack's advice was to stuff the rest into her panties. 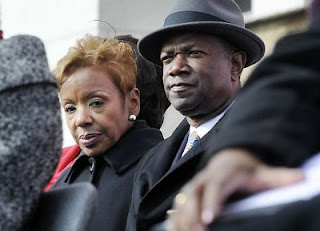 If you were wondering about the size equation of Leslie....she's not exactly a 200-lb gal.  I'd guess that she's maybe a 120-lb gal at best.

I'm guessing the FBI guys listening into the conversation were mostly laughing.  It was crazy to keep that much cash around the house....just waiting for a bust like this.  When the FBI finishes....then you have to worry about the IRS folks asking questions.

The only way for Jack and Leslie to avoid a bunch of issues here....is to finger the other county council folks and lay out the method of how things work in Prince George's county.  My guess is that a bunch of folks have emptied out their house and cleansed their hard drives....waiting now for the cops to arrive at the front door.
at Tuesday, February 15, 2011 No comments:

There are times that I hate admit being from Bama.  This week...another episode came up to remind of that.  The Birmingham City Council folks recently figured out another week to get themselves deeper into debt.  The story made me laugh for the most part.

When the episode finally got noted in the news....then the council folks stood back to realize how many folks were in on this act of stupidity.

The deal was....they were to spend $360k to send 168 local Birmingham folks to a national neighborhood convention in Alaska.  Curious?  It was supposed to be in Anchorage and involve the Neighborhoods USA conference.  The Birmingham City Council had dreamed up this idea to charter an entire plane and just take folks up there.

Reality sat in this week and the leadership of Birmingham finally settled back and decided that further review was necessary.  They hinted that alot less folks would be going to Alaska.  They didn't say how many.....which meant that further analysis would be necessary.

At some point in the discussion.....Councilperson Lashunda Scales stood up and reminded everyone that neighborhood leaders are unpaid and you need things like this to improve the morale and motivation of the community volunteers.

Then at another point....the chief of staff for the mayor stood up and made a brilliant comment: the higher cost of the trip was dictated by the distance.

I would imagine that the analysis of the chief of staff could be worthy of a Nobel Price for Science or such.  I sat and pondered over this.....it's 4221 miles.  I checked and thats how far it's from Birmingham to Anchorage.

My suggestion for the 160-odd folks....round up three Trailways buses with two drivers on each bus.  Give everyone a twenty-pound bag of grocery items from Piggly Wiggly....mostly ham, baloney, cheese, Baby Ruth bars, Hostess Cupcakes, pecans, and a loaf of bread each.  Toss in sixty cases of beer, Mountain Dew and buttermilk for everyone to sip.  Then you take off and stay on the road for 90 hours straight.

You have to figure in six stops for gas and flushing out the toilet onboard. Plus an hour or two at the border of Canada while everyone gets their picture taken with the Canadian customs gal (Wanda Jean).

The neat thing is that these Bama community leaders would get a chance to meet each other and up close.  They could chat about Bama, football, NASCAR, neighborhood crime, septic tanks, John Wayne movies, their family sorrows or such.  They could play poker the entire way.  They could sip free beer and buttermilk.

I'm pretty sure after 90 hours straight on the bus....they'd get off in Anchorage....make a speech or two....and be ready to jump right back on and head for Bama.  They'd likely arrive back and never bring up any community business the rest of their lives....and probably curse travel by bus like the rest of us.  Total cost for three buses to Alaska?  Well....by the time you toss in the free bag of food, the free beer, and the clean-up cost (lots of flushing necessary)....it'd be around $100k.  We'd save some money and help make folks really motivated to fix up their neighborhoods and avoid trips like this in the future.

For you folks in Birmingham....I offer my regrets.  Most towns in Bama won't be sending anyone to Anchorage but we don't really need to meet with other folks to tell us whats wrong with our town.  We kinda already know whats wrong....and it's a money problem (the lack of it).  It didn't take a trip to Anchorage to figure that part out.
at Tuesday, February 15, 2011 2 comments:

Living in the DC region.....there are things to occur which make you shake your head.  There are very few WalMarts in this region.  You'd think that there'd be a dozen WalMarts within thirty miles of Arlington, and there just isn't a significant number.

Over the past year, WalMart has come up and declared a project to put four stores over in the DC region.  You'd think that folks would be excited and all pepped up over the store coming.  Instead, there is anxiety and fear.  The latest got mentioned in the Washington Post today.

The locals are now talking about these new WalMarts in DC being a magnet for shoplifting.  One ward commissioner actually suggested that DC teenagers wouldn't even hesitate to come in and steal from the store.  The DC ware commissioner then suggested that DC's youth would end up with criminal records because of WalMart (yes, actually blaming them).  WalMart came right back to suggest that they would have adequate security in each and every store to put enough fear into customers not to rob them.

Other residents speak of a fear that WalMart would harm the Mom-and-Pop shops around the region.  To be kinda honest....if you ask folks, they admit that half the stores that were around in the 1980s....have collapsed because of crime anyway.

They had a rally against WalMart yesterday.  It was a pretty serious event....where seventy folks did show up but the Washington Post admits that twenty were associated with the media, so there were barely fifty protesters against WalMart.

At some point.....I've started to think of DC as being some third-world banana republic island....totally unconnected to the rest of America.  To have so much media attention focused on anti-WalMart behavior....and yet.....in the whole district, there's probably a 90-percent approval rating for WalMart.  It just doesn't make sense, except in DC.
at Tuesday, February 15, 2011 No comments: