Frank Buckles died this week.  He was not really a legendary sort of guy until the last year or two....when it became obvious that he'd be the last GI left from World War I to die.  As time quickly passed....Frank was interviewed and gave various impressions from this era of 1917.

An episode has brewed up this week as some West Virginia congressmen and his daughter....have pressed to  have Frank lie in state in the US capital rotunda.  Being the last GI....in their sense.....ought to earn the right.

The leadership of the House and Senate (both Reid and Boehner) have quietly said no.  To lie in state at the US capital rotunda is a pretty rare event.  Normally, it's reserved for Presidents, Congressmen, and Senators. I went and did some research on this, and it's an impressive list: 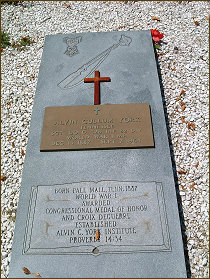 It's a curious thing, because I kept digging into the history of the Rotunda.  They (Congress and the Senate) did want Sargent Alvin York of World War I fame to be in the rotunda when he died.  The curious thing is that his wife said absolutely no.  She wanted him to be left alone, and buried in the hills of Tennessee where he grew up.

Then the folks at the Nashville capital building came....and they wanted Sargent York to be on display there, and she said no again.  Alvin is buried in Pall Mall, Tennessee.  His grave?  It is simple and to the point.  I doubt if Alvin ever wanted much more than that.  He probably would have had a laugh or two...if he'd known a bunch of political folks wanted his body run to to Washington to be put on display at the rotunda.

For Frank Buckles relatives.....it's an honor that they think he is deserving.  I don't typically argue points like this.  I went over and viewed Frank's history.  It's a funny thing....he entered the war at the very end (at least he enlisted as such).  They had shipped him off to England but he arrived there at the very tail-end of the war.....and never stepped foot on any battlefield on the European continent.

If you signed up and agreed on Frank being in the rotunda....some folks would come out and make the comment that he might be the last solder from World War I, but he never stepped beyond British soil....to the battlefields in France, Belgium and Germany.  Maybe in some way he represents a great moment in American history....but we tend to ask too many questions these days.  We would find a dozen reasons to disqualify him because we simply wanted to qualify the "truth".

I'd like to see Frank get a 5-star moment at Arlington Cemetery.  To be honest, a number of us from the Pentagon would likely take two hours from our job and attend his ceremony there.  There might be five to eight thousand folks lined up to show the man honor where he deserved it....amongst comrades.
at Sunday, March 06, 2011 No comments: