A Taste of Will Rogers Today

Will Rogers often said that he could read a paper and produce a dozen episodes of humor on a daily basis.  I'd like to start that practice....to a lesser degree.

A UK ice cream shop came out with breast milk ice cream (don't worry....it'll likely never occur in Bama).  Some folks from the local council....the city district....got all peppy and shut them down until they did health tests.  Yes, it had to be proven that breast milk was ok to use in ice cream.....with actual real tests.  After a complete battery of tests....the British scientists agreed...it was safe.  The ice cream shop?  They are discussing a lawsuit against the town because they were closed and kept from making a profit.  The ladies providing the breast milk?  It's best not to drag them into this lawsuit.

The Homeland Security folks are in a pickle of sorts.  Their big investigation into gun running various weapons into Mexico has run into a snag.  They really weren't willing to put effort into it.  We now know that some idiots were walking into various gun shops and buying ten, twenty, and even thirty M-16 assault rifles.  The minute that a guy wanted a second or third....something should have gone off with the Homeland Security folks.....but they had bigger fish to fry.  The weapons? Ended up in Mexico.

Stanford University is now accused of having easy and simple classes for their sports-minded students.  Their choices?   Beginning Improvising, "Social Dances of North America III" and "Interpersonal Relations."  I was kinda wondering about Social Dances I and II, but it's best not to bring this up.  They say they will stop this practice....but you can only wonder if this means the football team is in trouble for next year.  My real question is....what kind of degree would you get for "improvising"?
at Wednesday, March 09, 2011 No comments:

The Problem With Taxing More

I've noticed over the past twelve months....a number of folks at city, county, state and federal level....who believe taxing the rich more at this time....makes the best sense.  They want to maintain the status quo and believe that the rich simply aren't taxed enough....so taxing more is acceptable.

So I'm ready to offer up a simple story.  Joe ran into a bit of money, and eventually ran out to buy a boat.  He had a big engine on it and it could hold eight folks.

Joe called up Karl.....his best buddy.....and said to bring a couple of friends....and they'd go out on the lake Saturday.

Karl came....with nine folks.  This was way over the limit for such a boat and it was generally unsafe....but Karl really didn't know better.  Joe just accepted this.  So they launched.....with ten folks on a eight man boat, and twenty cases of beer.  It was fairly overweight, if you can imagine such.

About four miles down stream....Joe stopped.  Shortly after that....Joe noticed the boat was sinking.  It was a light leak of sorts and he felt they should return to the dock.  Karl argued.  They waited and drunk beer as they discussed matters.

Time went by, and the boat was taking on more water.  Joe felt there was a problem.  Karl argued but then agreed that Joe ought to take a can and just start catching the water in the boat and toss it overboard.  The plan, Karl argued...was that everything just keep going...while Joe bailed out the water.

Joe did a decent job for a while, as the guy consumed beer and kept partying.  For every can of water he tossed out....there was 1.2 cans of water coming in.  As you can imagine....Joe was a bit worried about this and wanted folks to appreciate what he was doing.   No one did though. 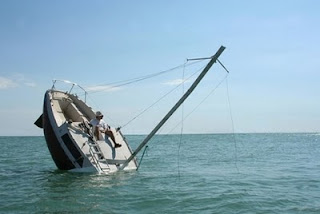 Karl start cussing.  He's mad at Joe because everyone is going to get wet.  Joe wanted to make for shore after the leak was found....but Karl and crew just didn't see the urgency.

As the boat sinks about sixty feet from the shore....and three miles from dock.....Joe has an appreciation of bailing and what it means.  At some point, it's not worth bailing or helping a bunch of idiots out. You might as well just let things sink to get reality back into a situation.

I suspect that a bunch of rich folks will act like Joe for a while....and eventually realize nothing will ever improve.  And then.....things will get real interesting.
at Wednesday, March 09, 2011 No comments:

A Roadmap for NPR

I sat and read through four significant articles today on NPR and their little comical episode of the week.  Plus I watched a good fifteen minutes of CNN trying to get some points across but mostly stumbling along the way.

At this point....I'd say that NPR will lose fifty percent of their funding.  I'm fairly sure enough Democratic senators will stand up and agree that they get a three year process...with fifty percent cut for 2012, and the rest by 2014.

So I'm offering up this road-map.  First, gather up your donation team and go out amongst the corporations, union folks, and wealthy rich folks....to pepper them for a ten-percent upgrade.  If you get half to sign up....then great.  If not, then tough luck.

Second, go look at your business model and determine who exactly you have on the payroll that really isn't worth that $200k that you've been paying. If you think this is stupid....don't worry.....fifty percent of your team is preparing their resumes and looking for work elsewhere while we speak.

Third...the replacements?  Start them at seventy percent of what the former guy or gal got.  Anybody from management shuffling in and suggesting wild pay situations?  Stop the discussion, and toss the guy out of the room.  He's not there to help you.

Fourth....start reviewing what it costs to run some of your operations from lower cost areas of the US.  Richmond is about sixty minutes away and cost half of what it cost in DC to live.  Is it necessary to run all of NPR's operations out of DC or could you move twenty percent down to Richmond?

Fifth....those towers out in Tulsa, Little Rock and Del Rio all pump out your brandname.  If you choose to keep the big money in DC....and let the tower folks beg off the local donations crowd....then you likely start losing listeners.

Let me offer some advice on who listens.  You might think that a major portion of your audience are the elite more intelligent crowd....but you end up with a third of your folks who are simply on the road and looking for decent broadcast.  If you cast aside the beacons of your brand-name....then you can start reviewing the number losses in twelve months....and it won't be pleasant.

Sixth and final....Congress at best, will be nice and give you this three-year grace period (my humble opinion).  If you haven't gotten your business together by the end of the last year....then you go the way of Air America.  You might hang around in twenty major metropolitan markets in the US....but no one in rural America will know or remember your brand-name in five years.

You can survive on the open market and probably even sell advertising.  You might have to slant your news back one notch....and you might have to bring on Charlie Sheen once a month to get the wacko listeners.....but the name of the game is survival.  Either you want to make it....or you don't.
at Wednesday, March 09, 2011 No comments:

Sometimes....you hear something, and you want to just smile and shake your head.

The White House stood up and wanted to share this vision of a new Education Department agency.  It would require government funding of course.  It's purpose?  Well....they would outline and craft gadgets for classrooms in America.  Something beyond just computers or laptops apparently.

The cost?  The agency would get $90 million the first year.

I sat there....thinking in the trillion dollar period of America now, and $90 million is like you being sixteen and asking Dad for date money and he gives you $15.  I don't think or see $90 million really doing much of anything for development....other than meeting in fancy hotels around the country and just talking about your ideas with a bunch of other engineers who have ideas as well....and you all drink a fair amount of booze for the evening.

I tried to imagine....how we survived in America for 200 years....without the fancy gadgets.  Up until the sixth grade....the fanciest gadget that I ever saw was a projector that the school librarian used to show us these National Geographic reels that they'd get on loan from the county library.  That projector was used several times a week and we felt honored to get this 30-minute report on the problems with Crocs in Australia.

Around the seventh grade, the school got money for one TV.  The idea was that we'd get this beam of educational TV (PBS in its infant period) and we'd get smarter.  The problem was that our level of level of knowledge and the amount of TV time came out to equal about 90 minutes a day max.  After watching one of these TV educational episodes and watching half the class fall asleep...the TV hour was dumped and never used again.  The professors doing these TV shows weren't exciting enough to keep your attention.

For the remainder of my school life....we didn't improve much.  I came to see the same level of technology for the next fifteen years.

So this fantastic idea of technology taking us to new horizons....is mostly dopey talk for folks to find ways to spend tax revenue money.  Math, English, geography, history, and science....still flow at the same level.  You might find ways of using productions from the History Channel to show history in a better understanding, but everything else lacks any connection to technology.