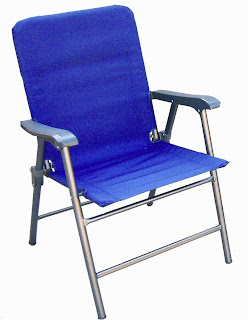 I've come to notice a lot of creative talents up here in the DC region....that you wouldn't typically see anywhere else in America.

This week....the city council of College Park, Maryland woke and decided they had a problem.  Too much lawn furniture on the roofs of houses.  So they passed a law that says you can't sit on a lawn chair on your roof (even if you own the house).

Naturally, this has a $200 fine attached to it and is supposed to encourage safe behavior amongst residents....mostly punk college kids.

This has upset the kids there....saying it's their lifestyle and safety is not an issue.

So I pondered over this.  Here's how it became a problem.  Kids got to a point where they wanted a balcony-like atmosphere at their local house and it had a slightly slanted roof.  They climbed out a window and put up two or three lawn chairs....opened up a case of beer....and just sat on the roof for hours on a Saturday while discussing the events of life.

I'm guessing since furniture is now out....the kids are not idiots.  They will merely adapt and put out blankets and just have picnics on the roof.  Then the city will outlaw picnics.  Then some kids will hoist up two or three old lazy-boy recliners and use them on the roof since lawn furniture is what got banned.  The city will react and toss that out.  On and on....this will go....until the city council has outlawed just everything possible.
at Wednesday, March 30, 2011 No comments: