In our local press today....big cover sheet over the main paper from a local advertisement entitled "Cut Now, Pay Later".

This basically is a slogan program involving Oxfarm, WWF, and CARE.  The guts to this advertisement is that the US government (Congress) is talking about cutting across to the funds given to charity operations or other governments to support life outside the civilized world.  The question in this ad....can we afford not to use one percent of our yearly budget to pay for programs that affect the world.  So it's best to pay now....rather than create a mess that requires a bigger amount of money or funding later.

It's a nifty ad, I must admit.  You are investing to save the forests, wildlife, poor farmers in Kenya, dolphins, native farmers in Peru, the tigers, and a host of things in this world.  Why would you deny them your government funding?

I sat and pondered upon this advertisement for a good two minutes.  Eventually, I asked myself....why exactly did we sign up for a eternal and everlasting funding program for Oxfarm, WWF, and CARE?  Was this a intended thing....permanent funding with no end to ever occur?

I can understand the urgent and ill feelings held by Oxfarm, WWF, and CARE....but the reality is that times have changed since 2008....and we aren't exactly 'rich' anymore.  So if they were hoping to convince folks to continue the one percent trend.....they might ought to review the housing market and how much the US owes in debt.  They might see some things in a different light.
at Tuesday, April 05, 2011 No comments:

From the local area, we have a rather odd development with the Maryland state government, the Prince George's county board of education, and a bunch of foreign teachers.

At some point back during the Bush era, the county jumped on board the 'no-student-left-behind' deal and decided a bunch of teachers needed to be hired.  Strangely enough, they came to decide they had to be foreign teachers.  No politician will stand up and explain this logic now, and I'm guessing the teacher's union were given some kind of friendly incentive to keep quiet and just let this happen within the county.  So hundreds of foreign teachers were hired...mostly Philippine residents.

If you heard this kind of thing in most states....you start laughing and grinning.  Why would you hire a bunch of Philippine college graduates to teach Americans....in the heart of Maryland?  It doesn't make much sense.

So as things progressed with this hiring mess.....the county stepped to the side and avoided paying the visas involved and all the fees.  This is illegal but the Prince George county board folks just kinda looked the other way.  So the federal government eventually came around asking stupid questions.....and this week....a fine was extended to the county.  They have to pay the foreign teachers for the fees involved, and this gets up to around $4k per teacher as a minimum....maybe more.  All total?  Four million dollars are involved.

Does the county have the four million laying around?  No.  That's the curious thing.  They would have to cut massively across the program and find various ways to tax the locals even more....to cover this fine.

The reaction?  Well....the county says they will appeal.  The odds of beating this?  I'm guessing it'll take two years but they will be forced into the corner.  As for the regular teachers now?  They have to be wondering if positions are cut....just to pay these foreign teachers.

Yes, it's all kinda amusing and the way that things work up here in the DC region.
at Tuesday, April 05, 2011 No comments:

In the Local Neighborhood 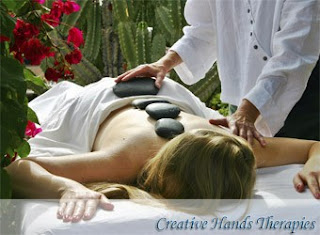 This morning, I opened up my emails.  I get daily offerings from Washington Post advertisers.  Today?  I was offered a hot rock sensational feeling for $42.  Normally, it would have been double.

The problem for me....being from Bama....I tend to look at the picture and imagine a bunch of hot rocks from some campfire....just scolding hot....and I just can't see any good therapy out of this except a burning smell, red spots on my back, and feeling nauseous.  And I'd pay $42 for this?

The funny thing?  These are nice black flat creek rocks (my description from Bama).  We've got hundreds of billions of these laying around Bama and I'm wondering if we should not be picking these up and selling these to folks who need sensational feelings.
at Tuesday, April 05, 2011 No comments:

Just in case you didn't see it on CBS, NBC, CNN, or ABC....our Fed chairman kinda stood up and admitted that the high rate of foreclosures will continue right along for all of 2011, and he is simply hoping that 2012 gets better (note: hoping). Whatever thoughts you had about a "recovery" being in progress....it has yet to start in terms of housing.

We had some local nut....Susan Burns...from the Alexandra area here, who turned up at the National Art Gallery just over the river. She ended up at some Gauguin painting called “Two Tahitian Women” which is a bit lusty and descriptive of lesbians. She felt it was "very homosexual" and wanted to burn the painting....but only got as far as tearing off the wall before the room guard jumped her. When the cops finally came....Susan wanted them to know: “I am from the American CIA and I have a radio in my head. I am going to kill you.” Cops pulled out her records, which was kinda fascinating....she had about two pages worth of charges: carjacking, disorderly conduct, trespassing, and assault on a law enforcement officer. I'm simply going to take a guess....but I'd make a educated guess that she was bi-polar. As for "Two Tahitian Women"....I've actually been to the same art area and seen the same painting. I simply thought they were two hot lusty Tahitian women waiting on some Bama guy to arrive at the island. I'm guessing I have a very different art interpretation than what Susan had.

The odds of a federal government shutdown this week? I'm guessing twenty percent. Frankly, unlike all the CBS and CNN experts who have appeared on tv from various think-tanks....I don't think it's such a bad thing. In fact, if you gone out in 1965 and suggested the government was shutting down for ten days....most folks wouldn't care except the social security recipients. The sad thing will be that most news organizations won't have any material to print except bear attacks, beer truck crashes, and barn-burnings. It might be sad and woeful period for those stuck on CSP*N.

This is the week of remembering the shooting over Doctor Martin Luther King. In case you were curious and may have often wondered why Doctor King was in Memphis that fateful day....it was over a union strike in the city with sanitation workers. The union wanted four-star publicity and a pump-up by Doctor King. Memphis, in case you were wondering....really didn't want to negotiate with the union. If you take this information and lay it across today's template of events....you might understand things more.

Yes, Scott Pelley will be the new CBS guy....replacing Katie Couric. Normally, I wouldn't make predictions on this...but I'm guessing a ten-percent bump on viewers in the first month. As for Katie, she says she will be this afternoon interview queen in 2012. Don't expect that show to last long.

Finally, McDonalds says alot of it's shops are going to a 24-hour operation....so they need 50k more employees and will be hiring very shortly. If you had suggested to me that they'd turn into a 24-hour operation thirty years ago....I would have laughed. Obviously...a number of folks need a burger or two at 2AM and this just makes sense. It might also explain the continuing expansion of waistlines in America, if we cared.
at Tuesday, April 05, 2011 No comments: