There's a discussion going underway in Texas....to raise the speed limit to 85 mph.  Most Texans would approve of the measure.....with around thirty percent probably very negative.

If you've ever been to Texas....from end to end in a drive....you'd admit that it takes forever.  I've made this drive completely across on two occasions.  By the time you toss in a break....a lunch....and at least one fuel episode....you end up spending most of a day crossing the state.  This might cut out an hour....at best.

After fifteen years of driving around Germany....at speeds of even 90 and 100 mph.....I don't have a big deal with speed.  You need to drive at the speed you feel comfortable with and I suspect for most of us....it's 70 mph.  Toss in the fact that you need to have the right tires on the car....if you intend to go over 75 mph a majority of the time.  And finally, there is the vehicle and its condition.  You'd be stupid to drive a 1984 Pontiac at 85 mph, and it probably wouldn't be smart to drive a Jeep of any type at 85 mph.

The one thing I learned from the speed-driven Germans....if you get up around 85 to 90 mph....and have a blowout.....the odds are that you will crash and at least harm yourself.....and statistically, the odds are in your favor of harming a second vehicle.  In these type of accidents.....survival is 50-50.  If you were in a bigger vehicle or a Audi or Volvo.....you probably will survive, otherwise, you should have your will already finalized and let Karl Junior know that he will not get the fishing boat.
at Monday, April 11, 2011 No comments:

A Review: Letters From America 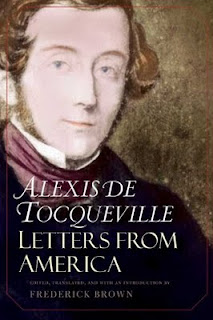 I spent the weekend reading through a 5-star book..."Letters From America".

It is a historical piece which might interest you.  There were these two French guys....Alexis de Tocqueville and his buddy Gustave de Beaumont, who were French lawyers....junior lawyers of the government, if we must admit.  Nobody remembers Gustave much....but Alexis ends up with this note in American history.  You see....these two guys were young and fairly bored with the French life that they'd been handed.  They cooked up this fantastic field trip in the 1830s....that they would go and find out how prisons in America functioned.  The French government didn't care as long as they weren't in a paid status.  Both were counting on their dads to cover the cost of this trip.

So they come to a young and vibrant America, and kinda discover that prisons are a bit unique....but the nation is just plain unusual.  The quotes from Alexis drive home this point.

As one digs deeper into the national character of the Americans, one sees that they have sought the value of everything in this world only in the answer to this single question: how much money will it bring in?
The Americans combine the notions of religion and liberty so intimately in their minds, that it is impossible to make them conceive of one without the other.
The greatness of America lies not in being more enlightened than any other nation, but rather in her ability to repair her faults.
The whole life of an American is passed like a game of chance, a revolutionary crisis, or a battle.
There is hardly a political question in the United States which does not sooner or later turn into a judicial one.

The two French gentlemen had this knack for observing and asking questions....and then they wrote what they saw.  Frankly, it's an observation that works in the 1830s and even 2011.

So if you were sitting around and curious how much (or really how little) we've changed in two hundred years....pick up a copy of Letters from America by Frederick Brown.  You might be entertained.
at Monday, April 11, 2011 No comments: