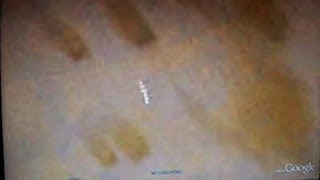 This is what we know.  Someone got around to gazing at Google's Mars pictures.  They went area by area.....strictly a private guy with nothing to do....and he eventually came around to note this image.

The metalic shaped object?  Roughly 150 feet wide and 700 feet long.  The experts are kinda scratching their head.  They want to believe that it's another stone formation.  The problem is that it's awful long, narrow....and would be a different shade of color.

What do I see?  I've seen enough Air Force satellite imagery to say this is four items.  At the top is one item which is 75 feet long.  Then the second is a bit wider, but around 75 feet long as well.  Then you have two shapes which form a slight-L shape, which make up the remaining 500 feet.  There's nothing within twenty miles of this to come even close to this color.

So I'll make my guess....someone landed there long ago, and this is what's left.  Long ago....I mean more than two thousand years ago.  Simply my humble opinion, and I'm pretty sure the guys will strongly suggest it's just rocks.  But rocks don't put off that much metallic color.

Somebody landed....did their colonization effort....came to a failure, and likely went back to Earth (their original lab).
at Monday, June 06, 2011 No comments:

Email ThisBlogThis!Share to TwitterShare to FacebookShare to Pinterest
Labels: mars

The 6th of June

It is the 6th of June.  I typically write on this day of a place far away....where up until the quietness of 6 AM, there was nothing but the waves washing up onto the beaches of Normandy, France.

In a matter of minutes....things changed.  Some men lived and some men died.  Arriving on the beach meant an eternity of doubt on the mind's of men as they wondered how they'd ever survive that morning.

Eventually, the morning came to a close and Germans who stayed....ended up mostly dead.  By late afternoon....the Americans held the beach and things were fairly concrete at that point.

You can imagine the German planners and Generals sitting back miles away and trying to guess the ultimate plan and goal of the united force at the beach.  There were a hundred things that they could have done....to have stopped the invasion in its tracks, but they simply didn't grasp that in time.  And by the morning of the 7th of June.....the invasion was moving out and putting intense pressure on the Germans.

Those Americans who survived that morning and the rest of the war....are left with various memories of the morning invasion.  I can't imagine waking up a single day for the rest of my life, and not thinking about every move I made when I left the landing craft and every bit of sand that I dug out of my fingernails at the end of the day.  I'd probably have the smell gunpowder in my nose for the rest of my life, and I'd probably think about what I did right or wrong for decades.

So in eighteen hours, the 6th will end yet again.  There's a lot to remember and think about today....only because men rose to the occasion and did what they had to do.
at Monday, June 06, 2011 1 comment: