I sat and watched about ten minutes of the Weiner stuff from last night....then turned the TV to some John Wayne western.  Frankly, this guy was obviously lying most of last week as we saw him daily and he was always careful about describing what he remembered.  He now says....even though he is a four-star liar....that he will stay on.  It makes sense to him and I'm guessing some New Yorkers agree.  The problem is that if he resigned....then who takes his place?  An unknown?  That just won't be acceptable.  So you are left with some wannabe comedian who pretends to be a Representative and he sends around pictures of himself in his underwear.  Of all the laws that would be helpful now....if they could only craft one that says you can't send hot lusty pictures of Senators or Representatives to Americans.   I doubt that we'd see such a law though.

CBS news has finally come out and said that jobs are such an issue now....that we are at the level of the "Great Depression".  What's faking us out?  Banks are still in business....that's my opinion.  At the peak of the Great Depression....if you walked up to your local bank....you'd likely find it closed or maybe open but limited to handing you the 2011 amount of $200.  It's curious that CBS would finally say something like this, but maybe they finally found their journalism backbone.

Out in Roseville, Cal.....there was this form that the kids brought home for the parents to fill out.  We all know the form and the twenty likely questions on it.  Well....they added a question in Roseville.  They asked how the kid got delivered (natural or c-section).  If you selected c-section, then they asked why.  People looked at the question and got all upset that this was a whacked out question.  So far, the school district has refused to answer why it was added.  I'm guessing that they asking around and trying to find the dope who added the question and then asking who peer reviewed the form before releasing.  With a question like this in Bama....they would have had to toss in a third option....delivery by stork.  And probably twenty percent of folks would have just put "x" in that column and grinned.

It is believed (without any conclusive data) that almost twenty-five percent of all American hackers....work in some relationship with the FBI or CIA.  I kinda laughed about this comment but the truth is that you can't tell.  If you were attending some Baptist church and learned that a quarter of the membership drink whiskey on a weekly basis....it'd unsettle you a bit.  For the hacker community, you'd have to be watching your front, sides, and rear.....wondering who were your real friends.

Finally, a bunch of journalists have had to pull out their history books and review the Paul Revere ride after comments by Sarah Palin.  Sarah told the story of how Revere was caught, and then told the British the entire threat of thousands of Americans coming to kick their butt.  That's not the general version that most folks remember from high school and their one and only college class.  Well....here's the honest truth.  Revere blabbed in fair detail after the British finally grabbed him.  He was a talkative guy.  He told the British bluntly that they were in deep trouble and just ought to back off.  For some reason....historians and professors haven't liked that side of Revere over the years....so they kinda avoided the subject.  The truth is....Palin was right in her description.
at Tuesday, June 07, 2011 No comments: 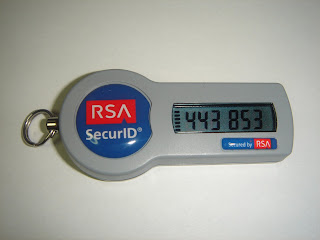 One of the newest breeches of security occurred this week when EMC's computer at Lockheed Martin got busted into.  The curious source of information that the hackers got ahold of?   Well....the data that runs these stupid SecurID's that EMC sells to companies.

At some point around 2004, I was given one of these and there was this ten-minute briefing to explain how I'd read my company e-mail by logging on and then viewing the continually changing six-digit number that would appear.  You had roughly 20 seconds to view the number and then type it in.

It was a curious reaction by most folks that I worked with.  Most simply stopped viewing company e-mail entirely and if something important occurred....then some manager had to download the important e-mail and send it by Air Force e-mail to each of us contractors.

So if you asked folks....the general answer to the success of this secure ID gadget....was pretty dismal.  For some hackers to waste time busting into it?  Well....if that's worth the effort....feel free.  Our contractor e-mails probably aren't worth reading, and by next week...the SecurID folks will have devised an entirely new way of developing the magic number to push out every twenty seconds.
at Tuesday, June 07, 2011 No comments: