A Note From Mount Vernon 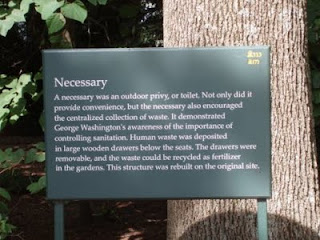 It's a curious piece out of the tour of Mount Vernon....a Necessary.

Basically, this was where all the human waste got dumped each morning.  It collected in the garden-like environment...with soil tossed in....and then taken over to the garden later to dump there.

Distance from the front of Mount Vernon?  Two hundred feet max.  So if you were a guy and had a "need" in the middle of the day....you walked over and did your business there.

It had to smell....being that close to the house, but the social part of the house was on the opposite side....so maybe folks just didn't smell it.  As for the vegetables?  I'm of the belief that they were practicing some pretty unhealthy habits here.

Apparently, Washington believed that this was scientifically proven deal and Martha never argued.
at Thursday, June 23, 2011 No comments: