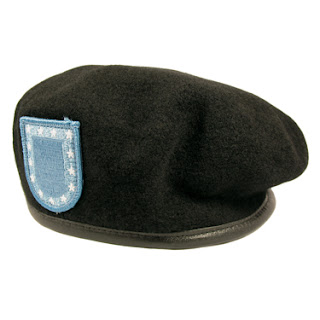 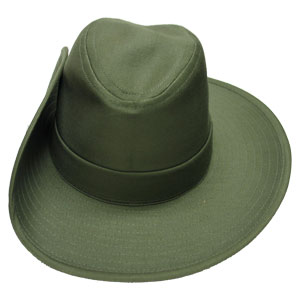 A heavy moment fell around two weeks ago with Army guys.  For years (almost a decade)....the standard hat for the Army crowd to wear....was the black beret.  They hated it.

There was some four-star general who made a decision long ago....that they'd all look sharp with the beret.  There were dozens of problems with it.  It was hot to wear in the south or desert region.  It always took two hands to mount it.  It'd get wet and soggy.  It never kept the sun out of your eyes.

So this year, Army folks complained enough, the boss finally got convinced.  They didn't dump the hat entirely....but it's going to be rare that you have to wear it.....and it's going to eventually disappear.

I sat and pondered over this deal.  In my twenty-two years with the Air Force....I always had this dislike of their hats for fatigues.  They were functional....but that was about it.

Then, I came to Panama for three years.  My unit had this Aussie jungle hat which was issued out to everyone.  It was the most functional hat that I ever wore.  It came with a nylon net that was hidden away into the hat.  You could stand out in a storm for an hour....and it'd never let a drop on your head.  It gave you character and a rustic feeling.

I proudly wore the hat they issued to me every single day.  And I still keep it around today for memory purposes.
at Monday, June 27, 2011 No comments: